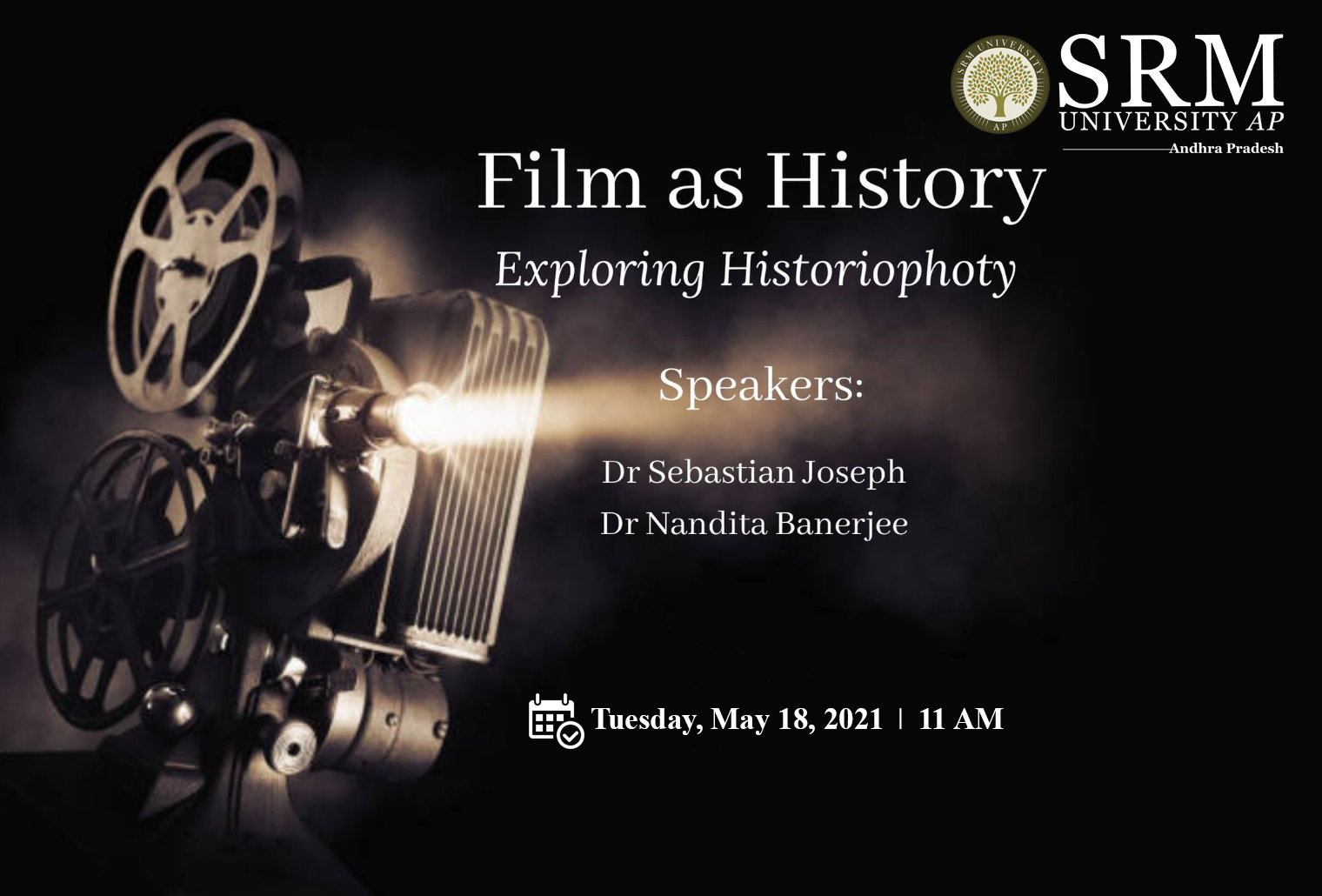 A webinar aimed to discuss the use of films in particular and visual images in general as sources for the reconstruction of History was organized by the Department of History on May 18, 2021. Films as History; Exploring Historiophoty, the first of the monthly Webinar series on new and exploratory themes in History, dealt with the promises and challenges of Historiophoty as a sub-stream of history. Following Hayden White’s pathbreaking analysis of visual imagery and its location in historiography, historiophoty has emerged as a most promising pathway for historians particularly as we move towards a rapidly digitizing world.

Dr Sebastian Joseph, a Historian and Film Critic and recipient of the State Award for Best work on Film History 2020, and the author of Cochin Forests and British Techno-ecological Imperialism in India addressed the first part of the webinar. He compared the textual and cinematic representations of history through the lens of the Historian Robert Rosenstone, who divided the plot of a film into three parts: beginning, middle, and end. Dr Joseph conveyed his knowledge of history and cinema through six distinct characteristics put forth by Rosenstone.

(i) A distinction was made between textual and cinematic representations of history, with the latter presenting problematic and conceptual history in a narrative format for better comprehension. (ii) Cinematic representations of history resemble personal narratives more than historical narratives. The straightforward narrative representation aims to communicate and establish an immediate connection with the audiences behind the cinema screens. (iii) The storyline narrated in historical cinematic representations must have a satisfactory conclusion. Historical representations of films dramatize, personalize, and emotionalize, whereas textual history critiques the emotional aspects, as they can invalidate the credibility of the sources. (iv) Film adds to the overall emotional experience of viewers by using music, sound effects, dialogue, and so on. Dr Joseph deduced from Rosenstone’s fifth and sixth characteristics that the historical depictions in cinema are fictional and reflect the socioeconomic and political conditions of society. At the end of the session, he postulated that “there is a tale behind every story, and there is no way that we can look at films as secondary sources of history, but as the primary source for history and historical explanations.”

Dr Nandita Banerjee, Associate Professor at Sidho-Kanho-Birsha University, West Bengal delivered the keynote address during the second half of the webinar. Dr Banerjee provided a critical analysis of the evolution of traditional art and visual images into digitised form. Historians observed the live depiction of civil wars, conflicts, and protests through the documentation captured on camera footage. Visual evidence such as photographs and records are authentic sources and history would be incomplete without them. She further added that “Learning from history is never a one-way street, and learning about the present in light of the past entails learning about the past in light of the present. History is the in-depth study of the past and present. Images, according to some world historians, are the established method of remembering the past. Since the dawn of human evolution, the visual image has served as a representation of social memories in art. ” She validated her perspective by citing the German war and the Vietnamese conflict, both of which are visible in world history because of visual and oral footage. Dr Banerjee also discussed the enormous influence visual images on audiences and the place it marks in the worlds of film and history.

The webinar came to an apprising close with a panel discussion followed by a Q&A session. 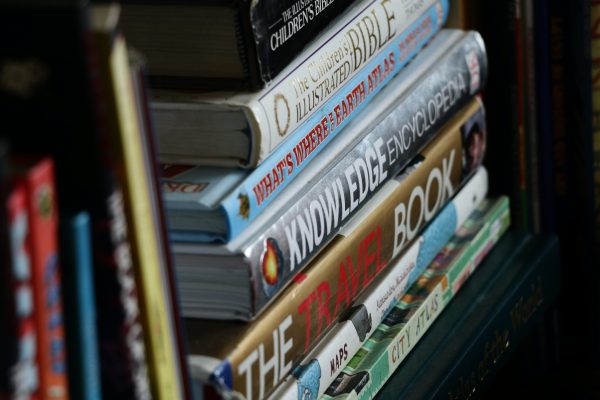 ‘Fostering curiosity and nurturing inquisitiveness’ These have been the goals of the Department of History at SRM University-AP to which Deva Harshalai Nimmagadda, Class of 2021 of Bachelor of Arts in History, belongs.

The entire department and especially his beloved mentor, Dr Maanvender Singh, could not be more proud of him for securing a coveted position in the MS Program in Computer Science at Pace University, New York. Deva found a home for his desire to understand the past and progress towards future in SRM University-AP’s multidisciplinary courses which enabled him to learn more about cutting edge technology and innovative approach to history. This experience was instrumental in helping him achieve his place.

“During my course of studying BA History in SRM University-AP, I have realized that history will not equip you with the skills in only one field, but it also opens you up to diverse fields.” Deva said, “Thanks to the curriculum in SRM University-AP which enabled me to explore various fields like economics, Journalism, Data Science etc. Studying history will demand immense research work and it will refine your analytical skills and these are the skills you need to live in a Tech world. I would like to thank all my faculty for equipping me with such skills even during the pandemic. Today interestingly History major in my profile attracts various employers and projects as they believe in the analytical skill of a history major.”

Prof Singh, who is very fond of Deva Harshalai, spoke very highly about his student, “Deva always cultivated the best attributes a historian could possibly possess- the endless and untiring urge to quest for reason and answers, and the unique and insightful perspective to provide the most logical and comprehensive solution.” He added, “With these qualities in one’s possession one can achieve any ambition should they put their mind and efforts to it.”

“The right skill was cultivated in me, and the right attitude took root.” Deva said to inspire his juniors, “I am extremely grateful to have had the opportunity to call SRM University-AP my alma mater. I am who I am today because of it. I would advise all my juniors to commit to their education seriously and SRM University-AP will give you the experience and encouragement to obtain your dream career.” Deva would like to take advantage of this world capital and invest himself in research and development in the fields of Artificial Intelligence in future. 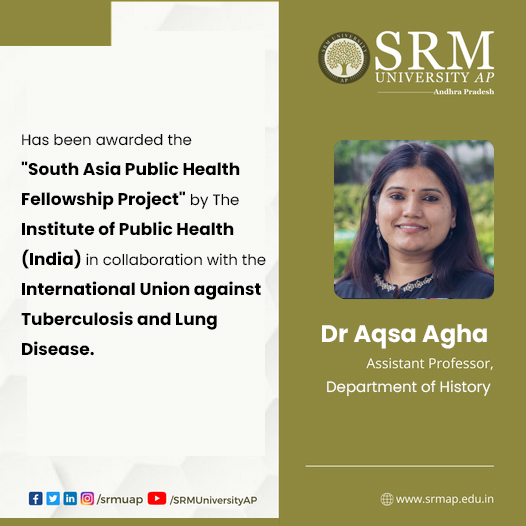 Dr Aqsa Agha, Assistant Professor, the Department of History, has been awarded the South Asia Public Health Fellowship Project by The Institute of Public Health (India) in collaboration with the International Union against Tuberculosis and Lung Disease. As the South Asia Public Health Fellow-India, Dr Agha is expected to conduct research on the ethics of the tobacco industry and submit the report over a period of 8 months, i.e. from December 01, 2021, to July 31, 2022. She has been granted an amount of USD 6660 to carry out the project.

Along with producing a quality case study on India focusing on industry interferences promoting the tobacco epidemic and undermining public policies related to tobacco control, the project entails drafting the regional report on South Asia. It will bring together country-level case studies and implications between December-May, 2022, engaging in the dissemination of the country-level case studies with relevant stakeholders in June-July 2022.

Article 5.3 of the World Health Organization Framework Convention on Tobacco Control (WHO FCTC) acts as a treaty for ratified countries to protect their citizens against the commercial and vested interests of the tobacco industry as per guidelines laid down in the said article. Countries of South Asia, including India, have signed and fully ratified this treaty in the early 2000s. However, the lack of robust national policies and continued influence of the tobacco industry perpetuates the tobacco epidemic, as established in the available literature. Given each country’s mandate to protect the health of its citizens, there is a growing need to understand issues of tobacco industry interferences that undermine public policies meant to protect its population. The South Asian Public Health Fellowship is an initiative to generate knowledge regarding issues of tobacco industry interference not only in India but in other countries of South Asia (i.e., Nepal, Sri Lanka and Bangladesh) to better understand such issues from a regional perspective.

Dr Aqsa Agha holds a PhD in History from the Centre for Historical Studies, JNU. She is also the Project Head of Unnat Bharat Abhiyan at SRM University-AP. Before joining SRM University-AP, Dr Agha was a Consultant with Partners in Change, New Delhi and prepared a report titled “Status of Corporate Responsibility in India, 2020”, focusing on corporate responsibility and ethical business practices. Prior to that, she worked as a Research Officer for National Research Study on Human Trafficking in India at TISS, Mumbai. Before TISS, she worked with the Human Rights Defenders’ Alert- India on human rights violations on the India-Bangladesh border in West Bengal. Along with teaching, she has consulted with organisations, including the Centre for Equity Studies, New Delhi, where she conducted sessions with grassroots activists to effectively observe, analyse and document reality through participatory research. Her broader research interest lies in historical processes and their impact on the social locations of class, caste and gender. 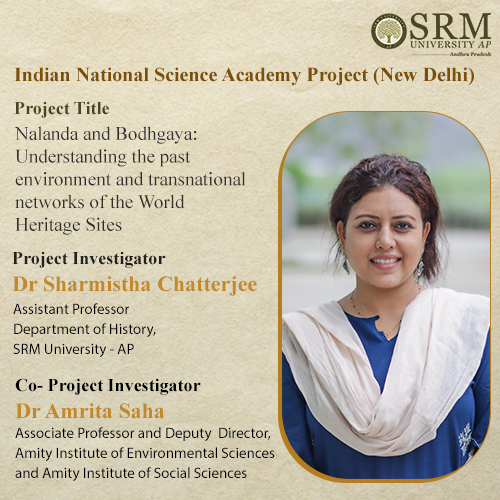 Yet another moment of pride and honour for SRM University-AP as the Indian National Science Academy (INSA, New Delhi) has sanctioned the Project “Nalanda and Bodhgaya: Understanding the past environment and transnational networks of the World Heritage Sites” to Dr Sharmishtha Chatterjee, Assistant Professor, Department of History with a total outlay of Rs 5 lakhs. The co-investigator of the project is Dr Amrita Saha, Associate Professor and Deputy Director, Amity Institute of Environmental Sciences and Amity Institute of Social Sciences, Amity University, Kolkata. The project is a pioneering initiative to make a comprehensive study of the landscape and environmental factors (physical and cultural) governing the Buddhist World Heritage Sites of Nalanda and Bodhgaya (Bihar, India).

One of the first attempts in South Asia to understand monasteries and monastic complexes in relation to the landscape parameters, the work is distinctive in its scope and methodology because of its multidisciplinary approach involving archaeology, history, and environmental science. It aims for a holistic understanding of the sites and the region. Bodhgaya and Nalanda are two major Buddhist sites of India, the first marking the site of enlightenment of Gautama Buddha and the other being one of the oldest educational institutes of ancient times. Both the sites have been witnessing travellers, pilgrims, students, and religious preachers from the farthest corners of the world.

The foremost objective is to investigate the environmental settings (location, settlement geography, palaeolandscape features, layout of the monastic complexes, dietary patterns) of the monastic sites. This will be executed through the generation of a series of maps by superimposing colonial site plans, old maps, satellite imageries and corroboration of the same with extensive field surveys. The scientific study of the topographic delineations, soil samples, and artefactual evidences would be undertaken in the course of the study.

These attempts would generate a detailed study of the regular lives in the two monastic complexes along with the social and cultural ties established with the lesser-known monasteries and villages of the hinterland area. The project also seeks to explore the local, national, and transnational networks emanating from the sites, thus contributing to a global networking. The project is expected to create frameworks for extending the study to the other monastic complexes across South and Southeast Asia. In the long run the work will be published in the form of an annotated atlas featuring the monastic complexes, the wider geographical hinterland, and the transnational networks between India and Southeast Asia. This would serve as one of the noteworthy contributions that puts forth a holistic study of the cultural landscapes of the World Heritage Sites.