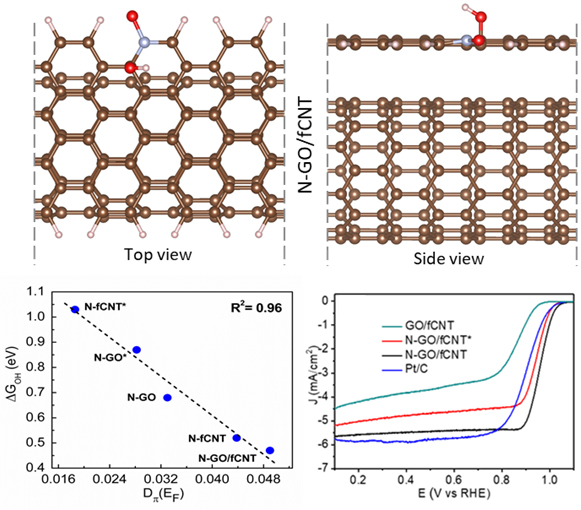 A research paper titled “Nitrogen doping derived bridging of Graphene and Carbon Nanotube composite for oxygen electroreduction” has been published by Prof Ranjit Thapa, Professor of Physics, SRM University – AP, as a co-author, in International Journal of Energy Research, having Impact Factor of 5.164.

In this work, the research group investigated the origin of high catalytic activity of oxidic-N configuration in nitrogen-doped CNT and graphene heterostructure using density functional theory (DFT). We have plotted the free energy profile of the oxygen reduction reaction (ORR) to estimate the thermodynamic overpotential and catalytic performance of the respective active sites. The overpotential is related to the quantifying parameter ∆GOH (with R2 = 0.98) and the π electron density at the Fermi level, defined as an electronic descriptor, which is highly correlated with the ∆GOH with R2 value 0.96. For various N doped configurations, we correlated the ∆GOH values with π electron density at the Fermi level and found that the carbon site adjacent to the oxide-N configuration is a more prominent site for ORR. Further, we show that the oxidic-N configuration in the heterostructure of graphene and CNT is the ideal configuration, which gives a lower overpotential of 0.54 eV for ORR on adjacent carbon sites. Therefore, the charge transfer occurs from underneath CNT to graphene and increases the value of π electron density at the Fermi level which leads to the higher catalytic performance of the active site.

In the early 20th century, fuel cells were invented and their global impact has not reached up to its regular commercialization when compared with battery technology. The fuel cell device could be a powerful technique to generate electricity for large energy demand without greenhouse gas emissions. However, other major hurdles in the commercialization of fuel cell devices are the cost of platinum (as a catalyst), its poisoning and stability. Recently, carbon-based materials such as graphene, carbon nanotubes and activated carbon have been evolved as metal-free low-cost catalysts due to their (i) high abundance/yield (ii) reactivity towards oxygen just by introducing impurities like heteroatoms or other metals. However, identifying an efficient design principle to search optimal doping configurations in various carbon systems is a grand challenge for researchers.

In future, the study aims to propose the effective design principle for various doped carbon systems as a catalyst to identify the optimal active sites and configurations for ORR. The role of π orbital in carbon systems such as graphene, graphene nanoribbons, carbon nanotube, etc is very important and can be a general electronic descriptor to define catalytic activity. Also, π electron descriptors and machine learning algorithms based combined approach can boost the search for ideal carbon catalyst for ORR with low DFT cost.