DIGITAL HUMANITIES: HOW TECHNOLOGY AND COMPUTATIONAL SCIENCE IS SHAPING THE FUTURE OF THE LIBERAL ARTS.

DIGITAL HUMANITIES: HOW TECHNOLOGY AND COMPUTATIONAL SCIENCE IS SHAPING THE FUTURE OF THE LIBERAL ARTS. 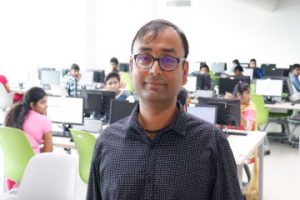 Dartmouth College, Hanover, New Hampshire: At Dartmouth’s April 2019 conference titled “The Marriage of Pre-Modern Literature and Computational Science” experts in the field of Digital Humanities, through a series of papers, will showcase new findings and insights on computational tools used to analyse their subjects, tools that have revolutionised research in the humanities. Three SRM Andhra Pradesh SLABS faculty: Dr. Prateek, Dr. Nibedita Bandyopadhyay and Dr. Rajni are attending the Dartmouth conference to enhance their knowledge of computational tools related to non-English languages, which in turn will allow them to advance their own digital humanities projects. Digital Humanities is a relatively new discipline where computer science and hermeneutics intersect to create new ways to expand traditional literary interpretation, particularly of older texts.  The platform enables scholars to analyse global information on a piece of text or art using focused computational tools and thereby redefine the characteristics of the text.

As Dr. Prateek explains it – “Franco Moretti, a leader in the digital field first drew the distinction between closed readings (the traditional way to read a text) and distant readings where computational tools are applied to vast computer generated data on the text.  In classic Gothic literature for example, a closed reading is likely to bring up imagery of cathedrals and labyrinths. However, a large data base of Gothic writings analysed by digital tools sheds new light, new ways to look at the text not thought of before – like word usage, language frequency, and other observations not commonly associated with Gothic literature.  The focus here is not on language per se, rather how language is being used to evoke emotions associated with Gothic literature. This is where the digital medium helps as it is not always physically possible to analyse 200 texts on a wide range of criteria.”

Dr. Prateek’s interest in digital humanities began during his PhD in theatre studies at the University of Queensland in Australia when his supervisor, Prof. Joanne Tompkins with some of the leading figures in Ibsen Studies published A Global Doll’s House, a project for which she looked at 3787 productions of Ibsen’s Doll’s House worldwide.  The database included the year of the production, the production company’s political affiliations, the prevalent political landscape of the time, casting, particularly of the lead character of Nora Helmer as performed in different countries and settings. This new approach alerted Dr. Prateek to the digital tools Prof. Tompkins employed for a new gender analysis of the text as well as to explain the impact of the prevalent political framework on the production house. “Prof. Tompkins’ project threw new light on Doll’s House in terms of restating the historical record of that time period. This scope of data analysis on a piece of text is beyond what one scholar can accomplish.”

As he set about looking for a text he could relate to for a similar exercise Dr. Prateek settled upon Kalidasa’s ‘Shakuntala’. “I had seen numerous productions of Shakuntala and was familiar with the usual arguments as to why the play should be produced – the view of it as a romantic comedy, the eco-criticism within the forest setting, and feminist leanings. Also, post 1947 when the theatre of roots emerged in India Shakuntala became very valid. For a theatre company to be legit it had to do Shakuntala. Yet, with all this history around Shakuntala and what it evoked I felt with the technology available in digital humanities new readings could emerge.”

Presently, Dr. Prateek is accumulating and building the database of Shakuntala productions worldwide. “In India, I know what kind of companies I am dealing with, like Habib Tanvir, Bhopal Naya Theatre. One aspect of this project is how the computational tools can simulate what theatre would have looked like in that time period – for instance, in 1789 when William Jones did the first English translation- if it was an expression of proscenium theatre or street theatre, also a funding analysis – government or private organisations.”

Drawing a clear distinction between new readings of primary text and the new knowledge that emerges from computational science’s engagement with humanities, Dr. Prateek says, “We are not looking for a new reading of the primary text.  Rather a new way of looking at it, a historiography about the productions of the play that in turn can shed new light on the text.”