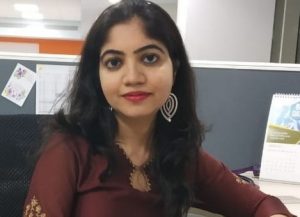 “I analyse texts that reflect the relationship between literature and environment with an emphasis on issues like pollution, resource crises, unchecked development and species extinction.” says Dr. Nibedita Bandyopadhyay who did her Ph.D. in English at IIT Kanpur with a specialisation in Environmental Humanities. Her journal papers and book chapters have appeared in reputed publications like Taylor and Francis and Lexington.

One example of the kind of literary text she speaks of is Ruchir Joshi’s The Last Jet-Engine Laugh, a novel that touches on the subject of resource capitalisation while exploring the generation gap in a Gujarati family over a century of political and social turmoil in post-colonial India.

In 2016, upon an invitation from the American Studies Association, Dr. Bandyopadhyay presented a paper on environmental humanities at a conference in Denver, Colorado. The following year she got a tuition award to participate at a conference in Cornell University’s ‘School of Criticism and Theory,’ where her mentor was historian Dr. Faisal Devji, from the Oxford University faculty.  “It was a workshop where we analysed texts on the tenets of literary theory and criticism such as feminism, post-colonialism, eco-criticism and cultural studies”.

For Dr. Bandyopadhyay the April 2019 Dartmouth conference on digital humanities was notable for both raising concerns about technology and presenting opportunities in preservation and analysis of literary and cultural texts. She emphasises that digital humanities can lead to increased interdisciplinary research that will be fruitful to her domain as well because environmental humanities is a field which constantly engages itself with other fields of research.

The Dartmouth conference was highly successful in its attempt to dispel some of these doubts. One of the keynote speakers, Prof. Sukanta Choudhuri of Kolkata’s Jadavpur University spoke about a project that digitalizes and records works by writers like Rabindranath Tagore. Dr. Bandyopadhyay shares some of her memories of the conference session: “I raised the question of the numerous regional Bengali dialects that can be found from West Bengal to Bangladesh and how to reconcile these variations and differences, and most importantly, the mode of approach. It is a good idea to make digitised versions of classical texts but these must be made available to the Third World countries. It needs to be open to a wide audience, the public at large. Or else it has no meaning.” Here again, Dr. Bandyopadhyay points out the hesitation among some scholars of conventional humanities to adopt digital technologies and how the benefits once clearly understood can help overcome the diffidence: “They are just not comfortable with the medium. We need to build a real collaboration between Computer Science and Humanities because digitalisation depends on the operation of programming languages that belong to computer science. Digital technologies can in fact help in three important ways – digitization can record certain lost texts on environmental studies, simple online tools like hyperlinks can connect a large community of users to digitised texts, and computational technologies like Voyant can provide analysis, and this applies to environmental studies too”.

The computational tools in digital humanities are not confined to literary boundaries. Dr. Bandyopadhyay points out how these technologies can also access the natural world. “Digital tools can help to record the population and extinction rates of species in the natural world as well as take note of global warming and climate change. It is a new and challenging approach as not much work has been done in this area of research.”

In the coming semesters at SRM AP, Dr. Bandyopadhyay, who has taught Communicative English to SEAS students and creative writing and fiction analysis to SLABS students, will look to infuse SLABS course work with elements of digital and computational tools and introduce students to the immense possibilities. “For example, once we select a text and create a situational context, the students, many of whom come from technological backgrounds, can actively participate in digitisation exercises, access computational tools and even develop new programs to expand research and facilitate the analysis of literary texts. It will make the journey even more exciting for them.”