Amidst the quarantine, students of SRM AP and members of NEXT TECH LAB, have exhibited their expertise in HACKNITR, a national level hackathon organized by NIT Rourkela on 21-22 March 2020. The outstanding merit of their project has enabled them to bag the Runner-Up and 2nd Runner-Up position at the hackathon. 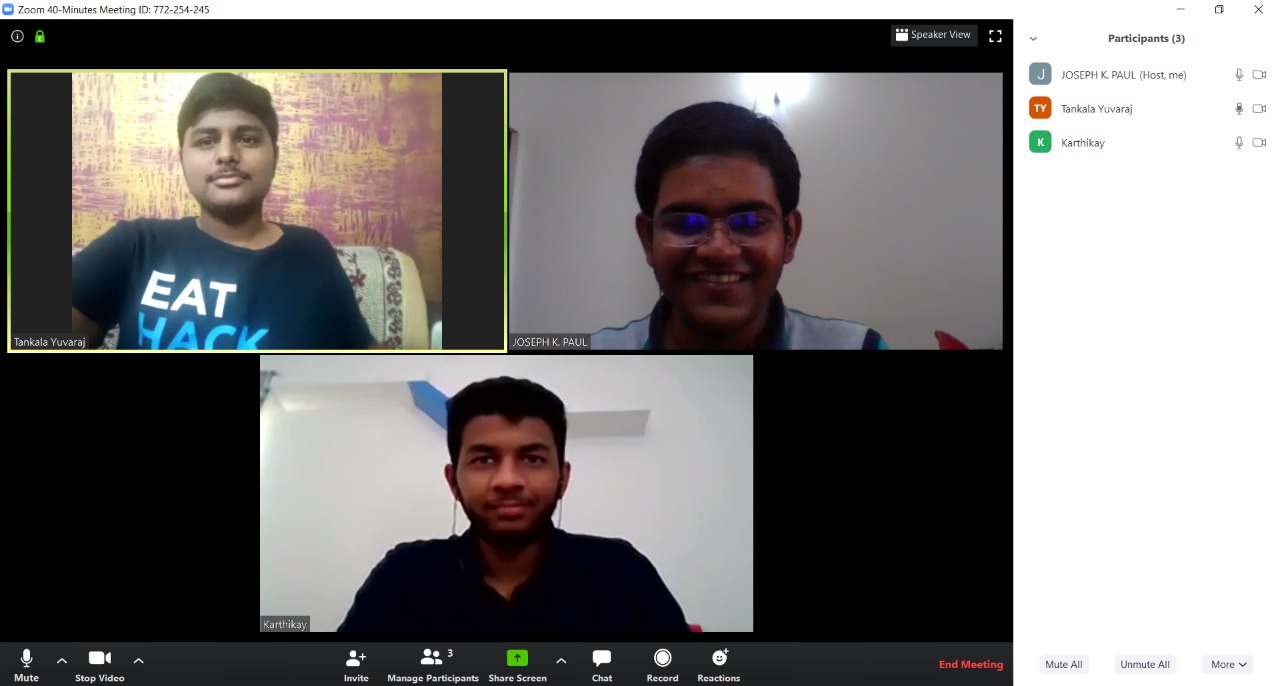 Team ASTUTE BOTS, comprising of 1st-year students, Tankala Yuvaraj, Karthikay Gundepudi and Joseph K. Paul, was recognized as the Runner-Up. They used the AI-IoT platform to develop DRONEYES; a prototyped solution that can be used to reduce poaching. It is an aerial reconnoiter which flies in stealth mode and takes the video or photo of a suspected poacher. This is done by the highly trained object detection model called YOLOv3. These eyes not only detect objects on the terra firma but also sends the exact location via GPS. “With the help of cloud technology, we can share the data in real-time so that the user/organization can take the required initiative by locating the exact place of poaching”, explains Karthikay. We were inspired to attend hackathons by Anshuman Pandey, and Next Tech Lab supported this achievement.

Another team PUSH, where Karthik Epperla, 2nd year, and Ishita Agarwal, 1st year, participated, has received the 2nd Runner’s up award. The students worked on an AI-VR-Blockchain based application to help people with autism improve communication, social and other basic abilities required to live in a society. It gives a set of YES/NO questions that are to be answered by either the parent of the child or the adult suffering from Autism and then it matches those answers with the dataset which then returns the level of autism that the child/adult is suffering from. Depending on the level, the user can choose the extremity of VR therapy. When the child goes through the VR session, the parent can view what their child/ adult is doing in the virtual environment using the parent app from anywhere and advise their ward offering extra support to the patient. ” Our application has 3D simulations of real-life situations wherein autistic children/ adults (mostly children) can practice and understand how to behave/react in those situations and overcome their fear while facing a similar situation in real life. “, adds Karthik.

Karthik acknowledges Adithya Ramakrishnan the founder of Next Tech Lab and his lab mate, Lakshmi Vallala for implanting the noble idea that AI can help in the rare medical condition, Autism. They have constantly been in touch with a few special schools and treatment centers to know about the behaviour and nature of autistic people so that they can keep on building different versions of applications.

In the natal stage of their academic career, the students are guided and nurtured in an environment by the Next Tech Lab and the faculty members which inspires them to positively impact the society. The ample exposure offered to the students will not merely encourage them, but also enable them to improve their concepts.

The novel coronavirus has evolved as a pandemic which forced lockdown in many countries including India. The sudden surge in symptomatic cases requires funding for medicines, diagnostic kits, research to develop vaccines, development of medical infrastructure, as well as assisting daily wagers. The entire nation has risen to assist our Indian government to raise funds for the noble cause. In the premise of supporting the government to combat the outbreak, SRM University AP, Andhra Pradesh has offered its support to the government in every way possible.

Pro VC and Director CLM in discussion with the Education Minister

The contribution of 25 lakhs was handed over to the Hon’ble Education Minister Dr. Adimulam Suresh by Pro Vice-Chancellor Prof. D. Narayana Rao, Director of Campus Life and Maintenance Venkataachalam and Media PRO, Venugopal. In this distressing scenario, all the citizens of India are requested to combat against this pandemic by staying at home and taking adequate preventive measures. Dr. P Sathyanaranan, President of SRM university- AP said, “The COVID-19 Pandemic has created an unprecedented global catastrophe and a national public health emergency. In this crisis, the measures taken by the Government of Andhra Pradesh under the leadership of the Hon’ble Chief Minister to combat the COVID-19, leaving no stones unturned, is commendable.”

Earlier this week on Monday, responding to this calamity, SRM Group donated 1.15 crore on behalf of the employees of the institutes under the umbrella of the group. Dr. TR Paarivendhar, Chancellor, and Member of Parliament transferred the fund to Tamil Nadu Chief Minister’s Public Relief Fund.

SRM AP has commenced online classes to ensure that imparting of knowledge to the students is not hindered by the pandemic. View details here

Dr Sutharsan Govindarajan, Assistant Professor of Biology at SRM University-AP has published two papers in highly reputed journals, “Nature” and “Nature Microbiology”. Both papers involve the discovery of novel strategies used by bacteriophages (viruses that kill bacteria) to overcome the bacterial CRISPR-Cas system, which are molecular scissors that are programmed to cut DNA. His findings have massive implications on the society as it has the ability to reshape the boundaries of the Phage-therapy in curing diseases.

In the paper, “A bacteriophage nucleus-like compartment shields DNA from CRISPR nucleases”, published in ‘Nature’, researchers from the University of California San Francisco, including Dr Sutharsan of SRM University-AP, discovered that certain large bacteriophages called “Jumbophages” are capable of protecting their genetic material (DNA) from being cut by the bacterial CRISPR-Cas system. In nature, the primary function of the CRISPR-Cas system, which is famous for its genome editing applications, is to cut the DNA of bacteriophages. The researchers made a surprising finding that several CRISPR-Cas enzymes were utterly ineffective in cutting the DNA of jumbophages. Subsequent studies led to the finding that these bacteriophages protect their DNA within a protein compartment called as ‘shell’. The shell provides a ‘safe room’ for the phage DNA and keeps antiviral enzymes, including CRISPR-Cas enzymes at bay. It is the first-time researchers have found that bacteriophages, which are essentially viruses, can employ one strategy to protect its DNA from many different immune systems. Dr Sutharsan says, “usually, this kind of sophisticated DNA protection mechanism is employed by complex eukaryotic cells like humans. However, our findings show that viruses, which have evolved billions of years before eukaryotic cells, also seem to be using a similar strategy. This is mind-boggling”, says Dr Sutharsan, “because our finding is making us to rethink about the current understanding of the evolution of cells on Earth.”

In another finding, which is also co-authored by Dr Sutharsan, the researchers have found a different kind of bacteriophage that protects its DNA by ‘turning off’ the production of the CRISPR-Cas enzymes in bacteria. Thus, this bacteriophage employs an entirely different strategy for the same purpose, i.e., protection of its genetic material. The paper “Bacterial alginate regulators and phage homologs repress CRISPR–Cas immunity”, got published in the journal ‘Nature Microbiology’ very recently.

Dr Sutharsan further explained how his research can play a pivotal role in the application of Phage-Therapy, which is a therapeutic strategy where bacteriophages are used to kill antibiotic-resistant bacteria and cure patients suffering from difficult-to-treat bacterial infections. Currently, the success rate of phage therapy is low, and researchers are trying to find the reasons behind this. Dr Sutharsan thinks that CRISPR-resistant bacteriophages, which he studies in his lab, can be a game-changer in phage therapy. However, this idea needs to be tested. Towards this goal, he is currently seeking collaborations with clinicians interested in phage therapy.

When asked about his future research plans, Dr Sutharsan says the “Laboratory of phage-bacteria interaction”, which I am going to establish soon at SRM University – AP, will involve in the discovery of new molecular mechanisms employed by phages and bacteria to defend against each other. Such studies have given us’ Restriction enzymes’, which started the ‘era of gene engineering’, and ‘CRISPR-Cas enzymes’, which started the ‘era of genome engineering’. We hope that our lab at the SRM University – AP will make discoveries that can take us beyond genome engineering.

Department of Science and Technology, Government of India has awarded Dr. Sutharsan Govindarajan, Assistant Professor, Department of Biology, SRM University-AP, the prestigious fellowship “Innovation in Science Pursuit for Inspired Research (INSPIRE)”. This initiative provides funds and a platform to potent young achievers for conducting independent research and strengthening the Science & Technology base. Dr. Sutharsan is to receive a total research grant of 35 lakhs for a period of 5 years as a DST-INSPIRE fellow.

Dr. Sutharsan will establish an independent research lab at SRM University, AP, Andhra Pradesh to focus on CRISPR-Cas biology. “CRISPR technology is a powerful tool for editing genomes. It is capable of changing a single base of DNA out of billions of bases. This invention is potent to cure genetic disorders, enunciating its candidature to receive the Nobel Prize in the future.”, informs Dr. Sutharsan.

Dr. Sutharsan’s research work has the potential to nullify the single limitation of the CRISPR technology- ‘off-target’ effects i.e., unintended base changes that affects the accuracy of DNA editing. Through his research titled “Discovery of novel CRISPR-Cas silencing proteins”, he and his team intend to prevent ‘off-targets’ by identifying and characterizing the novel anti-CRISPR proteins that can inhibit in CRISPR-Cas proteins. Dr, Sutharsan believes, “This will improve the efficiency of CRISPR technology which will be highly useful for gene editing technologies, alleviating a wide range of genetic disorders and diseases in the future”.