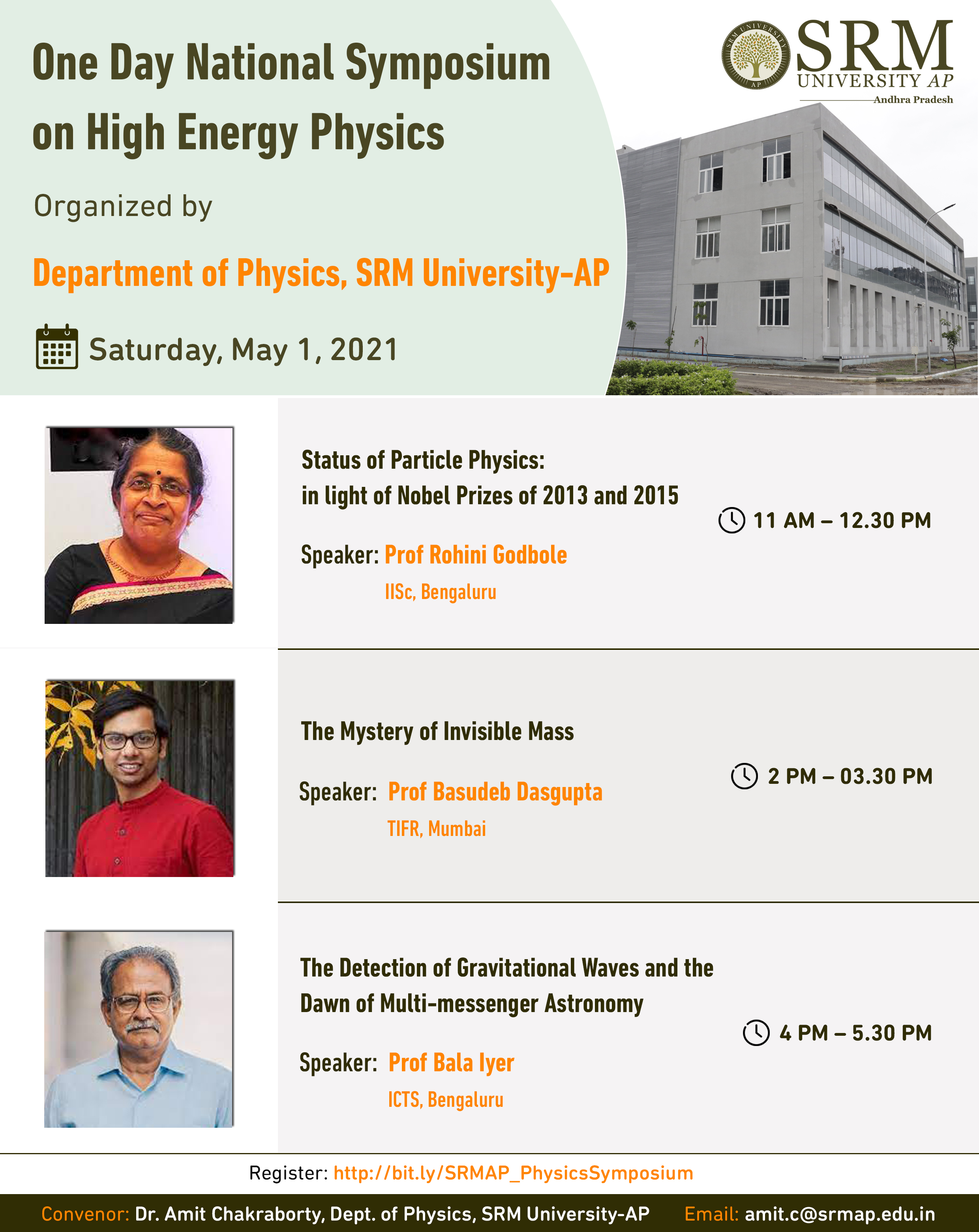 The Department of Physics, SRM University-AP organized a “One-day National Symposium on High Energy Physics” on Saturday, May 1, 2021. The session was held through online mode in the presence of honourable leaders of the university, faculty members, and attendees from various fields of interest. Prof V S Rao, the Vice-Chancellor, SRM University-AP, welcomed the gathering with a brief overview of the university’s inception and quick progress in the field of research.

Three talks at the pedagogical level were organised for a wider audience, especially for the students of basic sciences and engineering streams. The first speaker, a Padma Shri awardee, Prof Rohini Godbole, who is a theoretical particle physicist at Indian Institute of Science (IISc), Bengaluru expounded on “Status of Particle Physics: in light of Nobel Prizes of 2013 and 2015”. She talked about the Higgs Boson’s theoretical postulate, for which the Nobel Prize in Physics was granted in 2013. According to studies, it was the final missing element in the Standard Model’s periodic table (SM). Her paper incorporated the experimental finding of the Neutrino Oscillation, as well as many compelling pieces of evidence that led to the 2015 Nobel Prize.

In the afternoon session, the talks were on the burgeoning field of Dark Matter physics and Gravitational-wave astronomy. Prof Basudeb Dasgupta from Tata Institute of Fundamental Research (TIFR), Mumbai apprised the participants on “The Mystery of Invisible Mass”. The deep understanding and expertise of Prof Dasgupta in the interfaces of particle physics, astrophysics, and cosmology with a particular emphasis on dark matter and neutrino physics as a theoretical physicist at the Tata Institue of Fundamental Research (TIFR) enlightened the audience. He stated that the human beings are able to see only 20% of the universe’s celestial objects; the remaining 80% are unseen and are referred to as “dark matter.” In his words, “Billions of years after the Big Bang, all we can see is the cloud’s surface, where the light is scattered.” Prof Basudeb, is a frequent speaker at prestigious international and national conferences and is a youth icon for aspiring physicists and scientists.

The final lecture of the day was delivered by Prof Bala Iyer from International Centre for Theoretical Sciences (ICTS), Bengaluru on “The Detection of Gravitational Waves and the Dawn of Multi-messenger Astronomy” at 4.00 pm. Prof Iyer is currently the Simons Visiting Professor at ICTS-TIFR Bangalore and co-PI of the LIGO-India Scientific Collaboration. He coaches and guides young minds interested in astrophysics, cosmology, and fundamental physics. Prof Iyer did a presentation on the discovery of gravitational waves from a binary black hole in 2015, which was a watershed moment and necessitated the launch of a new multi-messenger astronomy with the potential to have a significant impact on astrophysics. “Any relativistic theory of gravity must be consistent with the special relativity principle. Gravity’s effect cannot travel faster than the speed of light. If an item’s gravitational field changes, the changes propagate over space and take a certain amount of time to reach the object “, he added.

The symposium that aimed to discuss the current status of exciting research topics of High Energy Physics concluded with a Q&A session. This has proved that the faculty members and participants were highly inspired and motivated after attending the symposium and listening to the scholars.