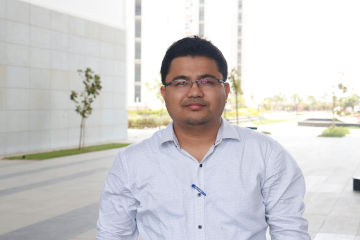 The slow kinetics of N2 adsorption, splitting of the strong N≡N bond are the challenges for the electrocatalytic nitrogen reduction reaction (NRR) process. In the electrocatalytic NRR process, the fast reaction kinetics of hydrogen evolution reaction is the greatest obstacle. To solve these challenges, the search for various types of catalysts is on a roll. Also, identifying active sites responsible for the origin of catalytic activity in transition metal phthalocyanine is difficult due to its complex structure. Herein, density functional theory (DFT) has been applied to identify the probable active sites of nickel phthalocyanine (NiPc) in NRR as well as the origin of catalytic activity, which is associated with d band centre and density of states (DOS) of Ni in NiPc. Accordingly, the NiPc nanorods (NRs) were synthesised by the solvothermal method on a large scale and the chemically prepared NiPc NRs exhibit the NH3 yield rate of about 85 μg h-1mgcat-1. 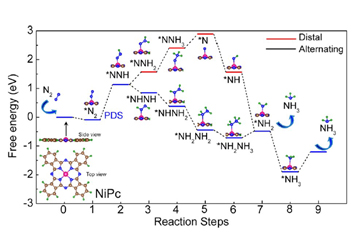 In 2019, the global production capacity of ammonia was 235 million metric tons which will increase to 290 million metric tons by 2030. This emphasis on ammonia is due to its application in broad and diverse fields, such as fertilisers, textiles, pharmaceutical, and carbon-free energy carriers. The Haber-Bosch process is used to synthesise ammonia (NH3) from N2 and H2 using Fe based catalyst. However, the process emits carbon dioxide (CO2) (1.5 tons of CO2/tons of NH3 production) and requires high pressure and temperature and consumes around 2% of the global energy supply. Electrocatalytic N2 fixation (N2 + 6H+ + 6e− → 2NH3) showed great potential due to the possible use of atmospheric nitrogen and hydrogen derived from water through electrolysis and in mild conditions.

In their future endeavours, Prof Thapa and his research group will design different types of such single-atom catalyst (SAC) considering different metal atoms and their surrounding non-metals. Dr Thapa’s team necessitates addressing the above problem to fill the gap, which could be the energy equation, energy parameter and electronic descriptor, to help them predict the best SAC catalyst in the large catalyst space for eNRR over HER. The solution is much needed through density functional theory to understand the origin and design principle and lower the time for trials by experimentalists in the laboratory. Prof Thapa is working on energy equations that can predict the best catalyst for eNRR over HER. They defined four regions to find the SAC catalyst for eNRR over HER (1) catalyst for NRR with almost nil HER probability (ii) catalyst for NRR with low HER probability (iii) HER over NRR and (iv) NRR is possible but with H poisoning. Overall, the energy parameter and descriptor to find NRR over HER is a fundamental problem, and the database is a platform to be used by experimentalists and is the key idea.