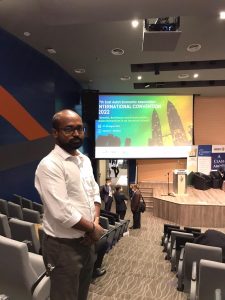 Dr Vineesh presented the paper titled Does Business Group Affiliation Enhance Firm-Level Profitability? Evidence from Indian Automotive Component Industry, that addresses the growing competitive and volatile nature of economic sphere by testing the persistence of profit in a highly evolving emerging country environment such as India.

Emerging economies, such as India, confront different challenges than developed economies. The country has witnessed diverse regulatory environments, varying from highly regulated to more liberal ones. The more liberal environment coupled with the entry of overseas players into this realm has a definite impact on the existing industrial structure, thereby creating a volatile, ever evolving competitive environment.

The paper aims to address this issue and seeks to validate the part played by RBV in generating inimitable capabilities in a context-specific setting of a particular industry, i.e., the Indian automotive component industry. It also analyses the part played by business group affiliation in the post-reform era and its influence on profitability.

Social implications of the research

The results, as reported in this paper, have some important implications for different stakeholders like managers, regulators, policymakers, etc. The finding that past R&D intensity has a positive influence on current profitability is significant to managers so they can allocate appropriate resources to fund such projects without many apprehensions.

The finding of a positive influence of exports on profitability indicates that managers could further explore the external markets to boost up profitability as export markets are reportedly far more rewarding.

The discovery of moderate to high profit persistence has an important implication for regulators in order to facilitate healthier competition among firms. The moderate to high profitability persistence implies that the regulators have not managed to instill a reasonable level of competition in the industry through carefully crafted interventions, thereby facilitating its growth.