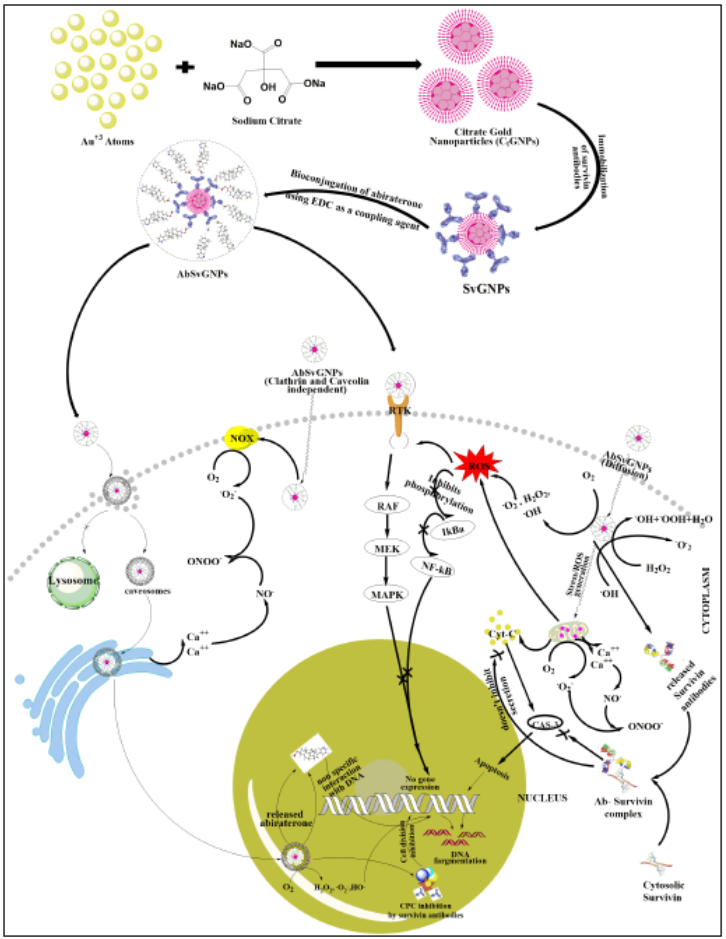 Prostate cancer is the second most frequent solid organ malignancy in males worldwide. The risk of causing prostate cancer is increased by age, race, and family history. The U.S. FDA has approved the six most successful drugs, viz., docetaxel, sipuleucel-T, abiraterone, enzalutamide, cabazitaxel, and radium-223. Despite these approved therapies, the disease state remains lethal. The recent publication of Dr Imran Uddin, Post Doctoral Fellow, Department of Physics,  “Targeted non-AR mediated smart delivery of abiraterone to the prostate cancer” proposes a combinatorial system against prostate cancer using the FDA-approved drug abiraterone. The paper was published in the Q1journal PLoS ONE having an Impact Factor of 3.75. The research was done in collaboration with Dr Mohd Sajid Khan, Associate Professor, Aligarh Muslim University.

Although abiraterone is an excellent anticancer agent, it causes several side effects and becomes irresponsive after a few months of therapy. They developed a nanomedicine, along with two other components, that will deliver a substantially small dose of abiraterone for treating the same stage of cancer, and the drug will also not be resistant to the cancer cells. The delivery system delivered the drug at a specific site and modified its mode of action. The low dose of abiraterone will also not cause any substantial side effects. The combo was found to be highly biocompatible, nontoxic, and effective.

The proposed nanomedicine with established drug abiraterone, gold nanoparticles, and antibodies against cancer-promoting protein synergistically acted on prostate cancer cells. This synergism potentiated the effect of abiraterone at a very low concentration because other entities also acted via different routes and weakened the cancer cells. The low dose minimized the side effects and maintained patient compliance. This drug was delivered directly to the target, which enabled it to adopt different methods to act on cancer cells. Therefore, the results were promising but further needed to be validated in pre-clinical and clinical studies.

In future, Dr Uddin intends to focus on interdisciplinary sciences. His plans include studying the interface of biology with inorganic nanomaterials, understanding the underlying biological process, and developing new industrially relevant nanomaterials and biomedical aspects. It involves developing nano biosensors for biomolecule detection through the effective integration of the best approaches and expertise in sensor engineering with the vision to take a lead in shaping the future of biomedical monitoring systems. The timely integration of such interdisciplinary approaches will consolidate the application of Lab-on-a-Chip devices for automated biomolecular monitoring.

Prostate cancer is the second-deadliest tumour in men all over the world. Different types of drugs with various delivery systems and pathways were developed, but no one showed prominent results against cancer. Meanwhile, nanotechnology has shown good results against cancer. Therefore, in the given study, citrate mediated synthesized gold nanoparticles (CtGNPs) with immobilized survivin antibodies (SvGNPs) were bioconjugated to the substantially potent drug abiraterone (AbSvGNPs) to develop as a combinatorial therapeutic against prostate cancer. The selected drug abiraterone possesses exceptionally good activity against prostate cancer, but cancer cells develop resistance against this drug and it also poses several severe side effects. Meanwhile, survivin antibodies were used to deliver AbSvGNPs specifically into cancer cells by considering survivin, an anti-apoptotic overexpressed protein in cancer cells, as a marker. The surviving antibodies have also been used to inhibit cancer cells as an immunotherapeutic agent. Similarly, CtGNPs were discovered to inhibit cancer cell proliferation via several transduction pathways. The given bioconjugated nanoparticles (AbSvGNPs) were found to be substantially effective against prostate cancer cells.