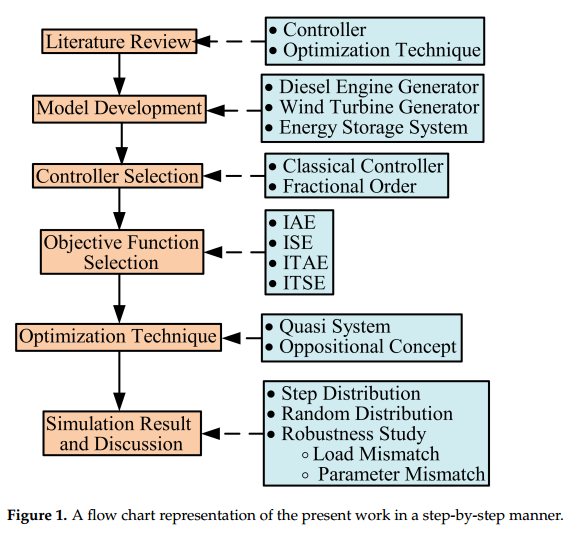 An innovative union of fuzzy controller and proportional-integral-derivative (PID) controller under the environment of fractional order (FO) calculus is described in the present study for an isolated hybrid power system (IHPS) in the context of load frequency control. The proposed controller is designated as FO-fuzzy PID (FO-F-PID) controller. The undertaken model of IHPS presented here involves different independent power-producing units, a wind energy-based generator, a diesel engine-based generator and a device for energy storage (such as a superconducting magnetic energy storage system). The selection of the system and controller gains was achieved through a unique quasi-oppositional harmony search (QOHS) algorithm. The QOHS algorithm is based on the basic harmony search (HS) algorithm, in which the combined concept of quasi-opposition initialization and HS algorithm fastens the profile of convergence for the algorithm. The competency and potency of the intended FO-F-PID controller were verified by comparing its performance with three different controllers (integer-order (IO)-fuzzy-PID (IO-F-PID) controller, FO-PID and IO-PID controller) in terms of deviation in frequency and power under distinct perturbations in load demand conditions. The obtained simulation results validate the cutting-edge functioning of the projected FO-F-PID controller over the IO-F-PID, FO-PID and IO-PID controllers under non-linear and linear functioning conditions. In addition, the intended FO-F-PID controller, considered a hybrid model, proved to be more robust against the mismatches in loading and the non-linearity in the form of rate constraint under the deviation in frequency and power front.

The research group believes that the study will boost the use of renewable energy utilization for fulfilling energy requirements in a more reliable and stable manner. In future, they plan to use the knowledge gained from the isolated systems to develop a Multi-Migrigrid system.