Koushik Bhargav Muthe, CSE and his team from Next Tech Lab – Saptarshi Mazumder, CSE, Rajarshi Mazumder, CSE, Agniswar Paul, ECE, Souradeep Das, SRM KTR, CSE, participated in the Developer Week Hackathon (one of the world’s largest challenge driven hackathons) and won the top prize with an award of $1,000 from Agoraio. The team developed a Blockchain based game that incentivises people to buy products and was selected as the best hack by the Agoraio panel.  “We built an Ethereum based card trading game for shoppers that helps sellers win over more customers. We did this by incorporating the Agoraio’s chatting platform into our game.” says Koushik Bhargav.

AND ANOTHER ONE! THE BEST BLOCKCHAIN UTILITY HACK 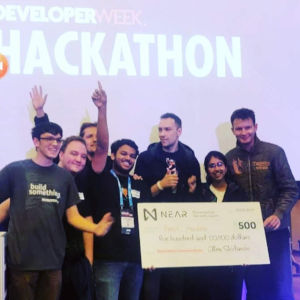 Miran, Niladri, and Sejal of Next Tech Lab from KTR – A Facebook developer and an entrepreneur, were among the top 5 teams at the Hackathon with 150+ teams and took the first prize for the “Best Blockchain Utility Hack” with a bounty of $500 from Near Protocol. The product will be shown in all developer week magazines. The team made a blockchain based contract system for making corporate or social contracts whereby both parties receive an email to accept or reject. Once both parties accept, an entry on the blockchain is made and the contract can be recovered anytime.

Koushik Bhargav CSE SRM AP and head of Satoshi lab at Next Tech lab, Sauradeep Das, CSE SRM KTR and Agniswar Paul, CSE SRM AP (all three presently in UC Berkeley for the 2019 semester abroad program) taking in the technological wonders at ETH Denver, Colorado, the world’s biggest Ethereum hackathon and conference, Feb.14-17.  “It was one the best conferences I have attended, got to meet amazing people working on Blockchain technology from all over the world,” says Koushik.  It was great because Satoshi lab focuses completely on Blockchain technology.”  Koushik and his colleagues including Miran Junaidi shared ideas with developers, Blockchain startups, mentors and developing hacks. “Many more amazing events lined up for our semester in University of California, Berkeley.”