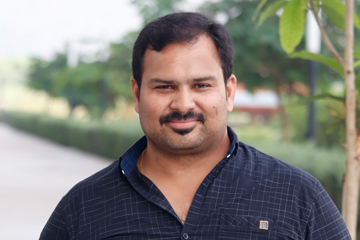 Dr Sutharsan Govindarajan, Assistant Professor of Biological Sciences at SRM University-AP has published two papers in highly reputed journals, “Nature” and “Nature Microbiology”. Both papers involve the discovery of novel strategies used by bacteriophages (viruses that kill bacteria) to overcome the bacterial CRISPR-Cas system, which are molecular scissors that are programmed to cut DNA. His findings have massive implications on the society as it has the ability to reshape the boundaries of the Phage-therapy in curing diseases.

In the paper, “A bacteriophage nucleus-like compartment shields DNA from CRISPR nucleases”, published in ‘Nature’, researchers from the University of California San Francisco, including Dr Sutharsan of SRM University-AP, discovered that certain large bacteriophages called “Jumbophages” are capable of protecting their genetic material (DNA) from being cut by the bacterial CRISPR-Cas system. In nature, the primary function of the CRISPR-Cas system, which is famous for its genome editing applications, is to cut the DNA of bacteriophages. The researchers made a surprising finding that several CRISPR-Cas enzymes were utterly ineffective in cutting the DNA of jumbophages. Subsequent studies led to the finding that these bacteriophages protect their DNA within a protein compartment called as ‘shell’. The shell provides a ‘safe room’ for the phage DNA and keeps antiviral enzymes, including CRISPR-Cas enzymes at bay. It is the first-time researchers have found that bacteriophages, which are essentially viruses, can employ one strategy to protect its DNA from many different immune systems. Dr Sutharsan says, “usually, this kind of sophisticated DNA protection mechanism is employed by complex eukaryotic cells like humans. However, our findings show that viruses, which have evolved billions of years before eukaryotic cells, also seem to be using a similar strategy. This is mind-boggling”, says Dr Sutharsan, “because our finding is making us to rethink about the current understanding of the evolution of cells on Earth.”

In another finding, which is also co-authored by Dr Sutharsan, the researchers have found a different kind of bacteriophage that protects its DNA by ‘turning off’ the production of the CRISPR-Cas enzymes in bacteria. Thus, this bacteriophage employs an entirely different strategy for the same purpose, i.e., protection of its genetic material. The paper “Bacterial alginate regulators and phage homologs repress CRISPR–Cas immunity”, got published in the journal ‘Nature Microbiology’ very recently.

Dr Sutharsan further explained how his research can play a pivotal role in the application of Phage-Therapy, which is a therapeutic strategy where bacteriophages are used to kill antibiotic-resistant bacteria and cure patients suffering from difficult-to-treat bacterial infections. Currently, the success rate of phage therapy is low, and researchers are trying to find the reasons behind this. Dr Sutharsan thinks that CRISPR-resistant bacteriophages, which he studies in his lab, can be a game-changer in phage therapy. However, this idea needs to be tested. Towards this goal, he is currently seeking collaborations with clinicians interested in phage therapy.

When asked about his future research plans, Dr Sutharsan says the “Laboratory of phage-bacteria interaction”, which I am going to establish soon at SRM University – AP, will involve in the discovery of new molecular mechanisms employed by phages and bacteria to defend against each other. Such studies have given us’ Restriction enzymes’, which started the ‘era of gene engineering’, and ‘CRISPR-Cas enzymes’, which started the ‘era of genome engineering’. We hope that our lab at the SRM University – AP will make discoveries that can take us beyond genome engineering.