Dr Karthik Rajendran, Assistant Professor from the Department of Environmental Science, has added another paper to his list of publications. His paper titled Towards green whiskey production: anaerobic digestion of distillery by-products and the effects of pretreatment has been published in the Journal of Cleaner Production (Q1 category) with an impact factor of 9.2.

Abstract of the research 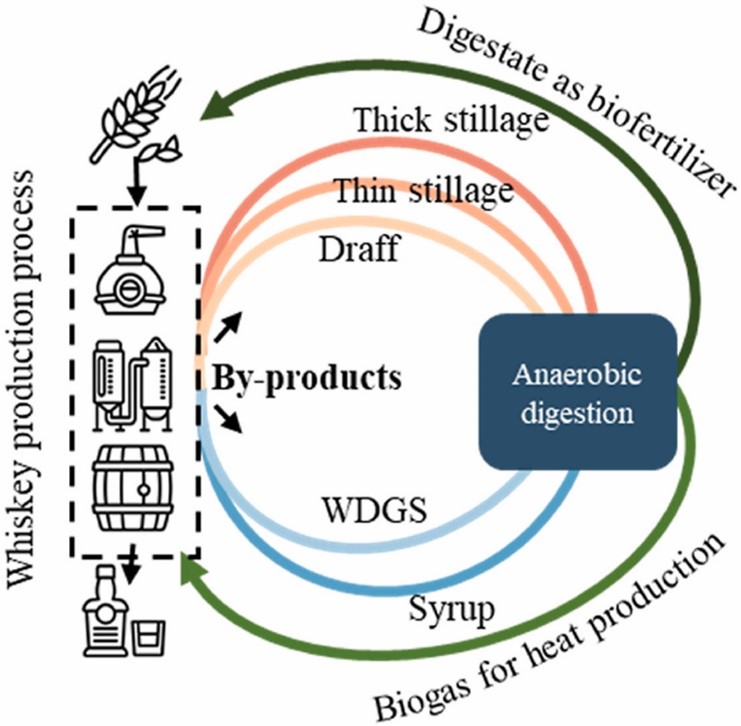 Using renewable biogas from anaerobic digestion of distillery by-products as a low carbon heat source can decarbonise the distillery process and support the distillery industry for a transition to a more sustainable production process. The study investigated the anaerobic digestion performance of different types of whiskey by-products and the effects of acid pre-treatment on the digestion of solid by-products. Results of biomethane potential assays showed that the methane yield from the unprocessed by-products was 330 mL/g volatile solids (VS) from draff, 495 mL/g VS from thin stillage, and 503 mL/g VS from thick stillage. For the processed by-products, the specific methane yield was 370 mL/g VS from cake maize, 382 mL/g VS from wet distillers’ grains with solubles (WDGS), and 545 mL/g VS from syrup. Acid pre-treatment (1% H2SO4 at 135 ◦C for 15 min) did not significantly improve the methane yield from solid by-products (such as draff and WDGS) but reduced the digestion time by 54.5% for cake maize. The microbial community analysis revealed that methane production from the untreated and acid-pre-treated solid by-products (draff and WDGS) was mainly through the hydrogenotrophic methanogenesis pathway. The gross thermal energy in the form of methane produced from 100 tonnes of mixed unprocessed by-products (draff, thin stillage, and thick stillage) was calculated as 24.4 MWthh equivalents to 60.6% of the thermal energy consumed in whiskey production, which affected the same percentage of CO2 emissions reduction.

Explanation of the research

Many industries meet their energy demand based on the fossil fuels such as coal, oil, and natural gas, which increases carbon dioxide emissions. Alcohol production is one of the heavy fossil fuel using industries, especially in distillation. The waste after alcohol production can be used to produce methane, which can be used as energy in distillation, reducing the need for energy consumption. By consuming the waste and producing energy, up to 60% of thermal energy could be reduced. This also reduces the CO2 emission by 60%. Alcohol industries can use their waste to decarbonise the energy demand, thus meeting the net-zero. India is expected to reach net-zero by 2070, which will be a bigger addition as a part of it.

In this research, Dr Karthik Rajendran has collaborated with Professor Jerry Murphy, UCC, Ireland, and Dr Richen Lin, UCC, Ireland. Applying the similar concept in the Indian context is his future plan for this research.