“Ideas are worthless until you get them out of your head to see what they can do!”

The event commenced with the first cohort of the Startup Semester hosted by UCB sharing their experiences of their semester abroad, followed by the members of the lab presenting ‘elevator’ pitches of their start-up ideas. Elevator pitches refer to the most concise representation of an idea and they serve as amazing conversation starters.

“Such events should happen more often on campus! It’s a great networking opportunity, indeed”, said Shubham Rao from the SEAS. Several ongoing campus projects were revealed. Saurabh Ghanekar from SEAS presented the idea that led them to win the Indian Game Development Challenge (IGDC) organised on the campus of SRM Amaravati. Agniswar Paul, a member of the Next Tech Lab spoke about his amazing project called the PlantCoin which focuses on an efficient plant watering system based on block chain technology.

“Ennovab is the closest we can get to the Silicon Valley on the campus of SRM AP. And honestly, I love being a part of it, ” shares Sourav Sanyal, a student of SLABS and a member of Ennovab.

The lab has several events lined up to keep the entrepreneurial spirit of the students up. 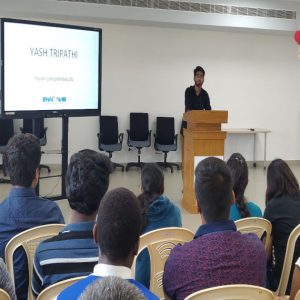 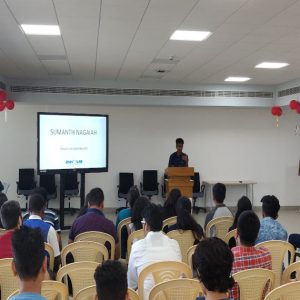