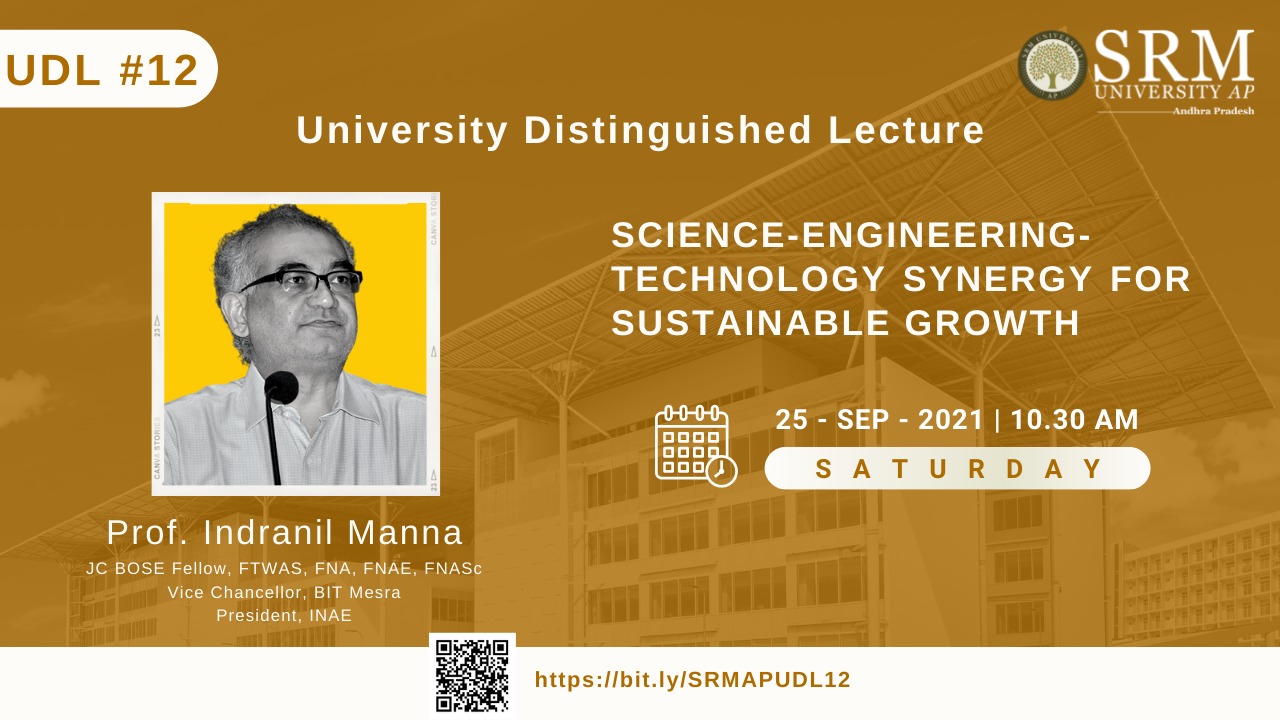 SRM University-AP, Andhra Pradesh is organising the twelfth edition of the University Distinguished Lecture Series on September 25, 2021, at 10.30 am. Professor Indranil Manna, eminent scholar and JC Bose fellow, will deliver the distinguished lecture on the topic “Science-Engineering-Technology Synergy for Sustainable Growth”.

Sustainable development will necessitate new engineering and technology-based solutions to address the challenges of climate change, population increase, and urbanisation. Engineering infrastructure and competence-building initiatives are essential to assure that an adequate number of engineers are capable and ready to work on these global challenges. Developing a contingent of engineering creativity calls for a generation of future engineers who are committed to sustainable innovation.

About the Speaker:
Professor Manna, a JC Bose fellow of DST, is currently the Vice-Chancellor of BIT Mesra. He obtained his B. Engg. Degree from Calcutta University (BE College) in 1983, M. Tech. from IIT Kanpur in 1984 and PhD from IIT Kharagpur in 1990. He was a Premchand Roychand Scholar (1992) and a Mouat Medal awardee (1999) of Calcutta University. He is an educationist and materials engineer with wide-ranging research interests covering phase transformation, structure-property correlation and modelling in nanometric metals and ceramics, laser/plasma assisted surface engineering, nano/ferrofluid and bainitic steel. His studies on amorphous Al-alloys, laser surface engineering of steel/Mg/Al alloys, boundary diffusion-controlled phase transformations, and thermal/magnetic properties of nano/ferrofluid are highly cited. He teaches subjects related to physical metallurgy and surface engineering. As a guest scientist, he visited different renowned Institutions and Universities abroad like Max Planck Institute at Stuttgart, Technical University of Clausthal, Liverpool University, Nanyang Technological University, NIMS, Unipress and the University of Ulm. His research exploits have been published in over 275 peer-reviewed publications; he has guided 30 doctoral theses and conducted 35 sponsored projects worth over Rs 25 crore as the PI. He is a Fellow of all the national academies of science (INSA, IASc, NASI) and engineering (INAE) in India. He was honoured as a distinguished alumnus by IIEST Shibpur and IIT Kharagpur. He is a recipient of The World Academy of Sciences (TWAS) prize for engineering sciences (2014) and was elected a Fellow of TWAS (2015). He is also a Member of the Asia Pacific Academy of Materials. He received the MRSI Medal in 2000, Binani Gold Medal (1999) and G D Birla Gold Medal (2008) of IIM, AICTE Career Award for Young Teachers (1995), and INSA Medal for Young Scientist (1992). He was felicitated by the Ministry of Steel with the Young Metallurgist (1991), Metallurgist of the Year (2002) and National Metallurgist Award (2018). He was the National Coordinator of IMPacting Research Innovation and Technology (IMPRINT), a unique technology development initiative of MHRD during 2015-20. He is a member of the Research Boards of several industry/R&D like RINL, GAIL, BHEL, ARCI, Min of Steel and serves in several national-level committees of DST, CSIR, SERB, INSA, etc. Earlier, he served as an expert in NAAC and NBA. He is a former President of the Indian Institute of Metals and Vice President of the Indian National Academy of Engineering (INAE). The University of Kalyani and Kazi Nazrul University have conferred DSc (hc) on him in 2017. He served as the Director of CSIR-CGCRI in Kolkata during 2010-2012 and of IIT Kanpur during 2012-2017. Professor Manna is now the 14th President of INAE since Jan 1, 2021, for the next 2 years.

Every month, the University Distinguished Lecture (UDL) hosted by SRM University-AP is being attended by about 2000 members from IITs, NITs, IISERs, Universities/institutions, CSIR, DST, DBT, DRDO, DAE, ISRO, NARL, MoES and several others from different parts of the country.

All are cordially invited to the latest UDL-12 session that will address the vital knowledge gap for sustainable growth on September 25, 2021, at 10.30 am.