Some Fascinating Features of Water Wave Propagation and Dissipation: A Mathematical Viewpoint

The Department of Mathematics is going to host the fourth instalment of the Distinguished Lecture on February 2, 2022, at 3:30 PM with Prof Swaroop Nandan Bora from the Indian Institute of Technology Guwahati as the keynote speaker. Dr Bora will be speaking on “Some Fascinating Features of Water Wave Propagation and Dissipation: A Mathematical Viewpoint”.

Prof Swaroop Nandan Bora received his PhD in Mathematics from Dalhousie University in Halifax, Canada. He joined the Department of Mathematics, Indian Institute of Technology Guwahati in 1999. He is also the youngest son of the renowned novelist and Padma Shri recipient Lakshmi Nandan Bora.

Some Fascinating Features of Water Wave Propagation and Dissipation: A Mathematical Viewpoint:

Long since oceans have been serving mankind in various ways and of course, at the same time, the waves have also shown their fury at times by claiming lives and creating huge destruction. In order to understand the oceans and the strength they display through waves, it becomes very pertinent to study ocean waves, their behaviour and effects with respect to wave propagation, scattering, damping, trapping etc., which influence a number of issues in connection with marine structures and coastal regions. The comfortable situation to work with ocean waves is by considering simple conditions thereby neglecting many important aspects such as the porosity of the structures that are installed in the ocean for various activities, the porous and elastic effects of the sea-bed and also the unevenness of the sea-bed. However, the real situation demands that some or all of these be taken into account while modelling a problem so that the problem is formulated for a more realistic scenario.

In order to reduce the wave impact on marine structures (i.e., to dissipate the wave effects), it is essential that the structures (such as cylinders, barriers, caissons) possess in them the ability to reflect the wave and help in attenuating the wave energy. This brings into fore the utility of porous structures which can be used as breakwaters in the coastal and offshore regions for various applications. Further, it is practically impossible to find sea-beds that are flat and do not possess any porosity or elasticity. In other words, a more realistic formulation can be carried out by considering structures possessing porosity, and sea-beds being uneven and possessing porosity and/or elasticity.

The objective of this talk is to discuss the scattering of water waves by various types of porous structures placed on flat or uneven sea-bed which may possess porosity and/or elasticity. The study focuses on how reflection varies when different important parameters are changed. The observations made from this study will allow one to design structures that will be effective enough to reduce wave impact on the structures. In this talk, some results will be displayed which portray the physical scenario. An attempt will be made to present some practical problems which take into account a number of important properties and parameters so that the results become practical to be followed by relevant people for various activities with regard to protecting certain regions and structures from harsh ocean wave action. It will mainly emphasize the significant role that porosity and elasticity play with regard to ocean wave propagation and various related issues. The emphasis will be on the modelling of the problems which will establish the essence of mathematics.

A brief and friendly introduction to water wave propagation will precede the main components of the talk to give some general idea to the audience.

Sculpt Your Own Future with Professor Sivakumar Narayanswamy 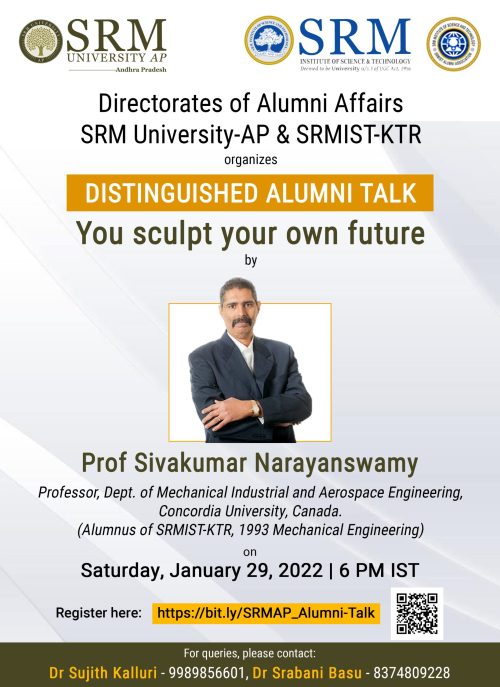 We can never predict what our lives and careers hold. But we are each dealt with our own share of materials to work with and then entrusted with tools that we learn to use.

Every student of SRM University-AP is a gem that is chosen after careful testing and consideration. This University makes every tool available to the young and energetic minds to test their skills. However, it is not the tools in hands that make an artist but how the tools are used.

We encourage our students to quest with unquenchable curiosity, to think proactively and to design innovatively. To the right aspirations and ambitious efforts, the sky is the limit.

To this end, we bring to you our Distinguished Alumni, in association with SRMIST-KTR, Dr Sivakumar Narayanswamy, Professor at the Department of Mechanical Engineering, Concordia University, Montreal, Canada. 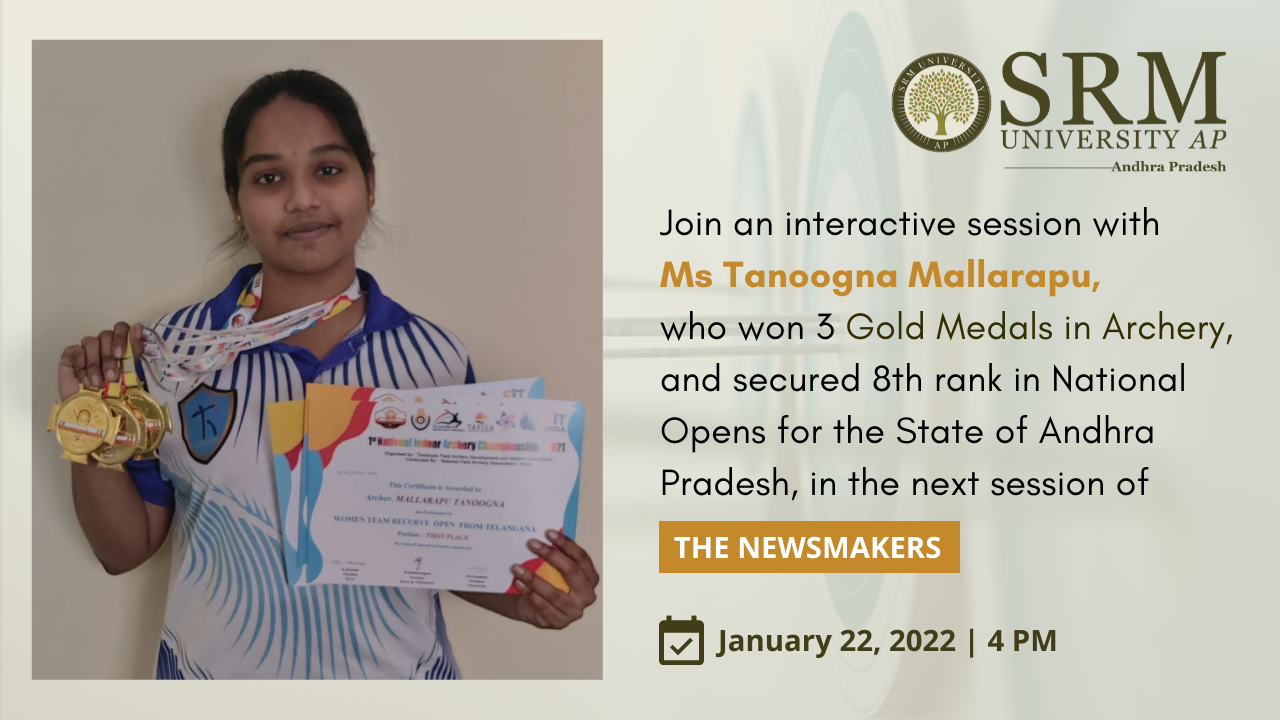 Ms Tanoogna has been training to participate in indoor and outdoor archery championships for a year. She won gold medals in the Senior Recurve women individual, women team and mixed team categories and is ranked 8th in the national archery rankings.

All are encouraged to join the session and get inspired by the champion! 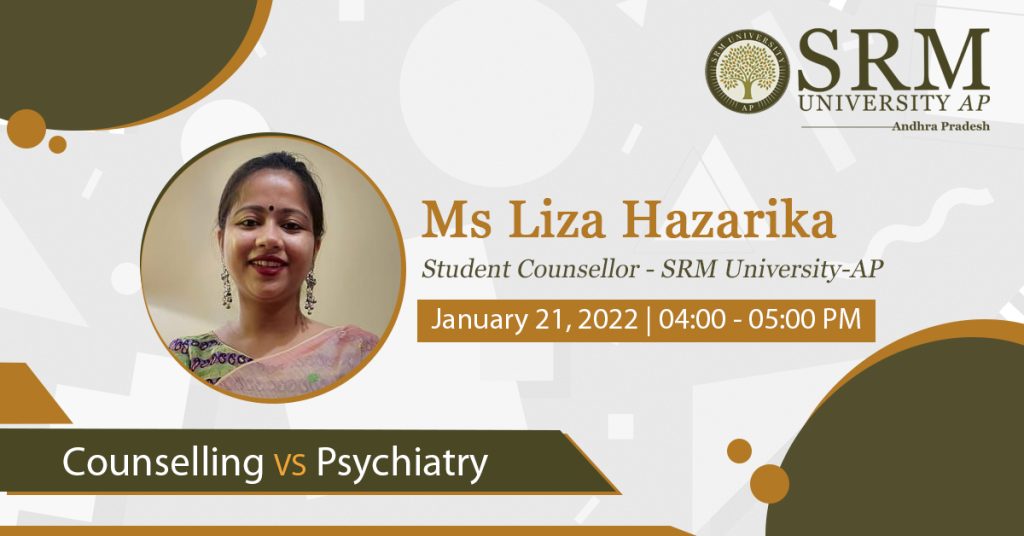 The Department of Student Affairs organises a session with Ms Liza Hazarika, Student Counsellor, SRM University-AP, on the difference between “Counselling VS Psychiatry” on January 21, 2022, at 04.00 pm.

People often use the terms “Psychiatrist” and “Counselling” interchangeably. It is a common confusion among people who are not related to the field of psychiatry or psychology. There are differences between the two professions when it comes to their education, training, and scope of practice. In today’s era, when people are more than often suffering from emotional or mental problems and hesitate to visit a professional, it is important to know the difference. We often forget that keeping our minds healthy is equally important as keeping our bodies healthy. Youngsters often go through many emotional and psychological problems without being able to share those with anyone. The session Counselling Vs Psychiatry will help you understand the role of a Counsellor in your well-being.

Ms Liza Hazarika was associated as a psychologist with Forward Seamen’s Union of India and with Pratishruti Cancer and Palliative Trust as a volunteer and psychologist. Ms Hazarika is a certified Spiritual therapist from Amrit Asmi Institute. She believes in a holistic approach to treatment. She is the founder of Call For Healing, a space for spiritual practices. Ms Hazarika is also actively involved in several Non-Governmental Organisations working in areas of mental health. She has done her Master’s in Clinical psychology and Bachelor’s in Psychology from Handique Girl’s College, Guwahati.

On the importance of self-love and self-acceptance 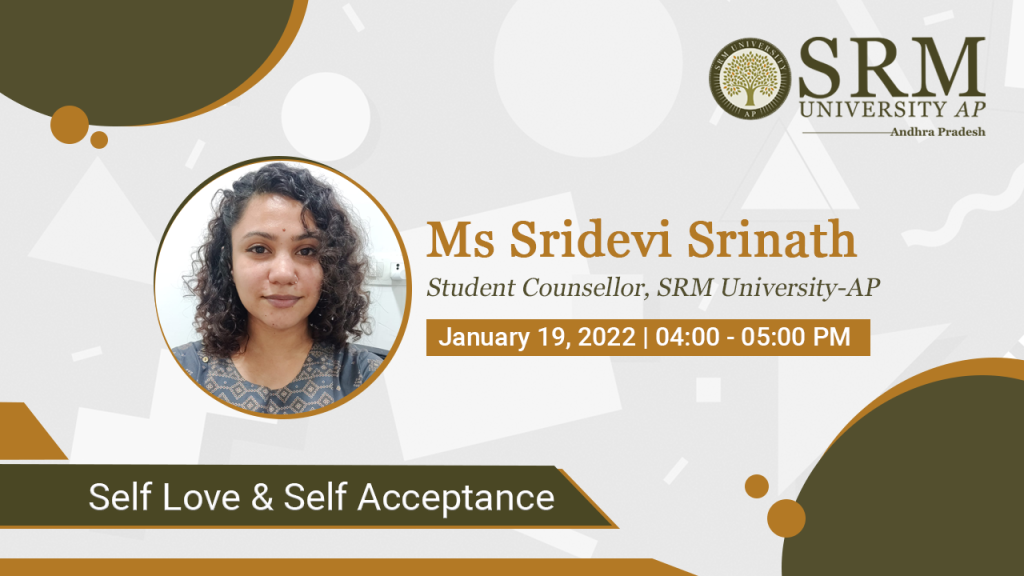 Self-acceptance and self-love are essential aspects of quality health and happiness. The Department of Student Affairs at SRM University-AP organises an interactive session with Student Counsellor Ms Sridevi Srinath to inculcate in students the importance of valuing and respecting oneself, embracing both the positive and negative facets. The session titled “Self-Love & Self-Acceptance” will be held on January 19, 2022, at 4.00 pm through online mode.

Setting our standards and metrics directly impacts our physical, mental, and emotional well-being. We shut ourselves off from the energy that keeps us alive when we refuse to accept ourselves. Those who don’t love and accept themselves get disconnected from life, falling prey to significant health consequences. The happier you are, the more you appreciate yourself.

You’ll only be happy to the extent that you believe you’re deserving of it. Therefore, brace yourself for this enlightening session on January 12, 2022, at 4.00 pm. 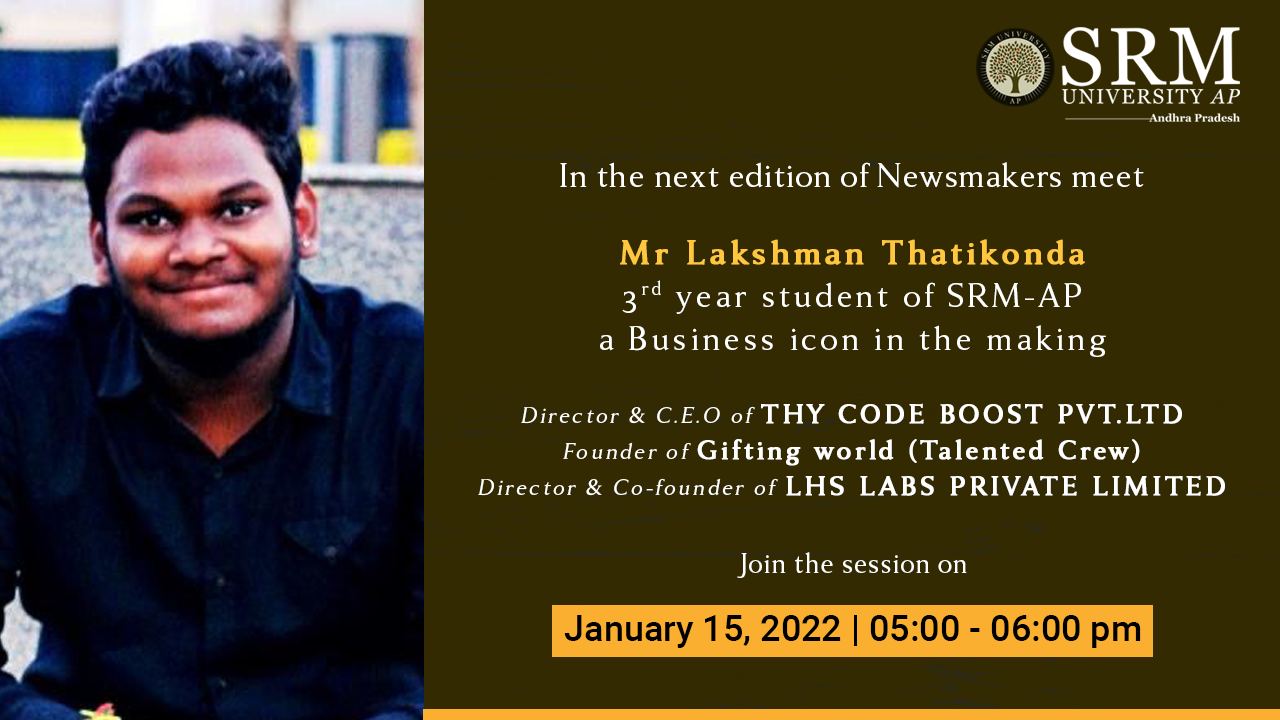 Mr Lakshman Thatikonda, a 3rd year BBA student of the SRM University-AP, has started his own business venture (TalentCrew), which was incubated at the Hatchlab Research Centre (The technology and livelihood business incubator of SRM University-AP).

His turnover has crossed 1Cr + (INR) with an employee base of 12 differently-abled individuals. In fact, the vision of Lakshman is very different and so is his business model. Tune in for this exciting session with him to learn about his success story and his vision. 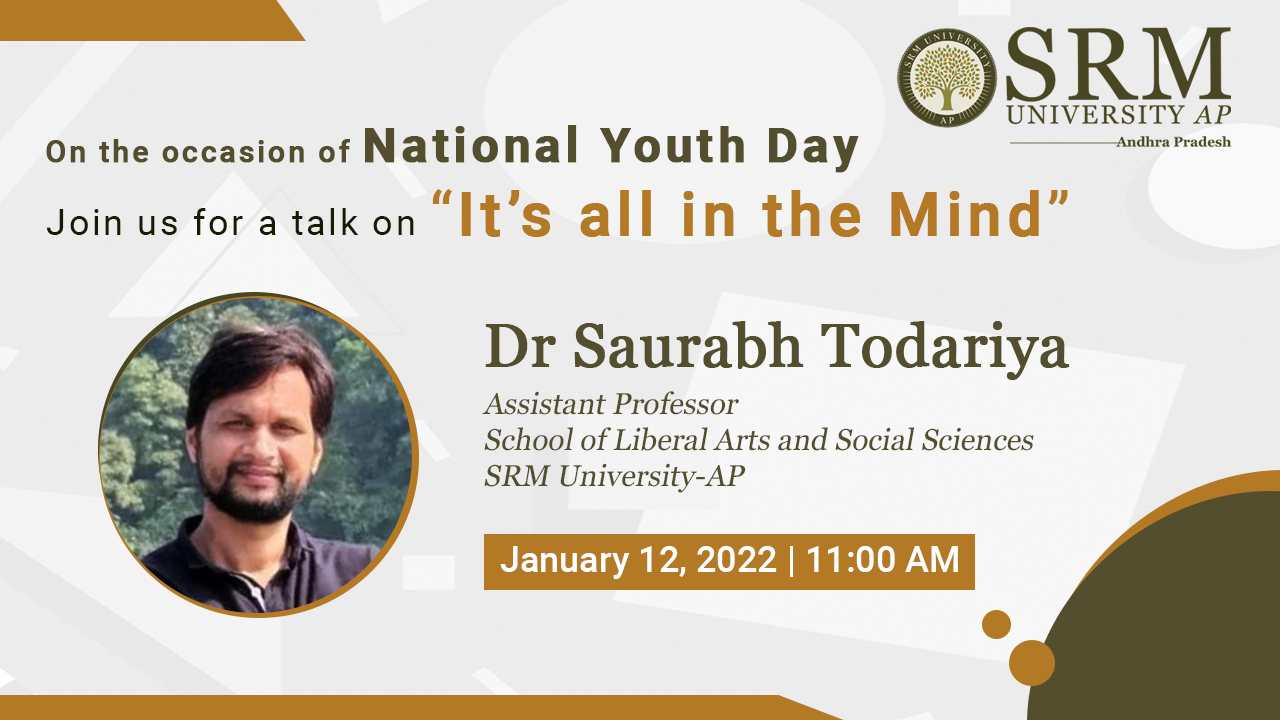 The assertion of man’s divinity is at the heart of Vedanta. On the occasion of National Youth Day, a talk is being organised by the Department of Student Affairs at SRM University-AP. Dr Saurabh Todariya, Assistant Professor, School of Liberal Arts and Social Sciences will highlight the aspects of practical Vedanta and its relevance for the contemporary world on January 12, 2022, at 11.00 am.

The Vedanta instructs human beings to believe in themselves in order to attain divinity. Its core message, in Swami Vivekananda’s words, is that “every soul has the potential to be divine.” The goal is to regulate both outward and interior nature in order to manifest this divinity within.

All are invited to join this insightful session. 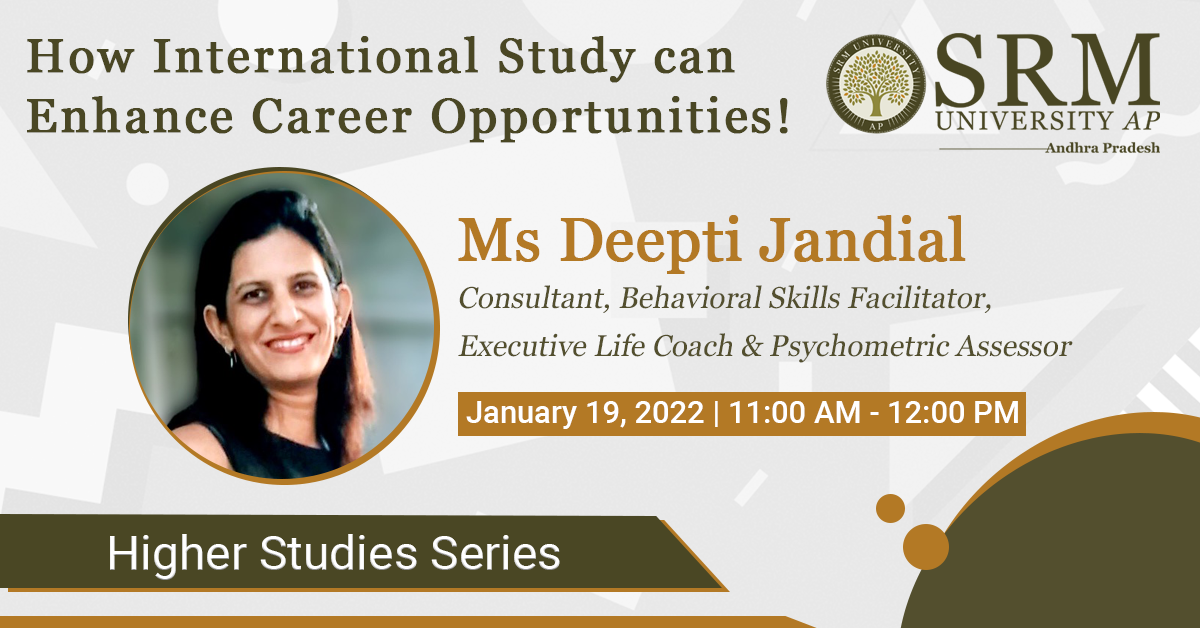 Studying abroad enhances employment chances in a variety of ways, simply put, it expands your horizons by taking you out of your comfort zone. In the Higher Studies Series “How international study can enhance career opportunities”, organised by the Office of International Relations and Higher Studies, Ms Deepti Jandial, Consultant and Behavioral Skills Facilitator, will present fresh and intriguing career opportunities of studying abroad. Interested participants can join this informative session on January 19, 2022, at 11.00 am.

Employers seek out people who have studied abroad because they realise they have something to give that others do not – the desire to complete higher education, the courage to attempt new things, and the confidence to do so. The lecture will be a comprehensive guide to why you should consider studying abroad and how you should. 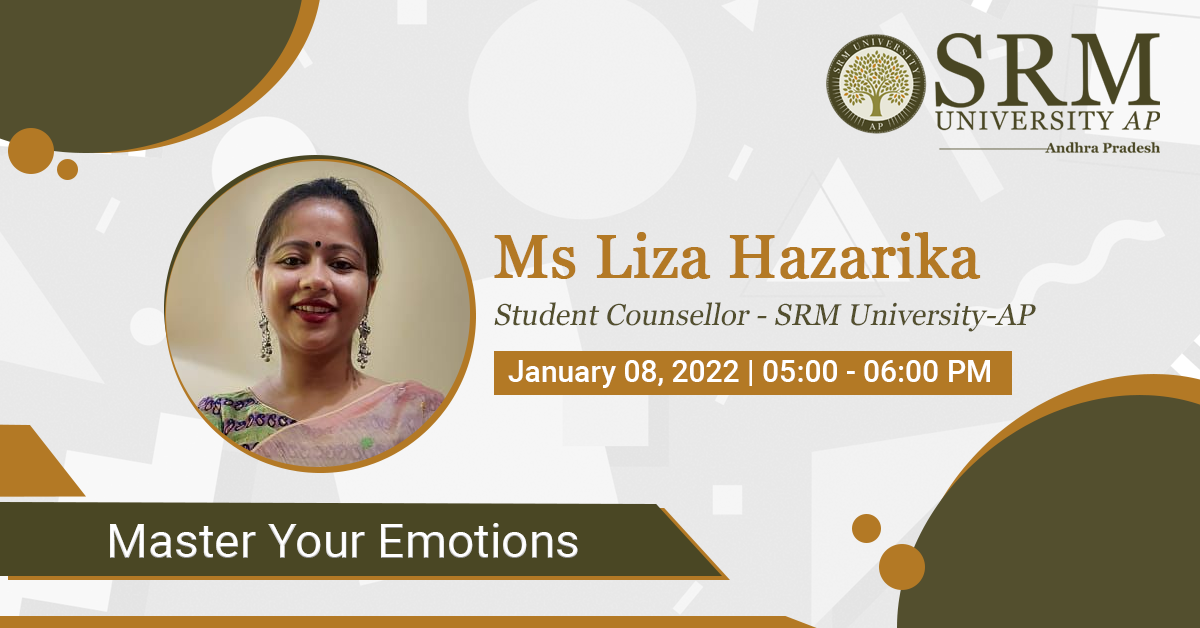 Tune in for this session on mastering your emotions with Miss Liza Hazarika to learn to keep yourself centred at all times and live a happy, healthy, and productive life.

Speakers from across the globe are invited for the International Lecture Series organised by the Office of International Relations and Higher Studies, SRM University-AP. The latest session of the series aims to provide insight into how new technological developments are changing the face of society. Mr Werner Fischer, Sustainable Development Consultant, will engage the participants on the topic “Innovation for Sustainable Smart Solutions” on January 10, 2022, at 11.30 am.

The lecture aims to provide a multidisciplinary approach to environmental studies, urban planning, and development. Focus on inventive technical developments is essential for the establishment of sustainable green societies. Such conversations with experts intend to challenge academic norms, examine established knowledge-power relationships, and shine a light on issues of equality, equity, diversity, and inclusion.

Mr Werner Fischer, Sustainable Development Consultant
Co-Author of “How to Create Smart Villages” book
Advisor at Brightmind.io
Advisor at UC Berkeley-led private-public sector, Rebuilding India Initiative.
Worked as a Director of research for the Smart Village Movement in India
BSc in Business Studies and Economics from the University of Konstanz
MSc in Technology Management (M.Sc.) from the Braunschweig University of Technology, Germany
Business Studies at University of California, Berkeley, Haas School of Business