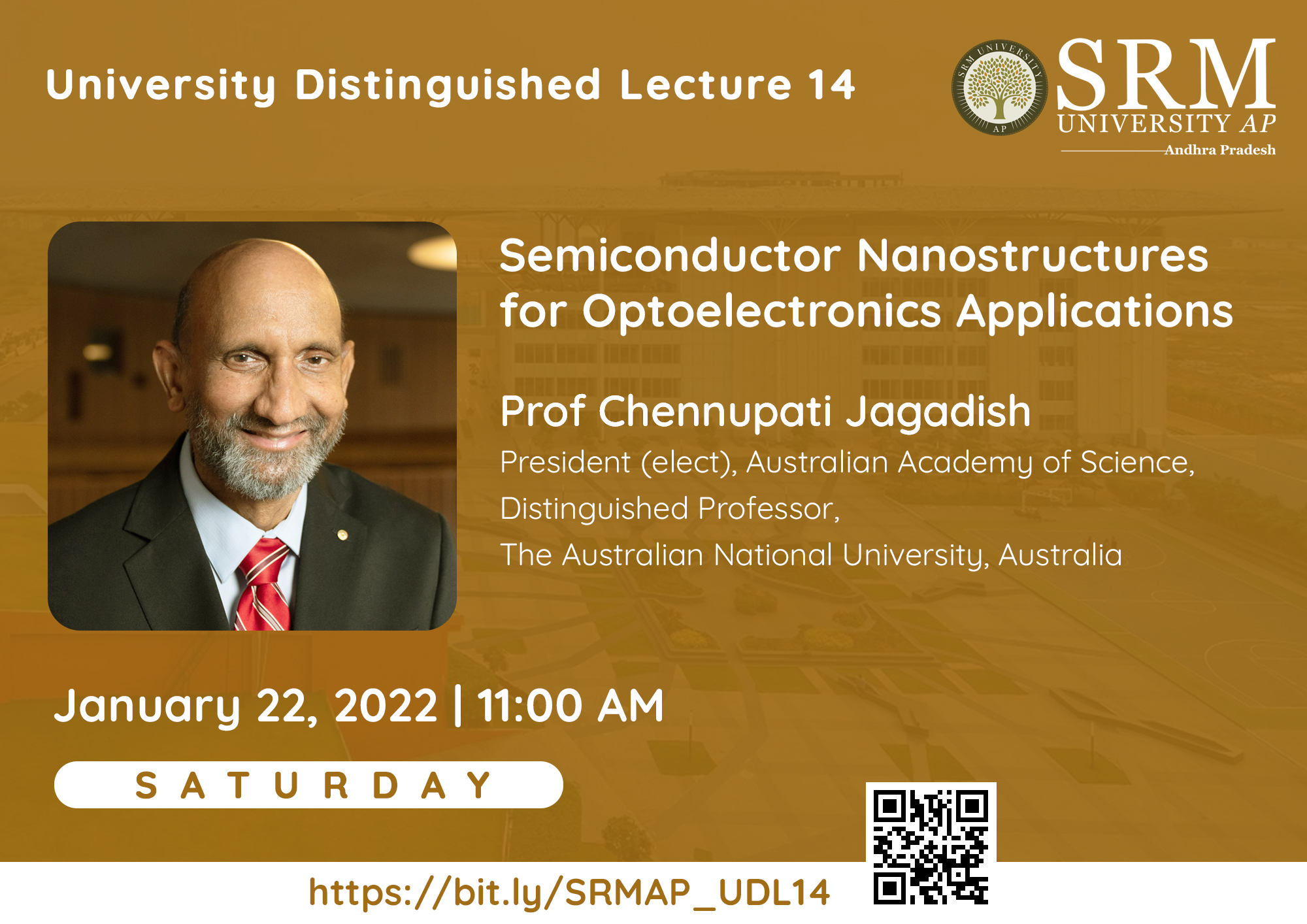 In the next installment of the University Distinguished Lecture, SRM University-AP brings to you Dr Chennupati Jagadish, a distinguished professor in Physics in the Research School of Physics and Engineering at the Australian National University. He leads the Semiconductor Optoelectronics and Nanotechnology Group as its head since its establishment in 1990 by him.

Semiconductors have played an important role in the development of information and communications technology, solar cells, solid state lighting. Nanowires are considered as building blocks for the next generation electronics and optoelectronics. In this talk, I will present the results on optoelectronic devices such as lasers/LEDs, THz detectors, energy devices such as solar cells, photoelectrochemical (PEC) water splitting and Neuro-electrodes. Future prospects of the semiconductor nanowires will be discussed.

Dr Jagadish moved to the Australian National University in the year 1990 and joined the newly established Department of Electronic Materials Engineering in the Research School of Physics and Engineering. He was the Vice-President and Secretary at the Australian Academy of Science for Physical Sciences for four years.

He makes a frequent appearance, by invitation, to various international conferences and seminars on Material Sciences, Electronics, Quantum Electronics, Semiconductors, Physics, Photonics, and Material Sciences. As an active member of the Material Research Society, IEEE, he has delivered many talks and guest lectures as well as organised several sessions in MRS, IEEE meetings throughout the world.

Dr Chennupati Jagadish is currently the Editor-in-Chief for Applied Physics Reviews. He was earlier the Editor-in-Chief for Progress in Quantum electronics and Co-Editor-in-chief for the International Journal of High-Speed Electronics and Systems. He is also the Editor for the Journal of Semiconductor Technology and Science, Springer Series in Material Science, Springer Series in Nanoptics and Nanophotonics, Elsevier Series in Semiconductors and Semimetals, IEEE Electron Device Letters, and Light: Science and Applications of Nature Publishing Group. He is a member of the Editorial Boards of over 20 journals including ACS Nano, Physica Status Solidi: Rapid Res. Lett., IEEE Nanotechnology Magazine, IEEE Photonics Journal, Solid State Electronics, among others.

He became an elected Fellow of the American Physical Society (2003). In 2020, he also became an elected member of the National Academy of Engineering for his contributions to the nanotechnology of optoelectronic devices. The Australian Research Council awarded him with the Federation Fellowship (2004-09) and with the Laureate Fellowship (2009-14).

It would be a privilege to have Dr Chennupati Jagadish, an astoundingly celebrated research personality, in our midst. We urge everyone to make the most of this opportunity. The University Distinguished Lecture (UDL) hosted by SRM University-AP is attended by about 2000 members from IITs, NITs, IISERs, Universities/Institutions, CSIR, DST, DBT, DRDO, DAE, ISRO, NARL, MoES and several others from different parts of the country.

SRM University-AP cordially invites everyone to the fourteenth University distinguished Lecture on January 22, 2022, Saturday at 11.00 am IST.