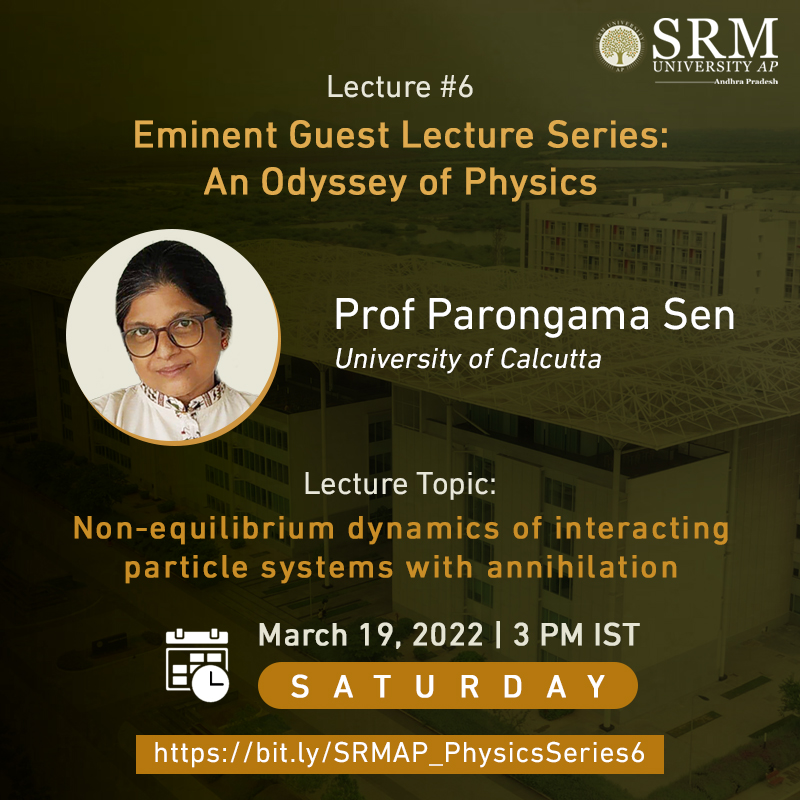 The Department of Physics is going to host the sixth instalment of the Eminent Guest Lecture Series: An Odyssey of Physics on March 19, 2022, at 03.00 PM IST with Prof Parongama Sen from the University of Calcutta as the keynote speaker. Dr Sen will be speaking on” Non-equilibrium dynamics of interacting particle systems with annihilation”.

Prof Parongama Sen has been teaching at the University of Calcutta as Professor since 2008. She received her PhD from Saha Institute of Nuclear Physics, Calcutta in 1993. She was also awarded APS-IUSSTF Professorship in 2012-13. Her research interests include statistical physics: phase transitions and critical phenomena in magnetic systems, networks, quantum systems, percolation etc. and dynamical phenomena in complex physical and social systems.

There has been tremendous research activity on the evolution of systems comprising of interacting particles in Statistical Physics over the last few decades. This lecture particularly considers those systems in which the particles (also called reactants) may get annihilated instantaneously upon contact or merged as a single species, both of which reduce the particle number. Some of these processes have a one-to-one correspondence with the coarsening dynamics of spin systems and play an important role in the development of non-equilibrium Statistical Physics.

Usually, one considers diffusive motion when the particles move freely, and some known results in this context will be discussed. Here, the speaker notes that the dynamics may also be considered in terms of population densities rather than individuals and examples include models of epidemic spreading.

Finally, she will focus on a model in which the reactant particles are driven by a dynamic bias that radically changes the scaling behaviour of the relevant quantities. The results will be presented for such a system, highlighting the microscopic dynamics, which reveal a crossover behaviour.

Register here for an informative session with Prof Parongama Sen.