Distinguished lecture on India’s initiatives on polar and ocean research

Distinguished lecture on India’s initiatives on polar and ocean research 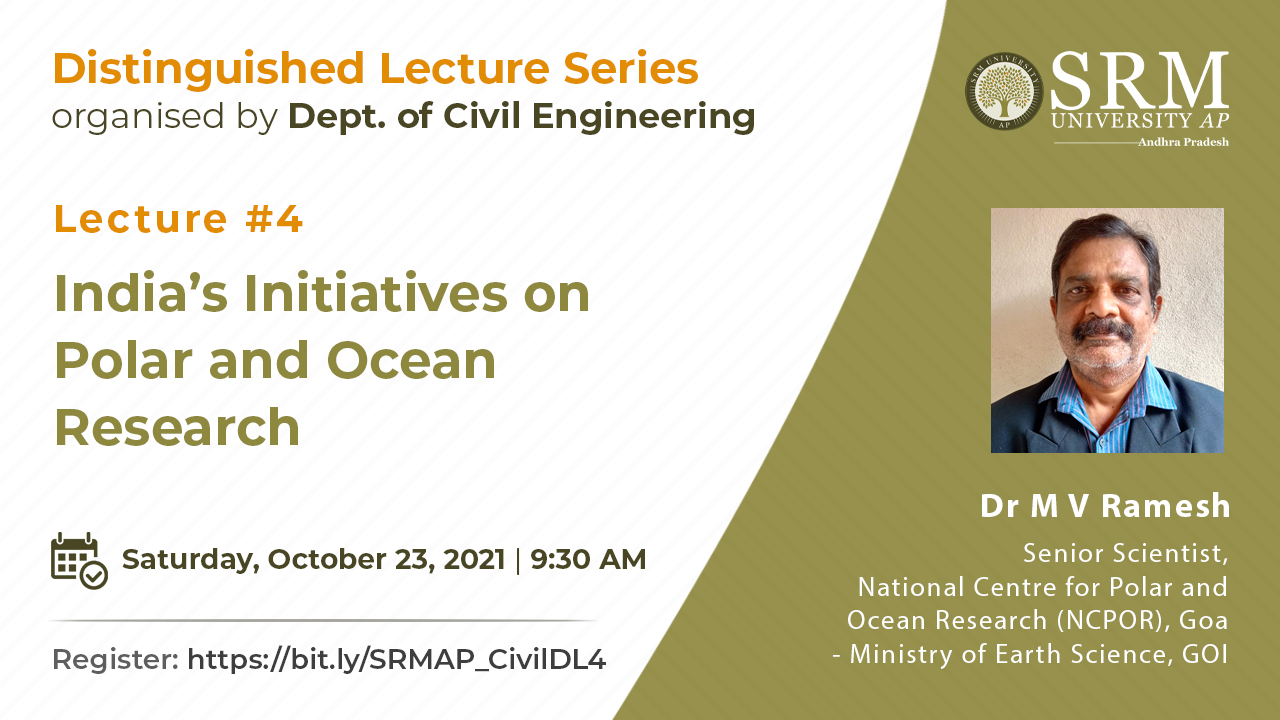 The Distinguished Lecture Series organised by the Department of Civil Engineering at SRM University-AP offers a congenial atmosphere in which students can connect with eminent scientists. The fourth episode in the series is scheduled to be held on October 23, 2021 (Saturday) from 9:30 am to 10:30 am. Dr M V Ramesh, Senior Scientist, National Centre for Polar and Ocean Research (NCPOR), Goa – Ministry of Earth Science, GOI will be the guest speaker to deliver the lecture.

The lecture will cover topics such as the scientific programmes focusing on bipolar activities i.e. Antarctica as well as Arctic multi-disciplinary approach studies. Logistic support provided for Antarctica in particular as a nodal agency, LCS(Legal Continental Shelf), Bathymetric surveys of EEZ(Exclusive Economic Zone) in the deeper waters, Southern ocean Oceanography which is supposed to control the monsoon of India as well as South Asian countries will also be discussed. Other topics include ice core analysis of Antarctica for the better understanding of paleoclimate, polar remote sensing studies, and cryospheric studies in polar regions and Himalayas.

Dr M V Ramesh is a Senior Scientist and coordinator who obtained his doctorate (PhD) from Andhra University, Visakhapatnam in 1994 in Marine Geology. He worked on sedimentology and Geochemistry primarily on continental shelf sediments off Kalingapatnam-Pentakota, the East coast of India. He has pursued his post-doctoral course in a DST sponsored project- a collaboration project between Geology and Anthropology at Andhra University, Visakhapatnam. He had been deputed to Adikavi Nannaya University as a Visiting Scientist for one year during 2007-2008 and his teaching services have been availed off successfully to the students of Department of Geo-informatics in the I, II, and III semesters for a period of nearly 1 year He had been deputed to various multi-disciplinary cruises ( inclusive in the capacity as Deputy Chief scientist) as many as 18 in Number comprising 450 ship days inclusive of EEZ surveys/cruises, Post Tsunami multi-disciplinary cruise off Andaman & Nicobar Islands, exploration of polymetallic nodules on onboard Sagar Kanya and including the one Southern Ocean Expedition(2009) which proceeded up to 66.5◦S i.e. touching the Antarctica waters on onboard Academic Boris Petrov a Russian vessel. He had been deputed to Oman in Indo-US-Oman multidisciplinary cruise for a period of 14 days onboard Sagar Kanya. Altogether, he had been deputed 850 days on official duties. He has to his credit 36 scientific papers in various National as well as International Journals related to the Bay of Bengal, Arabia and in oceanography as a whole. His research areas are primarily sedimentology, clay mineralogy primarily off-shelf sediments and deep-sea sediment cores. He had worked on RS studies and GIS Technologies in NRSA, Ministry of space, Hyderabad for a period of 12 weeks during 2006-07. He has been actively involved in Outreach activities for more than 10 years in giving his services to students, Professors, Scientists and delegates from four corners of the Nation as well abroad (schools, colleges, universities and R&Ds).

Join this intriguing online lecture on October 23, 2021, at 09.30 am and enrich your knowledge through the scholarly voice of Dr M V Ramesh!