CSE organises webinar on “Nanonetworking in the Terahertz Band (and Beyond): From Nanomaterials to Macrosystems” 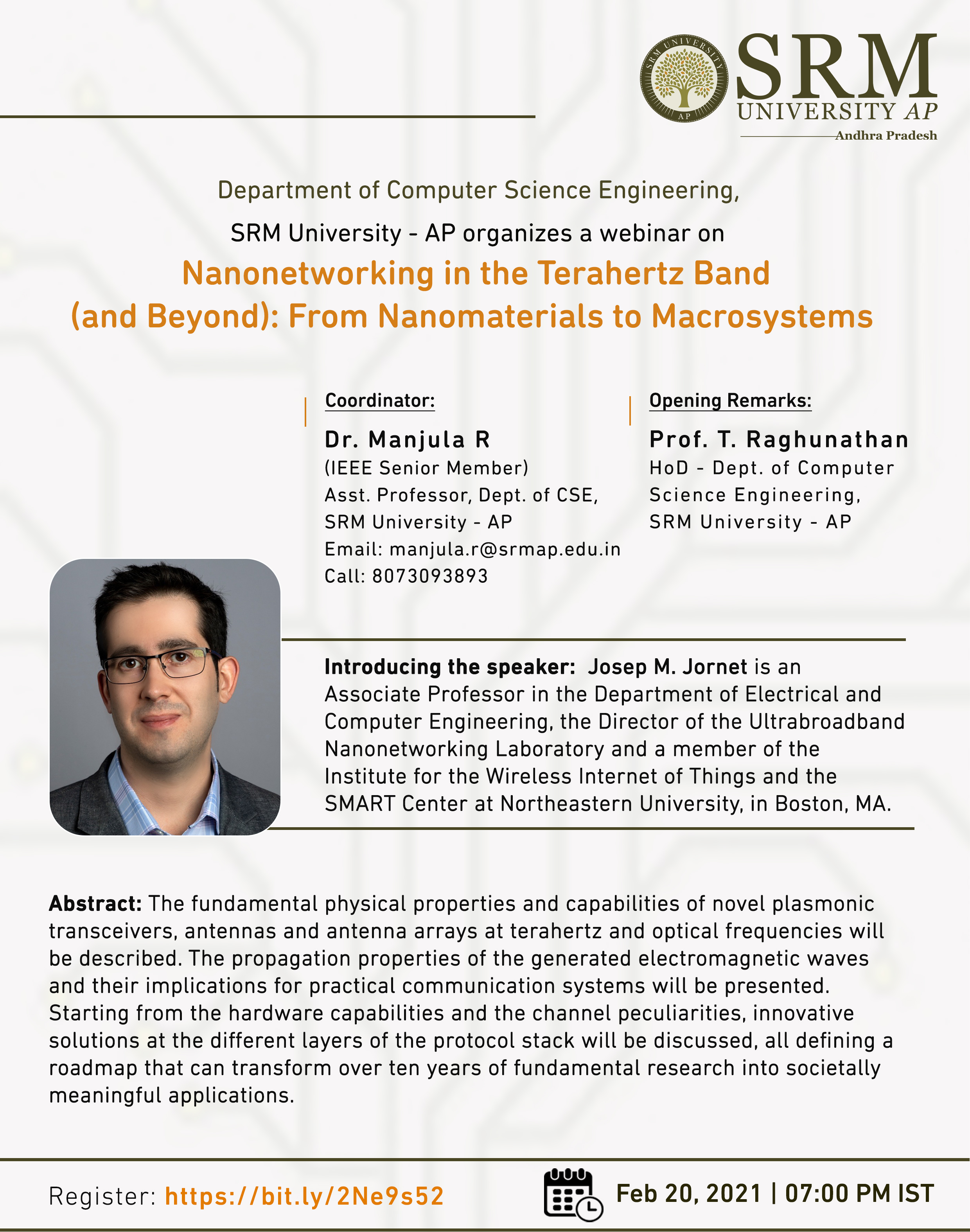 Department of Computer Science and Engineering organises a webinar on “Nanonetworking in the Terahertz Band (and Beyond): From Nanomaterials to Macrosystems” on February 20, 2021, at 7:00 PM IST. Dr Josep M Jornet, Associate Professor, Department of Electrical and Computer Engineering, Northeastern University, USA, is the distinguished speaker for the webinar.

Abstract: The possibility to control matter at the atomic and molecular scale opens the door to new physics, which can be leveraged into developing new types of devices with unprecedented capabilities. For the Communication community, the plasmonic properties of nanomaterials and nanostructures enable the development of miniature transceivers and antennas, which
intrinsically operate in uncharted spectral bands. The extremely small size of the devices and the unprecedentedly large bandwidths that these can excess opens the door to transformative applications across scales. In this talk, the state-of-the-art technology in electromagnetic nano communication and networks will be presented by following a bottom-up approach. The fundamental physical properties and capabilities of novel plasmonic transceivers, antennas and antenna arrays at terahertz and optical frequencies will be described. The propagation properties of the generated electromagnetic waves and their implications for practical communication systems will be presented. Starting from the hardware capabilities and the channel peculiarities, innovative solutions at the different layers of the protocol stack will be discussed, all defining a roadmap that can transform over ten years of fundamental research into meaningful societal applications.

About the Speaker: Dr Josep M. Jornet is an Associate Professor in the Department of Electrical and Computer Engineering, the Director of the Ultrabroadband Nanonetworking Laboratory and a member of the Institute for the Wireless Internet of Things and the SMART Center at Northeastern University, in Boston, USA. He obtained a Bachelor in Science (BS) in Telecommunication Engineering and a Masters (MSc) in Information and Communication Technologies from the Universitat Politecnica de Catalunya, Barcelona, Spain, in 2008. He received his Doctoral Degree in Electrical and Computer Engineering from the Georgia Institute of Technology, Atlanta, GA, in 2013. From August 2013 and August 2019, he was a Faculty at the Department of Electrical Engineering in the University at Buffalo, The State University of New York. His current research interests are in Terahertz-band communication networks, Wireless Nano-bio-communication Networks and the Internet of Nano-Things. In these areas, he has co-authored more than 140 peer-reviewed scientific
publications, one book, and has also been granted 4 US patents, which accumulate over 9,000 citations (h-index of 43) as of February 2021. He is serving as the lead PI on multiple grants from US federal agencies including the National Science Foundation, the Air Force Office of Scientific Research and the Air Force Research Laboratory. He is also the Co-Editor-in-Chief of Elsevier Nano Communication Networks Journal and serves in the Steering Committee of the ACM Conference Series on Nanoscale Computing and Communications. He is a recipient of the National Science
Foundation CAREER award and several other awards from IEEE, ACM and UB. He is a member of the ACM and a senior member of the IEEE.

Join the enlightening session with Dr Josep on February 20 and avail the opportunity to know the latest technology and innovations in the domain of Nanonetworking.