A Pertinent Discourse on Modern Secularism in the Indian context

A Pertinent Discourse on Modern Secularism in the Indian context 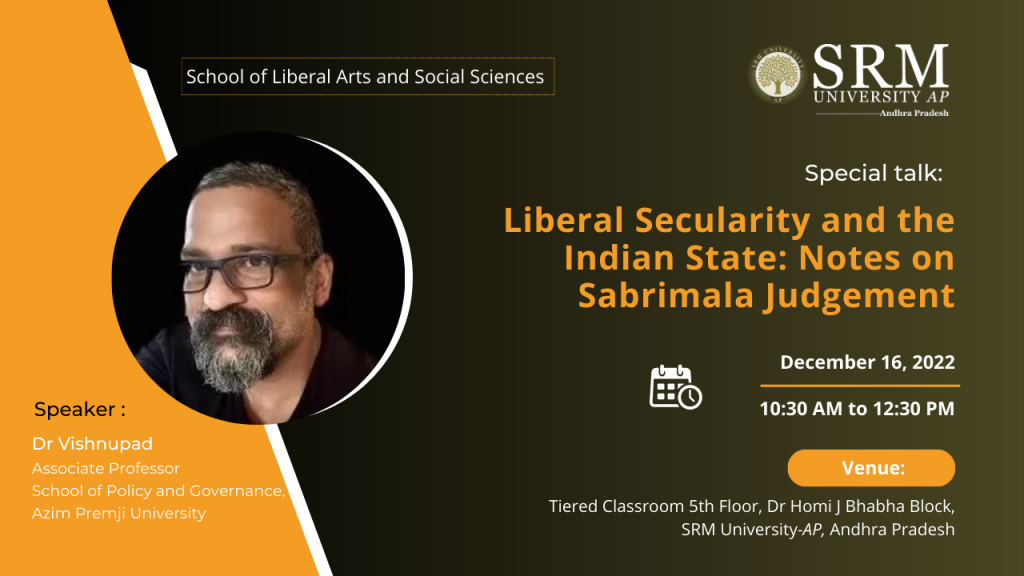 Modern secularism posits asymmetrical alignment between religious imaginaries and political sovereignty that often lapse with the autonomy of freedom. The School of Liberal Arts and Social Sciences is organising a special talk on “Liberal Secularity and the Indian State: Notes on Sabrimala Judgement” on December 16, 2022. Renowned academician Dr Vishnupad, Azim Premji University, Bangalore, will address the session. The lecture will expound on the limitations of exercising juridical secularism in issues resonating with religious evocation and confronting invasive autonomy on freedom.

Modern forms of secularism in liberal and postcolonial states (a) affirm the ascendancy of the political over the religious, and (b) frames the transactional relationship between them, which includes, across a continuum, a relation of distance or intimacy, neutrality and non-discrimination, autonomy, tolerance and publicity within the proscriptions set by political sovereignty. Within these parameters, juridical secularism in India begins its trajectory in India with the promise of expansive freedom to soon, however, be curtailed by an avowed reformist urgency. While laying out this narrative of secularism in India, this talk engages the dissenting voice in the Sabrimala judgment (2018). It recognises in it yet another searing questioning, if not dislocation of, the privileges of juridical hermeneutic in determining the core of any religious formation. The challenge proximates, without rigorously replicating or fleshing out, what, in anthropological circuits, has been called the “restitution of intelligibility” argument. Any comprehension of and sincere engagement with religious imaginaries and sensibilities, the latter argues, demands an ethical recovery of its innate and immanent rhythms; this recovery subsequently, however, doesn’t imply submission to the putative religious imperatives as much as a normative, political and open-ended engagement.

Join the lecture to participate in a germane discourse on the advent of modern secularism in the Indian social scenario!