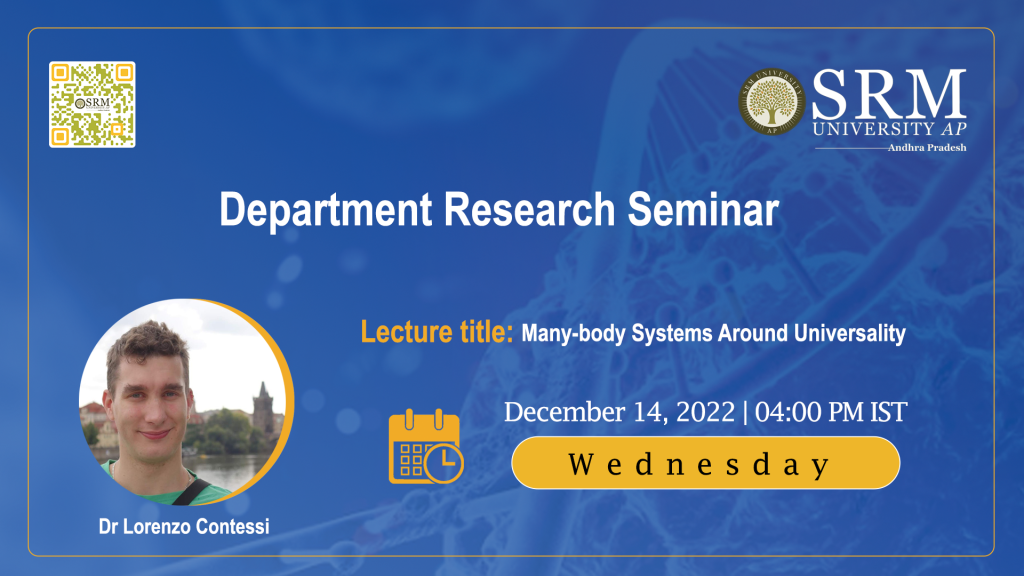 International research exposure is a prerequisite to developing an analytical bent of mind and knowledge acquisition. Global exposure help acquaint scholars with the nuances in the recent research domains and methodology. The Department of Physics is organising a Department Research Seminar to promote research discourse with eminent scientists and scholars from all around the world. The seminar will be addressed by Dr Lorenzo Contessi, Postdoctoral Researcher, IJCLabs, on December 14, 2022. In this seminar titled “Many-body systems around universality”, Dr Contessi will discuss various universal systems, especially in the unitarity universality class.

Universal systems are quantum mechanical objects that can be described similarly despite having different typical sizes, energies, and degrees of freedom. This is possible because they share identical few-body properties. Unitarity is arguably the most common universality class for low-energy physics and can be found in hadronic, nuclear, and atomic fields. This interconnection between fields is important because it allows for the passage of knowledge from one field to another. This is of special benefit to the fields in which very little is experimentally known since emergent phenomena can be predicted from more widely known sectors of physics. What is the “best” theory to describe the emergent phenomena maintaining interdisciplinarity is not a simple question to be answered. However, effective field theories result is the most natural framework for this search for their systematic improvability and the connection to the underlying physics of the various universal systems.

Join the webinar to learn how to build an effective quantum mechanical theory, how to pass knowledge from one field to others, and what phenomena emerge in many-body systems.