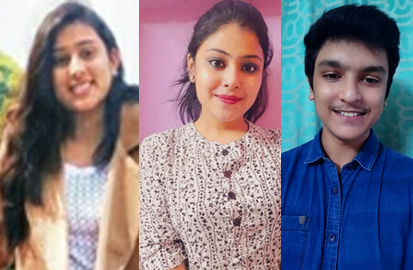 Global plastic waste is increasing rapidly. The strategic management of plastic waste and recycling can preserve environmental species and associated costs. The utilization of plastic can be done by introducing Blockchain during plastic waste recycling. Automation for the segregation and collection of plastic waste can effectively establish a globally recognizable tool using Blockchain-based applications. Collection and sorting of plastic recycling are feasible by keeping track of plastic with unique codes or digital badges throughout the supply chain. Efficient recycling technology is essential to reduce plastic pollution. Many technologies have been employed to enhance plastic recycling. Among them, blockchain is promising for plastic recycling and circular economy (CE). Blockchain, a distributed ledger, consists of some ordered blocks which are unchangeable. This can be considered an exemplary way to push the transactions of their customers under the same blockchain technology. The research group used machine learning techniques to predict plastic generation globally so that they could see the impact it will make in the coming future. The students have used ARIMA – Auto-Regressive Integrated Moving Average for the study.

The potential idea is to utilize an approach wherein recyclers can keep track of generated waste as it moves through the various chains. A platform that works by tracking recycling activities across a local recycling supply chain on the Blockchain. When this will be publicly available, consumers can also use the ledger info to make more informed purchasing decisions. The Blockchain can be utilized to track individual items through the recycling supply chain by creating physical markers like QR codes.

The suggested Blockchain-based platform can be implemented in various nations with an autonomous waste collector and storage system. This process can be expanded to individual collectors and storage systems. The novel process will be created by incorporating a reward-based Blockchain scheme with the collaboration of global businesses and local waste collectors. The proposed model further allows the effective sharing of databases among various supply chains to create a CE.

Talking about the social implications of the research, the students firmly believe that the study will result in the introduction of new technology in the recycling industry and promote awareness about technology in rural areas. Developing a platform and implementing blockchain and other facilities will be the focus of these young innovative brains of SRM University-AP in the forthcoming days.

CRIDAP appoints Dr Ghanshyam Pandey as an expert for agriculture 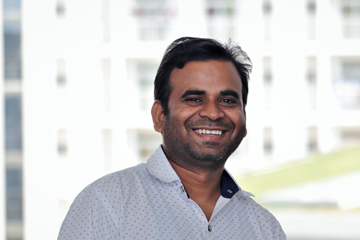 Dr Ghanshyam Pandey, Assistant Professor of Economics, SRM University – AP has been appointed as an expert for agriculture, rural development, livelihood issues, and climate change and agriculture by The Centre of Integrated Rural Development for Asia and Pacific (CRIDAP). CRIDAP is an intergovernmental and autonomous organization and has 15 member countries. The member countries are Afghanistan, Bangladesh, Fiji, India, Indonesia, Iran, Lao PDR, Malaysia, Myanmar, Nepal, Pakistan, Philippines, Sri Lanka, Thailand, and Vietnam. His tenure of appointment will be up to 2024.

About the organisation:
The Centre on Integrated Rural Development for Asia and the Pacific (CIRDAP) is a regional, intergovernmental and autonomous organisation. It was established on 6 July 1979 at the initiative of the countries of the Asia-Pacific region and the Food and Agriculture Organization (FAO) of the United Nations with support from several other UN bodies and donors. The Centre came into being to meet the felt needs of the developing countries at that time as an institution for promoting integrated rural development in the region. From the original six members, CIRDAP has now grown up as a Centre of 15 member countries. The member countries are Afghanistan, Bangladesh (Host State), Fiji, India, Indonesia, Iran, Lao PDR, Malaysia, Myanmar, Nepal, Pakistan, Philippines, Sri Lanka, Thailand and Vietnam. Operating through designated contact ministries and link institutions in member countries, CIRDAP promotes regional cooperation. It plays a supplementary and reinforcing role in supporting and furthering the effectiveness of integrated rural development programmes in Asia and the Pacific.

An invited lecture on technologies for connected vehicles 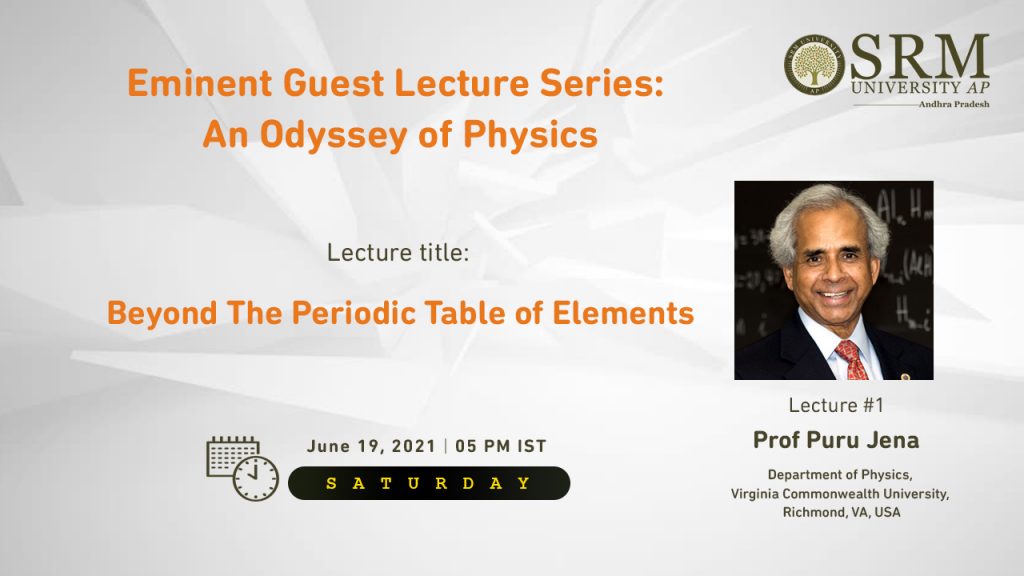 An invited lecture, “Technologies for Connected Vehicles”, will be organized by the Department of Electrical and Electronics Engineering (EEE), SRM University-AP, Andhra Pradesh, on June 19, 2021, at 11.00 am. In this online session, Dr Ramani Kalpathi, guest faculty at BITS Pilani, will give an introduction to intravehicle networks with a focus on CAN, LIN, Flexray, MOST, Ethernet, and Bluetooth networks introducing the frame formats, sample hardware implementation, and SAE formats.

Dr Ramani Kalpathi is the founder of Powersoft Systems and The ARM Academy. He earned his PhD in Electrical Engineering from Texas A&M University, USA, and M.S in Electrical Engineering from IIT Madras. The use of Wifi and IoT technologies and their presence for ubiquitous networks with typical samples of synchronous messages will be presented for connected technologies during the lecture. Implementation of Electic vehicles and the need for continuous data monitoring for autonomous vehicles may also be discussed for the purpose of diagnostics and reliability.

All interested B.Tech, M.Tech, and PhD students from any university are welcome to join the lecture upon registration.

“The Role of Conductive Nanoparticles in Anaerobic Digestion: Mechanism, Current Status, and Future Perspectives” published in the Chemosphere Journal discusses in detail the application of conductive nanoparticles to enhance the AD process efficiency and the interaction between microbes in anaerobic conditions for electron transfer with the help of CNPs. Application of a variety of conductive nanomaterials as an additive is discussed with their potential biogas production and treatment enhancement in the anaerobic digestion process. The Impact factor of the journal is 5.77.
DOI: https://doi.org/10.1016/j.chemosphere.2021.130601

The said research project has been carried out under the scheme of “Mentoring of Engineering Teacher by an INAE Fellow”, financially supported by the Indian National Academy of Engineering. The work goes forward in close collaboration with Pulsed Power & Electromagnetic Division, Beam Technology Development Group, Bhabha Atomic Research Centre (BARC)-Vishakhapatnam.

The future projects of Dr Tewari involve working on simulations related to the compact IEC for study, analysis, optimization of different parameters of an IEC system and related experimentation in collaboration with BARC. 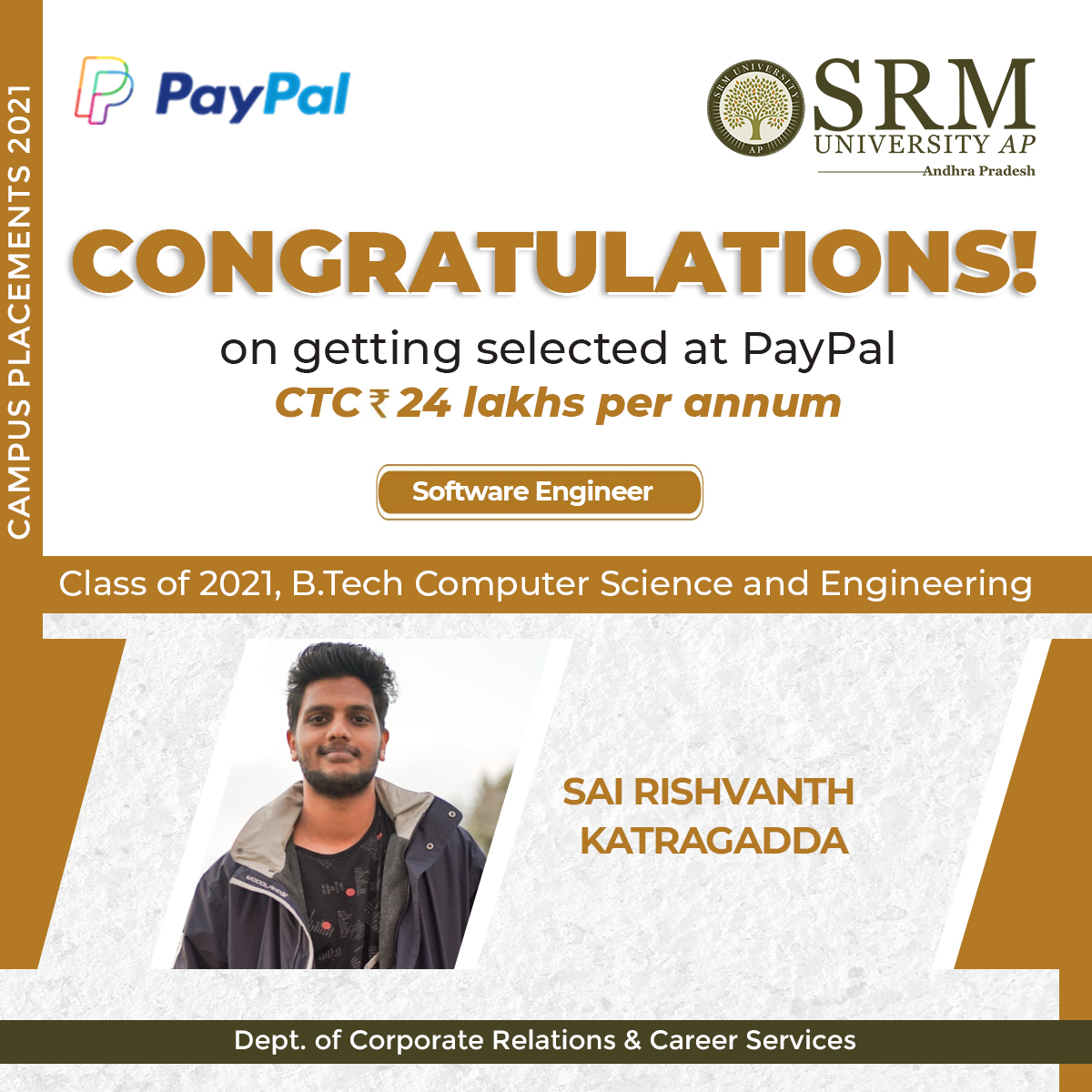 Prof N Balakrishnan, Honorary Professor, Super Computer Education and Research Centre, Indian Institute of Science (IISc.), Bengaluru, delivered an enthralling talk on “Data to Discovery in Information Security” under the auspices of University Distinguished Lecture Series organized by SRM University – AP, Andhra Pradesh. Prof V S Rao, Vice-Chancellor, along with Prof D Narayana Rao, Pro Vice-Chancellor, and the conveners welcomed him. Extending his warmest welcome, Prof V S Rao emphasized on the significance of Data and Information Security and the great interest and concerns it imposes in the recent times as well as the future. He says, “In the last two decades, data security concerns have increased exponentially along with emerging data reserves. Abundance of data without proper security with pose more threats than solutions.” On that note, he requested Prof N Balakrishnan to enlighten the audience on various issues pertaining to raw data security.

Prof T Ragunathan, Head of the Department of Computer Science introduced Prof N Balakrishnan to the participants. Prof N Balakrishnan lecture encompassed the explosion in data and the “Revenge of Silicon”, which made the emergence of Artificial Intelligence inevitable. He emphasized on the storage revolution which is reflected in the smaller systems comprising of more complex networks, as compared to the earlier version of computers which were used primarily for computing and processing. He enlightens, “Characterized by explosion in velocity, volume, and variety, the data generated by humans and machines coexist in the big data scenario. Earlier, we spoke of the convergence of Information and Communication Technology (ICT), and now we have moved ahead with Nano, Bio, Info, and Cogno (NBIC) convergence.”

Prof N Balakrishnan dedicated the second half of his lecture by explaining the “Revenge of Silicon”. He used the periodic table to explain that although Carbon and Silicon belong to the same 4th group in the periodic table, mankind preferred Silicon over Carbon. Further, the paradigm shifted with the advent of computers which were programmed to mimic humans. In addition, the communication revolution resulted in its enhanced capability along with numbers. Presently, 1.72 billion websites are operative, there are billions of mobile phone users, the Internet of Things (IoT) have been established, wireless networks, and other complex systems. Dr N says, “Technology has become an integral part of the society with emerging Cyber-physical systems, and social networks. In the near future, computers would begin behaving more and more like humans, which is referred to as the Revenge of Silicon. Further, NBIC will enable biological complex systems (human body parts) to be replaced by silicon engineered parts, heralding towards a new doctrine.”

Drawing examples from his research sprawled across four decades, Prof N Balakrishnan expressed concerns about the tremendous data being stored and used across networking platforms. He explains, “Data storage speed doubles every 9 months. All the information known to mankind since the beginning of civilization can be stored in a single computer. The social network of computers has its negatives in the form of terrorism which has recently entered the computer world. Security of such a world is an important issue.” Prof N Balakrishnan concluded his lecture by stating that mathematical predictive models can be used for a better understanding of the data attack detection. He established that Community Detection based BOTSPOT will provide a faster detection algorithm to estimate attacks thereby aiding concerns of data attacks.

Ms Anita Sakuru to narrate her experience as entrepreneur and innovator 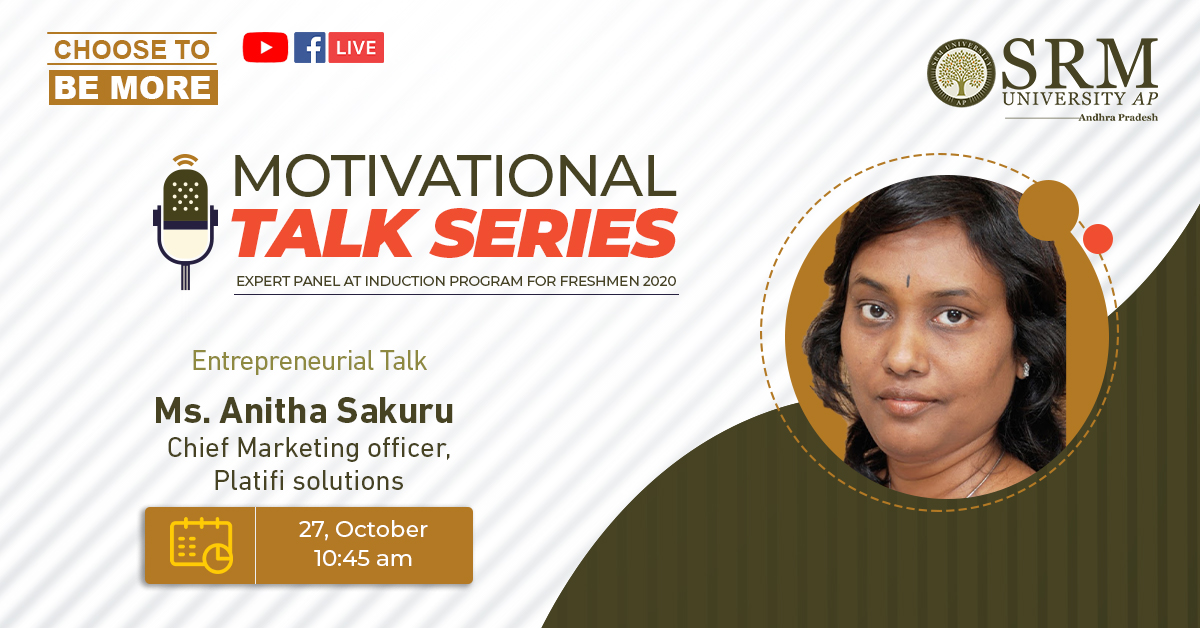 After the success of the entrepreneurial talk by Ms Anita Sakuru in the first edition of the Orientation Programme 2020, Ms Anita Sakuru has been earnestly requested by SRM University-AP, Andhra Pradesh to inspire and enlighten the audience in the 2nd Orientation Programme 2020. Ms Anita Sakuru will be conducting the session with the Freshmen 2020 on October 27, 2020, at 10.45 a.m. Ms Sakuru is prominently known for her flair for entrepreneurship and innovation. She is the co-founder of Pragma Inc, an IT consulting firm founded in 1995. She served as an Executive Vice President for Kenexa and was instrumental in the IT transformation of the company. She has produced and judged a startup show on TV5 named Startup Junction. In addition, Ms Sakuru, is currently a chapter head for 50k ventures, a network that funds startups. 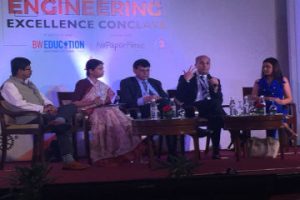 July, 2019: Jamshed Bharucha, VC of SRM AP, Amaravati was invited as a panel member in the second edition of BW Businessworld Engineering Conclave held in New Delhi. In the premise of increasing dynamism in the industry, the discussion on ” Future Skills: Are our engineers ready to adopt the global changes?” hold its own relevance.

Bharucha expressed his concern saying, ” Most of the engineers are not working in their field. What is missing from the curriculum is skill development that would help in learning new things. We are still following a failed way of learning i.e. passive learning, where the communication is one way but in SRM, we promote active learning by involving students during the process of learning as this will facilitate the problem-solving skills”. SRM AP has active learning classrooms where regular sessions are designed with a relentless focus on improving student learning outcomes and ensuring student success in high-demand careers.  Our students actively participate and engage in discussion, debates, and conversations that intrigues their interest and improves their skills. Also, for the first time in India, SRM AP introduces Collegiate Accelerator Programme presented by Minerva forum to advance the intellectual development of each student.