Set high goals, have plan to achieve them, students told

Set high goals, have plan to achieve them, students told 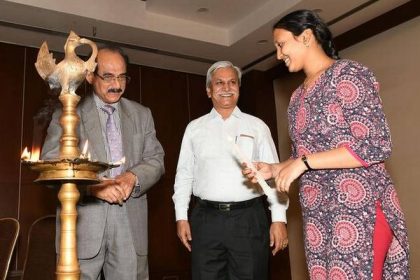 Youngsters get insight into career, planning at The Hindu education fair

“Preparation is key to success. Aim high in life and chart out a well-thought-out plan of action to achieve it,” management consultant M.C. Das urged students here on Saturday.

He was addressing young learners and their parents at The Hindu Edge Education Fair here.

Urging them to banish negative thinking which could create obstacles between them and their goals, he said looking at the brighter side could help a great deal in overcoming hurdles.

Mr. Das said for career planning, students must try to learn more about their own self, relate to the courses and find out more about jobs and courses open to them.

Stressing the need for self-analysis, he said if positive traits like accepting criticism, working in a team, winning friends, working hard, being open to suggestions and working with a sense of responsibility could help them climb the ladder of success faster, negative qualities such as intolerance to criticism, carelessness, forgetfulness and irresponsibility could mar their future prospects.

Registrar of SRM University D. Gunasekaran said the institution’s Amaravati campus would offer a wide range of courses designed to enable students to pick their choice and broaden their horizons. He said besides the School of Engineering and Applied Sciences being offered in 2017, the university would open School of Liberal Arts and Basic Sciences in 2018 which would be followed by School of Business, School of Law and School of Medicine and Health Sciences. In the interactive session that followed, a parent expressed concern over reports of artificial intelligence, robots and automation taking away major chunk of jobs in the software sector.

Besides SRM, leading universities like Amrita, Vignan’s and VELS put up stalls at the education fair visited by students and their parents to make enquiries about suitable courses for a good career. SRM University was the platinum sponsor of the event, Red FM was radio partner while TV-5 was the television partner.

The Education Fair caravan will reach Sri Kasturi Devi garden in Nellore on Sunday (December 3), at Hotel Green Park in Visakhapatnam on Dec. 9 and at hotel Anand Regency in Rajahmundry and at Minerva Grand in Tirupati on Dec. 10.