The foundation stone for the University was laid in November last year, by the Andhra Chief Minister. 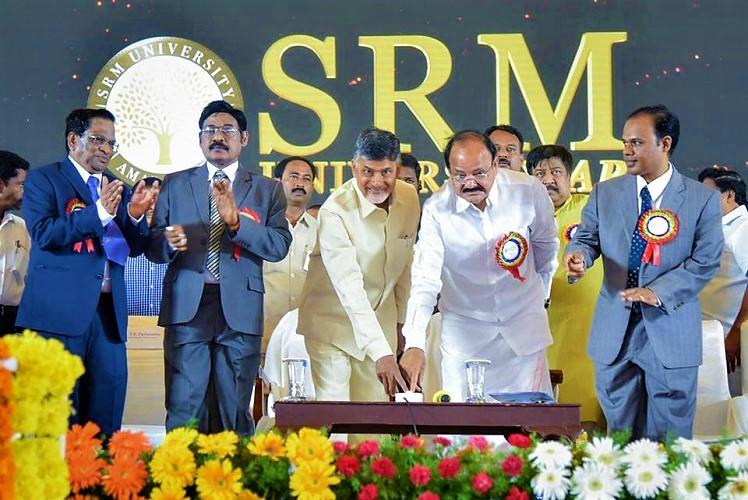 This is the first educational institute to be established in the upcoming capital of the state.

“This is the first educational institute to be established in the capital with a vision of providing quality education and international exposure. This university’s long term plans will cater to around 30,000 students pursuing careers in multiple fields,” the Chief Minister said in a statement.

Speaking at the inaugural event, Venkaiah Naidu said that SRM University would ensure that students need not go abroad to study and avail top-class facilities. He assured the Centre’s support to the Andhra government, to convert Amaravati into a global city.

“The capital city is a part of the Make–in–India campaign led by Prime Minister Narendra Modi and the Modi-Babu pair is a winning combination for the state,” he told the gathering.

“SRM University has created a brand equity for itself, in a short period. I appreciate it for setting up the first campus in Amaravati. I’n impressed that the University management came up with its building within a short span of five months, and is starting the academic session from this year,” he said in a statement later.

Meanwhile, Chandrababu Naidu said that education was one of the key aspects that his government was focused on, and added that they were striving to develop education, healthcare and industries in Amaravati.

He also told the gathering that 10 more universities would come up in the state, including VIT (Vellore Institute of Technology) University and Amrita University.

The foundation stone for the University was laid in November last year, by Chandrababu Naidu.

In April this year, the campus opened admissions for the 2017-18 batch, to apply for its B.Tech engineering programmes.

This university also said that it plans to grow from being engineering centred, into an integrated multi-disciplinary institution offering courses in other fields such as management, law, medical sciences, pure sciences and liberal arts.