A new aqueous electrolyte to enhance the yield of Ammonia

A new aqueous electrolyte to enhance the yield of Ammonia 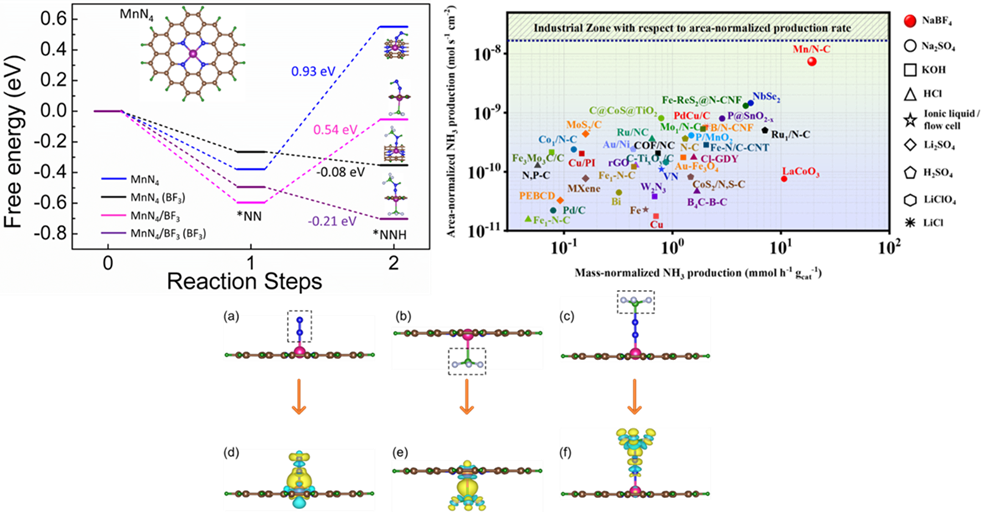 The Department of Physics is proud to announce that Prof Ranjit Thapa and his PhD scholar Mr Samadhan Kapse have published an article titled “Lewis acid-dominated aqueous electrolyte acting as co-catalyst and overcoming N2 activation issues on catalyst surface” in the most prestigious and highly cited multidisciplinary research journal, ‘Proceedings of the National Academy of Sciences’ (PNAS), having an Impact Factor of 11.2. The research was done in collaboration with Ms Ashmita Biswas, Mr Bikram Ghosh, and Dr. Ramendra Sundar Dey from the Institute of Nano Science and Technology (INST), Punjab.

The growing demands for ammonia in agriculture and transportation fuel stimulate researchers to develop sustainable electrochemical methods to synthesize ammonia ambiently, to get past the energy-intensive Haber Bosch process. But the conventionally used aqueous electrolytes limit N2 solubility leading to insufficient reactant molecules in the vicinity of the catalyst during electrochemical nitrogen reduction reaction (NRR). This hampers the yield and production rate of ammonia, irrespective of how efficient the catalyst is. Herein we introduce a new aqueous electrolyte (NaBF4), which not only acts as an N2-carrier in the medium but also works as a full-fledged “co-catalyst” along with our active material MnN4 to deliver high yield of NH3 (328.59 μg h-1 mgcat-1) at 0.0 V vs RHE. BF3-induced charge polarization shifts the metal d-band center of MnN4 unit close to the Fermi level, inviting N2 adsorption facilely. The Lewis acidity of the free BF3 molecules further propagates their importance in polarizing the N≡N bond of the adsorbed N2 and its first protonation. This push-pull electronic interaction has been confirmed from the change in d-band center values of MnN4 site as well as charge density distribution over our active model units, which turned out to be effective enough to lower the energy barrier of the potential determining steps of NRR. Resultantly, a high production rate of NH3 (7.37 × 10-9 mol s-1 cm-2) was achieved, approaching the industrial scale where the source of NH3 was thoroughly studied and confirmed to be chiefly from the electrochemical reduction of the purged N2 gas.

A Brief Summary of the Research

The widely highlighted problem of NRR is that the competitive HER is most likely worked upon with several catalyst development and electrolyte modifications, while the N2 solubility and activation issues in the aqueous medium are generally neglected. This work justifies our aim to contribute towards this troublemaker by using NaBF4 as a working electrolyte, which served as a “full-packaged co-catalyst” along with MnN4, reinforcing the NRR kinetics at the cost of low overpotential. The Lewis-acidic nature of BF3 induced adduct formation with the N2 molecules acted as a carrier of N2 gas into the medium in vicinity of the electrocatalyst. Simultaneously, the charge polarization over MnN4 active site due to BF3 delocalized the metal d-band centre, which triggered N2 adsorption on the catalyst site. Under this condition, free BF3 form the medium interacted with the adsorbed N2 and brought about the facile polarization of the N≡N bond and its first protonation at a much lower energy barrier. This push-pull charge transfer effect enormously helped to overcome the potential determining steps and this BF3 mediated NRR resulted in a huge production rate of NH3, which could be compared to that of industrial scale, which was not achieved so far with any aqueous or ionic liquid electrolytes. In short, this kind of user-friendly aqueous electrolyte is being investigated for the first time for NRR. Since BF3 displayed tremendous potential in triggering the kinetics of NRR, this new finding may encourage researchers to work more on aqueous electrolyte designing towards an even improved NRR performance of the electrocatalysts. Not only that, electrocatalysts could also be functionalized with BF3 derivatives, which could be one entirely new route of study in the field of NRR.

Ammonia is considered as the most abundant and widely used synthetic fertilizer in the world. The sole mean of large-scale ammonia production relies on the century-old Haber-Bosch process, which takes in more energy than it can produce, while the electrochemical nitrogen reduction reaction (NRR) offers a carbon-free and sustainable way of ammonia synthesis. However, electrochemical NH3 synthesis is often arrested by a few factors such as NH3 detection, contaminations from source gases, nitrogen-containing chemicals and the presence of labile nitrogen in the catalysts. In the recent past, several protocols have been proposed to correct the fallacious results. Recently, Choi et el. have concluded that it is difficult to believe from the too-low yield rate of NH3 that the reduction of N2 has actually occurred in the aqueous medium. It is noteworthy that the electrolyte plays a crucial role and offers a suitable environment for any electrochemical reactions to occur. However, the issue with the solubility of N2 in conventional aqueous electrolytes is a real troublemaker to achieve a high yield and production rate of NH3 during electrochemical synthesis. Therefore, it is necessary to solve the most important issue i.e., to solvate a promising concentration of N2 molecules into the electrolyte such that it becomes accessible to the catalyst surface for its subsequent reduction.