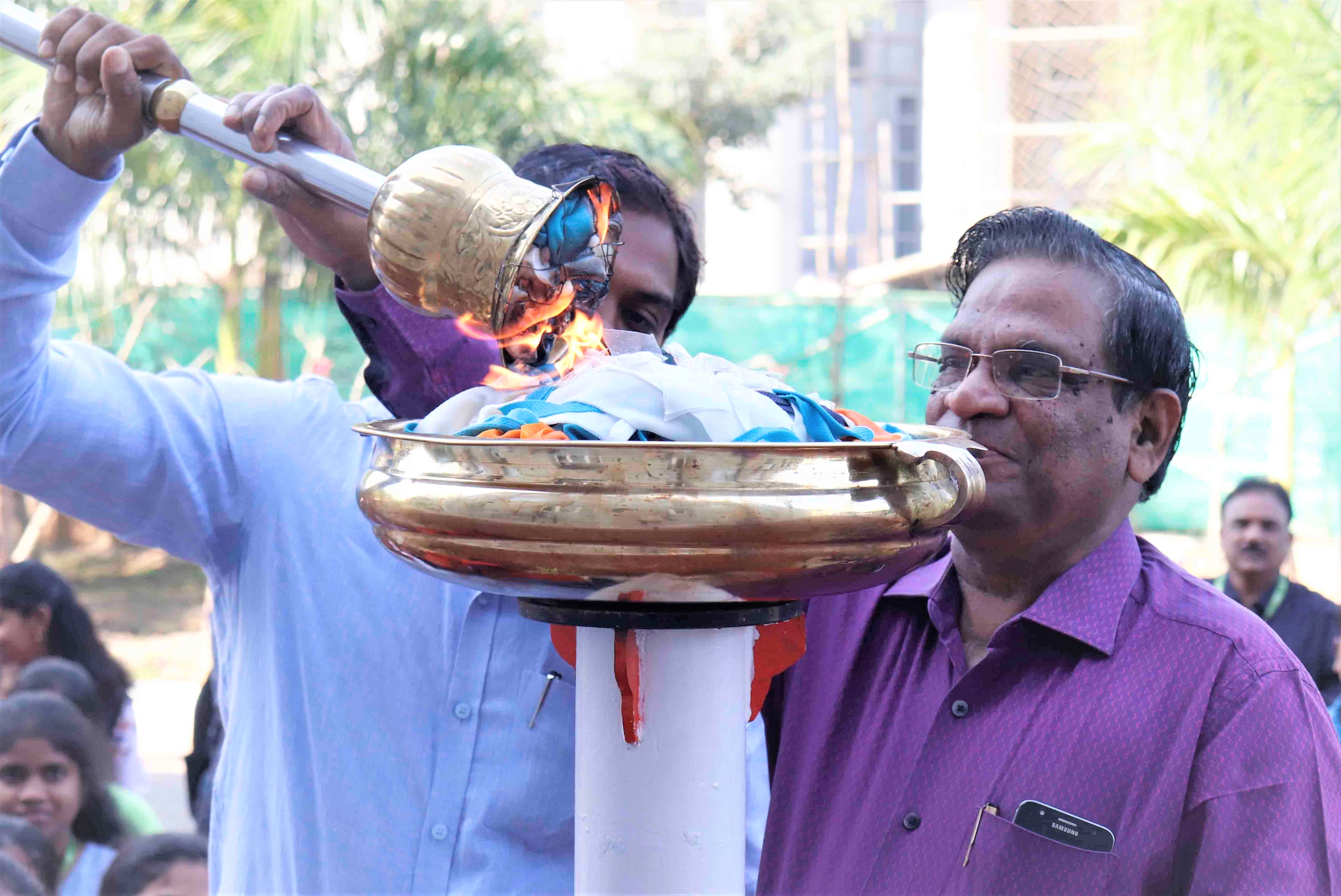 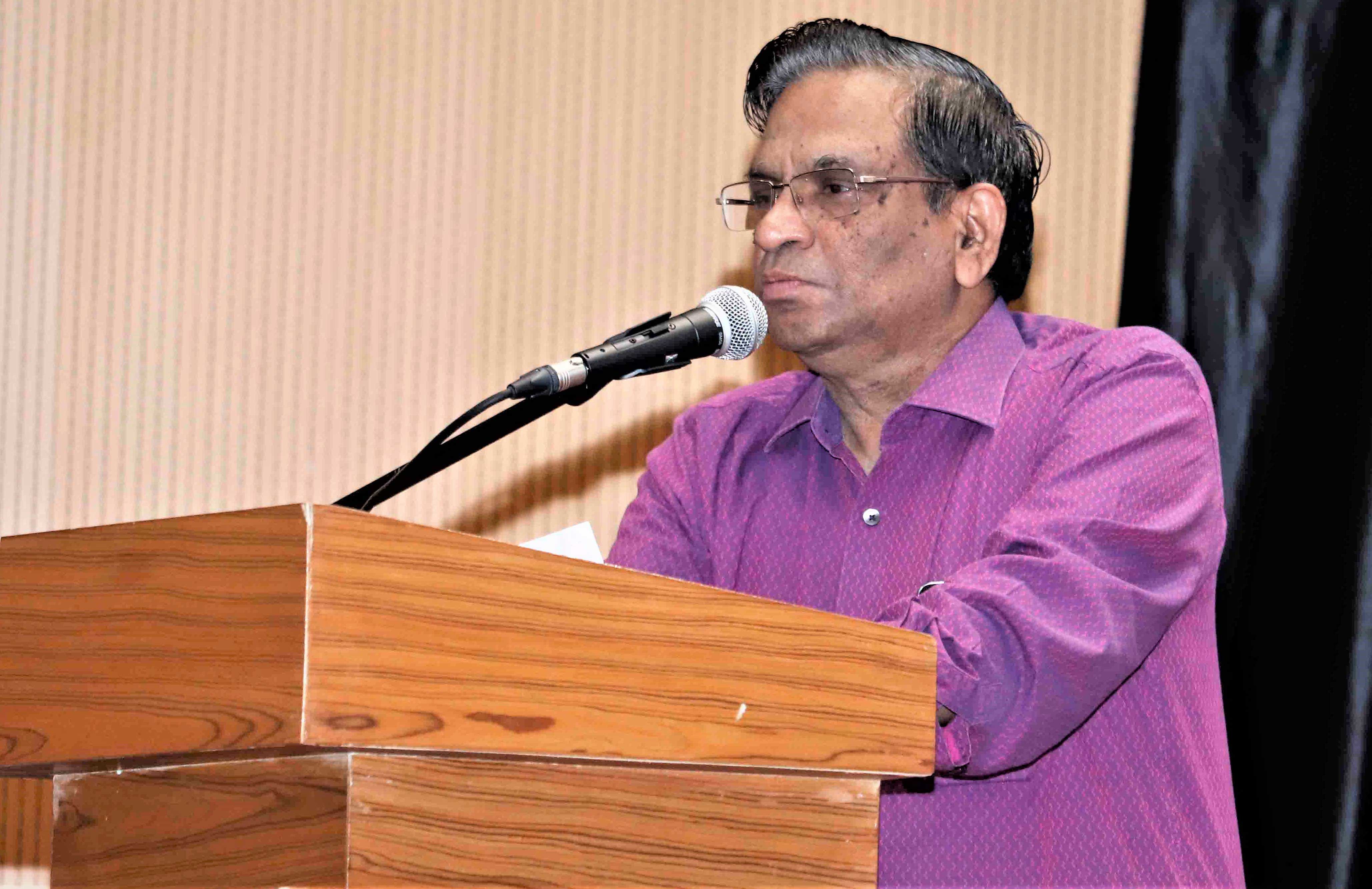 Dr. Rao took the centre stage to explain the significance of indulging in sports. He says, “The adherence to rules of sports trains one to be disciplined in their personal lives. Sports entails physical fitness which can be leveraged to improve the alertness of mind, further assisting the students to be able to work hard in the frontiers of academics,” Dr. Rao also trusts that team sports enable the youth to work together to achieve common goals by strategizing and executing plans in a given time frame. 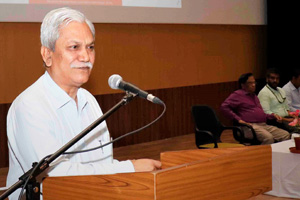 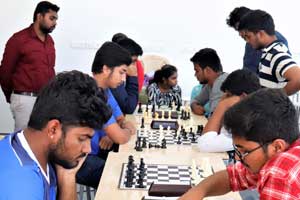 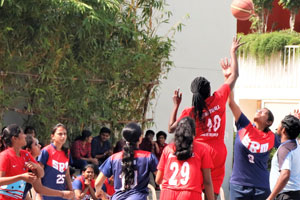 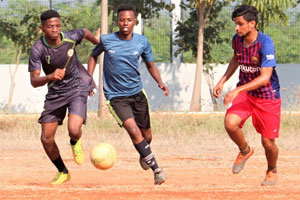 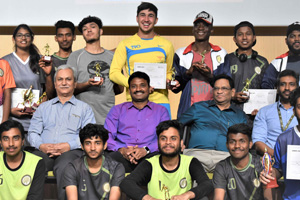 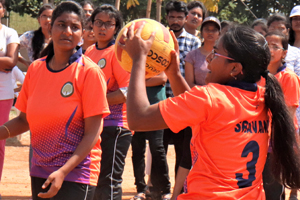 “A sound mind is in a sound body”

A famous Arabian Proverb says, “He who has health has hope and he who has hope has everything.” Comprising with that, the National Service Scheme Cell of SRM University-AP has taken a holistic initiative towards its students, staff and faculty by organising an eight-week “Yoga & Meditation Training Programme” in collaboration with the Heartfulness Institute, Hyderabad. The inaugural session was graced by the presence of Prof. D. Narayana Rao, Pro-Vice Chancellor; Dr. D. Gunasekaran, Registrar; Dr. A. Lakshmana Rao, Assistant Professor, Department of Commerce and NSS Coordinator; Dr. Venkata N Nori, Associate Professor, Department of Mechanical Engineering and in house yoga trainer for boys; Dr. Ajitha, Instructor, Department of Business Administration and in house trainer of yoga for girls. Sri N. L. V. Pandu Ranga Prasad, social worker and an associate of Shri Ram Chandra Mission, has honoured the university with his presence as a Chief Guest in this event. 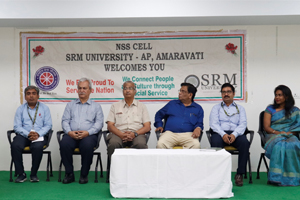 Eminent Dignitaries at the Inaugural Ceremony 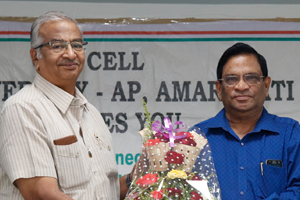 In his opening statement, Prof. D. Narayana Rao stated the benefits of yoga in a scientific way. He mentioned that it had been already proven by various research studies that regular practice of yoga and meditation enhances levels of a particular messenger molecule in brain which in result enhances brain activity. The enhanced brain activity makes a powerful impact on one’s personality development. It can be maintained very easily with one session of yoga per week.

In his spirited speech, Sri Prasad stated various usefulness of yoga and meditation in everyone’s life. He said, “Yoga helps one in self-realisation. It takes away the negativity and fills with positive energy. This helps people to concentrate on their life and goals.” He also spoke on how famous personalities like Ram Nath Kobind, P V Sindhu, Rohit Sharma were benefitted by yoga and meditation. He further said that it is an essential tool for every person which helps in regulating one’s mind, thoughts and behaviour. Yoga and meditation help in becoming a good citizen for the nation and for personal developments also. Mr. Prasad Speaking on the Importance of the Meditation Dr. Gunasekaran reminded that yoga is a great gift from our forefathers. He said, “Yoga was initiated in our country, yet we have neglected it for years. A man is made of many values and virtues, but he is not always aware of it. Meditation is the medium which helps one to identify oneself.” The Inaugural Ceremony ended with a brief meditation session led by Dr. Nori followed by the vote of thanks.

“Invention of technology is a result of teamwork”- Prof. M. Lakshmi Kantham On the eve of National Science Day, faculty, students, and staff of SRM AP assemble to celebrate the spirit of continued research and inventions which helps the world move forward. National Science Day is observed to acknowledge the discovery of Raman Effect by CV Raman in 1928. Aligned to the theme of 2020, “Women in Science”, Prof. M. Lakshmi Kantham, Distinguished professor at Institution of Chemical Technology, Mumbai graced the inaugural ceremony as the Guest of Honour. Dr. D. Narayana Rao, Pro Vice-Chancellor, Dr. D. Gunasekaran, Registrar, and Prof. Jayaseelan Murugaiyan, along with Dr. Lakshmi Sirisha Maganti, Conveners, also presided the ceremony.

The distinguished guests paid homage to Prof. CV Raman and revered on his endless contribution to the field of scientific applications. Dr. D. Narayana Rao, Pro Vice-Chancellor expressed his regards towards Prof. CV Raman by explaining the plethora of applications of Raman Effect. He says, “One needs to be passionate, committed, and confident like Prof. CV Raman to excel in any field. Science Day is observed to recognize the scientists’ contribution to society, to provide a platform to the young scientists and kindle their interest in science, to create awareness regarding the significance of science and its applications, to discuss issues, and to popularize the opportunities offered by science.” Prof. M. Lakshmi Kantham takes the dais to speak about women’s contribution to science. She remembered the great works of women who contributed to science and technology. She recalled Anandibai Gopalrao Joshi, the first woman physician, Anna Mani, Indian physicist, and meteorologist, Ashima Chatterjee, inventor of anti-malarial drugs, to name a few. She used this opportunity to spread awareness among young students to avail of the benefits of various fellowship programs offered by the government to female students. She also identifies that the challenges witnessed by our country can be solved by encouraging more female students along with males to indulge in research. In her words, “Invention of technology is a result of teamwork. Passion, perfection, and persistence are key to research whereas hard work and innovation lead to success”.

27 schools were invited to the campus of SRM AP. Young students from 8th and 9th standard flocked with their teachers to participate in various activities designed for them. The schools exhibited their science projects in groups. The students also participated in a science quiz, followed by oral presentation competition where they were to speak for two minutes on random topics. The winners were awarded gold and silver medals by Prof. Lakshmi Kantham to encourage the students to further excel in their careers and contribute to scientific research and innovations in the future. Women’s Day is celebrated across nations recognizing their contribution to every sphere. The day also aims at accelerating gender equality by empowering women. SRM University, Andhra Pradesh observes a week-long celebration that reached its orchestral height on Saturday. Upholding the spirit of equality, faculty, staff and students came together to participate in fun activities, games and competitions hosted throughout the week. This included spoon and lemon race, tug of war, bucket and ball, musical chair, singing competition, dancing competition, Mathematics contest- Ms. Hypatia, and essay competition. Everyone in the campus observed 7th March as an Ethnic Day by draping themselves in traditional wear, enunciating the beauty of the occasion. Lamp lighting by the Chief Guest

With grand exuberance, SRM AP welcomed the Chief Guest, Smt. B. Vijayakeerthi, IRSE, Divisional Engineer, South-Central Railway, Guntur. She initiated the celebration by lighting the ceremonial lamp, along with Prof. D. Narayana Rao, Pro VC, Dr. B. Sivakumar, Deputy Registrar, Ms. Revathi Balakrishnan, Convener, and a student. Breaking gender biased roles, Smt. B. Vijayakeerthi pursued a career in Civil Engineering. A student of IIT Madras, she later aced Indian Railways Service of Engineers examinations and joined Indian Railways. She recalls, “From the day I chose Civil Engineering, I was questioned by society as the norm was that women avoided taking up engineering domains that involved field-work. However, irrespective of my gender, I persuaded my dream and challenged myself to excel against all odds. Initially, although encouragement was rarely found, persistence and hard work ensured that support started pouring in from all ends.” Smt. B. Vijayakeerthi addressing the audience

Smt. B. Vijayakeerthi set a record by improving the railway track parameters from 96 to 130, and her phenomenal work of eliminating 10 unmanned level crossing gates within a period of 6 months, brought her immense recognition. Persuading young students to follow their dreams, she says “Career choices are solely personal, and it does not depend on gender. One should have the confidence to aim big, and also to take a leap towards achieving the dream.”

The winners of the competitions hosted as a part of women’s day celebration, were honoured by the Chief Guest. The spectacle concluded with the students giving out a social message through cultural program – a skit, song, and dance performance. Their acts demonstrated the societal challenges faced by women and the necessity of bringing about a change to empower them.