Tax Policies and Inconsistencies: Complexity of the GST Act

Tax Policies and Inconsistencies: Complexity of the GST Act 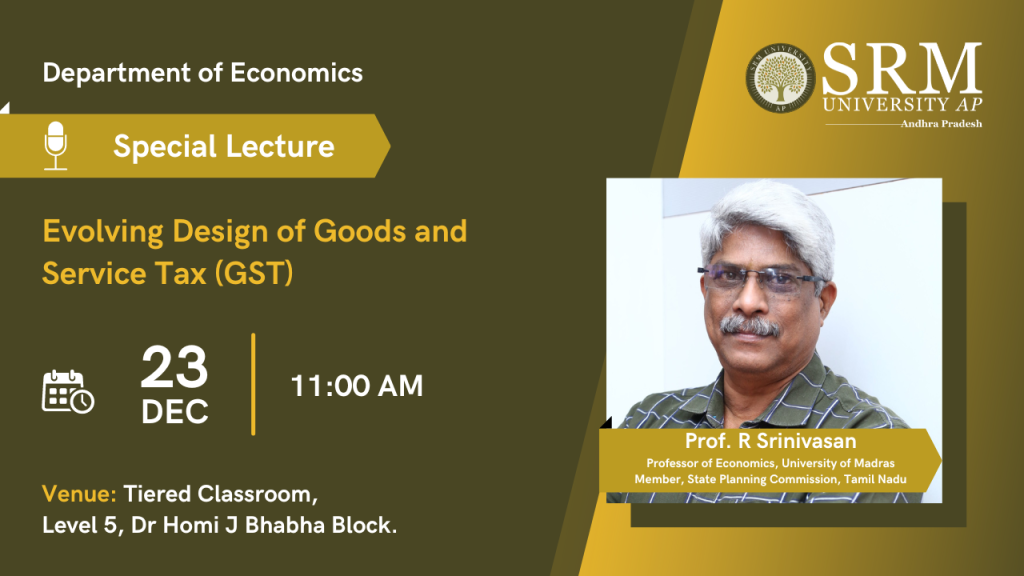 The Department of Economics is organising a special lecture by Prof. R Srinivas on December 23, 2022. The lecture on “Evolving Design of Goods and Services Tax” will highlight the inconsistent buoyancy of the GST tax implemented in India. The Goods and Services Tax was introduced as a harmonised tax system for the taxation of commodities in India in June 2017, covering more than 60% of the commodity transactions in the country. Union and state governments have been concurrently levying this tax and administering it. There are no differences in tax rates, tax bases and administration processes across India. Prof. Srinivas will elucidate why the adopted tax system remains complex and yet to be wholly efficient.

The effort to harmonise commodity taxation in India started in 1993 at a conference of state finance ministers resolving to move towards a non-distorting Value Added Tax (VAT) system in India. The earlier arrangement of the levy of Excise Duty on production by the Union government and the levy of sales tax on transactions by the state governments created a complex, economically distorting and non-buoyant tax system. With the adoption of VAT, the existing problem was thought to be resolved.

Though all the states adopted VAT in 2006, the distorting tax system prevailed with differences in tax rates, tax bases and the continuance of old sales tax on inter-state tax. The Union and state governments formed an empowered committee on commodity taxation in the late 1990s, and since then negotiations went on to culminate in the implementation of GST in June 2017.

Though the GST is supposed to be buoyant, it is not consistently buoyant to be considered a reliable source of revenue. The two major commodities, petroleum products and liquor are outside the GST. This continues to distort the commodity tax system. The creation of the GST council to resolve conflicts between states and between union and state governments on issues relating to GST is also seen as another source of political friction by the states who have given up a substantial portion of their tax powers. In terms of tax administration, smaller firms face unsurmountable difficulties in adhering to the regulations of the GST act in terms of filing tax returns and getting refunds of tax credits.

Therefore, with several conflicts remaining unresolved the GST as a system of commodity taxation is still evolving and has yet to reach a level of maturity and stability.

Prof R Srinivasan has a keen interest and research focus in Public Finance and Tamil Nadu Economy. He has exclusively written articles in Journals and Print media in English and Tamil and has publications in national and internationally acclaimed journals. He is also a member of various committees and boards.

Join the lecture to witness a dissection of the economic anatomy of India!