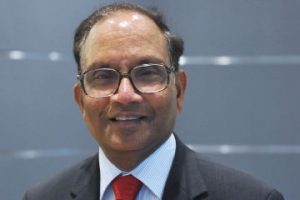 As a part of his academic career, he worked at the Indian Institute of Technology (IIT), Madras; the National University of Singapore (NUS) and the Nanyang Technological University (NTU), Singapore, in different capacities at different times with the ultimate one being the Professorship at both NUS and NTU. Currently he is the Director, NTU – India Connect, a special initiative of NTU, Singapore, to connect NTU with the Indian Universities and Institutes of Higher Learning in India through variety of actions.

Prof. Chowdari was conferred the titles of the “Officer in the Order of Academic Palms” by the French Government and the “Business Event Ambassador” by the Government of Singapore. He received the “Outstanding Science Entrepreneur” award given by NUS. He is the Honorary Fellow of the Andhra Pradesh Academy of Sciences, elected-member of the “ICSU Regional Committee for Asia and the Pacific”, Academician and Vice-President of the “Asia Pacific Academy of Materials” and the Honorary Advisor to the Government of Andhra Pradesh, India. He is the recipient of the “Lifetime Achievement Award” from the Andhra Pradesh Academy of Sciences.

He has served as the President of the “International Union of Materials Research Societies (IUMRS)” and the “Asian Society for Solid State Ionics”, and Chairman of the 15th Asian Physics Olympiad (APhO 2014). Currently he is the President of the Materials Research Society of Singapore and Chairman of the International Conference on Materials for Advanced Technologies (ICMAT) series which is going to the 10th edition. He has also initiated series of conferences named “IUMRS – International Conference of Young Researchers on Advanced Materials (ICYRAM)” and “Trilateral Conference on Nanoscience – Energy, Water and Healthcare” bringing the materials scientists from China, India and Singapore together.

His research interests lie in the development of electrode and electrolyte materials for energy storage applications including Lithium Ion Batteries. He has published about 300 papers and trained more than 20 students for Ph.D degree. He has ~19,000 citations with h-index of 71. He is on the Editorial Board of a number of international journals.

His current administrative responsibilities include fostering research collaborations between NTU Singapore and the Indian Universities and Institutes of Higher Learning through research internships, student and faculty exchanges, joint symposia and joint Ph.D programs. He is a member of the Board of Management of SRM University, AP – Amaravati, India; Vel Tech University, Chennai; India, and the Vignan University, Guntur, India. He is also a Member of the Board of Governors of the Viswakarma University, Pune, India. He has the honor of being the Chief Guest at the Convocations of the K L University and the University of Mysore and at the number of national and international conferences.