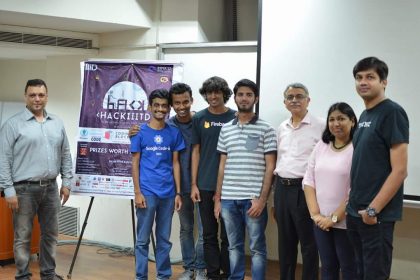 Two students from SRM University, Andhra Pradesh namely Rishabh Minocha and Shubham Rao attended an annual hackathon HACKIIITD, organized by IIIT-Delhi on the 25th of August. They emerged as the winners (1st Position) of the hackathon out of the 800 teams who had applied.

The teams were provided a set of themes out of which they could choose any to work on. Team Bash, which included Rishabh Minocha and Shubham Rao chose to work on “Reliability of Media”. Using the concept of Blockchain, a decentralized peer to peer anonymous network, the team worked on the theme by creating an application where users could vote on a particular article. Based on the consensus amongst the users, a piece of news would then be classified as reliable or not. If the news reaches the consensus, the users who up-voted the particular news would get a small amount of cryptocurrency (Ex. Bitcoin) for their research on that news.

The point of using the concept of Blockchain was so that if a particular news reaches the consensus, it could not be modified in any matter and hence the public would get the original piece of news.