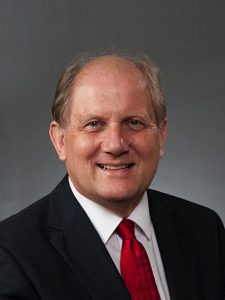 Prof Bertil Andersson is a world-renowned plant biochemist from Sweden with a longstanding association with the Nobel Foundation that includes chairing its chemistry committee, he has pioneered research on the artificial leaf, a promising area of sustainable energy research that uses sunlight to produce clean, low-cost sources of energy. Prof Andersson has authored more than 300 papers in basic photosynthesis covering topics from photosystem structure to biological membranes and light stress in plants, with more than 14,000 citations.

Prof Andersson became NTU's Provost in 2007, where he strengthened the university's profile as one of the fastest-growing research-intensive universities in the world with a track record of winning competitive research grants and attracting world-acclaimed scientists. Today, NTU is the world's fastest-rising young university and also ranked first among the world's best young universities. In the QS World University Rankings 2018, NTU is placed 11th globally and number 1 in Asia. NTU also leads the top Asian universities in normalised research citation impact which is a major academic quality measure for research.

Prof Andersson was installed as NTU's third President on 1 July 2011 after being the university’s Provost from 2007. He was formerly President of Linköping University, Sweden, from 1999 to 2003, the Chief Executive of the European Science Foundation from 2004 to 2007, and the Chairman of the Nobel Committee for Chemistry in 1997. As the man at the helm of the European Science Foundation in Strasbourg, France, his last post before joining NTU, Prof Andersson consolidated research efforts across 30 European countries.

Prof Andersson stepped down from his position as President of NTU on the 31st of December 2017. He will continue to be involved in governance and advising private and public organisations and business.

Prof Andersson was appointed NTU's first Provost in April 2007 following a rigorous selection process that included a review of distinguished candidates from around the world. He accepted the position at NTU following a visit to the university in 2006 as a member of the Scientific Advisory Board of the National Research Foundation, set up by former Deputy Prime Minister Dr Tony Tan in 2006 to advise the Singapore government on its R&D strategy.

As the university's senior academic officer, Prof Andersson has been instrumental in helping to redefine education, research, administration and the campus environment with universitywide reforms in line with best international practices.

In domains such as sustainability, healthcare, new media and innovation, he spearheaded institutional changes that led to bold new programmes as well as increased funding support and high-quality partnerships. NTU's next five-year plan will see the university consolidating its strengths in spheres beyond sustainability and healthcare, such as in security, future learning and research on Asia.

Faculty development at NTU has been boosted with the university's flagship Nanyang Assistant Professorship attracting a new generation of promising educators and researchers.This is today one of the most rigorous young scientist schemes in the world, and demonstrates the attractiveness of NTU as a place for young researchers to make their way from some of the best universities in the world.

By fostering dialogue among colleges and schools, Prof Andersson has also helped to promote greater interdisciplinarity on campus, necessary to better address urgent challenges that will require expertise on many fronts. Under an ambitious campus master plan, the university landscape and infrastructure is being transformed to encourage faculty and students of different disciplines to come together to create new knowledge.

In the international arena, Prof Andersson has expanded NTU's engagement with a host of leading institutions and companies, laying the groundwork for future collaborations. For example, he catalysed the development of joint programmes and the setting up of joint laboratories on campus with top MNCs that have brought innovations to the fast-growing Asian technology market.

A Visiting Professor and Fellow of Imperial College London, Prof Andersson has been the key driver of Singapore's medical school jointly established by NTU and Imperial College London. The school received philanthropic support of S$400 million, inclusive of enhanced government matching, within months of its establishment in Singapore and was named the Lee Kong Chian School of Medicine. It enrolled its first batch of students in August 2013, and has a campus in Novena, Singapore's medical district.

In 2016, Prof Andersson was elected a Fellow of the Singapore National Academy of Science for his distinguished contributions to the development of science in Singapore and for leading NTU to global distinction. Later, he was awarded the Singapore President's Science and Technology Medal, the highest national honour for lifetime achievement given to individuals including top scientists and engineers who have made exceptional contributions to the development of Singapore.

In 2017, he was conferred Singapore's Meritorious Service Medal for his exceptional leadership and service to NTU, and for his contributions to the nation. He was the first European recipient of this honour in 10 years.

On the international front he was awarded the Wilhelm Exner Medal in Vienna (2010) for shaping the world through science, a prize frequently given to Nobel Prize winners plus several Swedish high-level awards.

He is a research adviser to the Swedish government and was previously Vice President of the European Research Advisory Board of the European Commission in Brussels. He has also been an adviser to business activities in the biotechnology and pharmaceuticals private sector. He is an advisor to the Wallenberg Foundation in Stockholm and on the Board of Perrett Laver in London.

In Singapore, he has also served on the Governing Board of the Singapore Centre for Environmental Life Sciences Engineering, and was a Board member of A*STAR Singapore, the government agency in charge of national scientific research and development as well as the Building & Construction Authority.