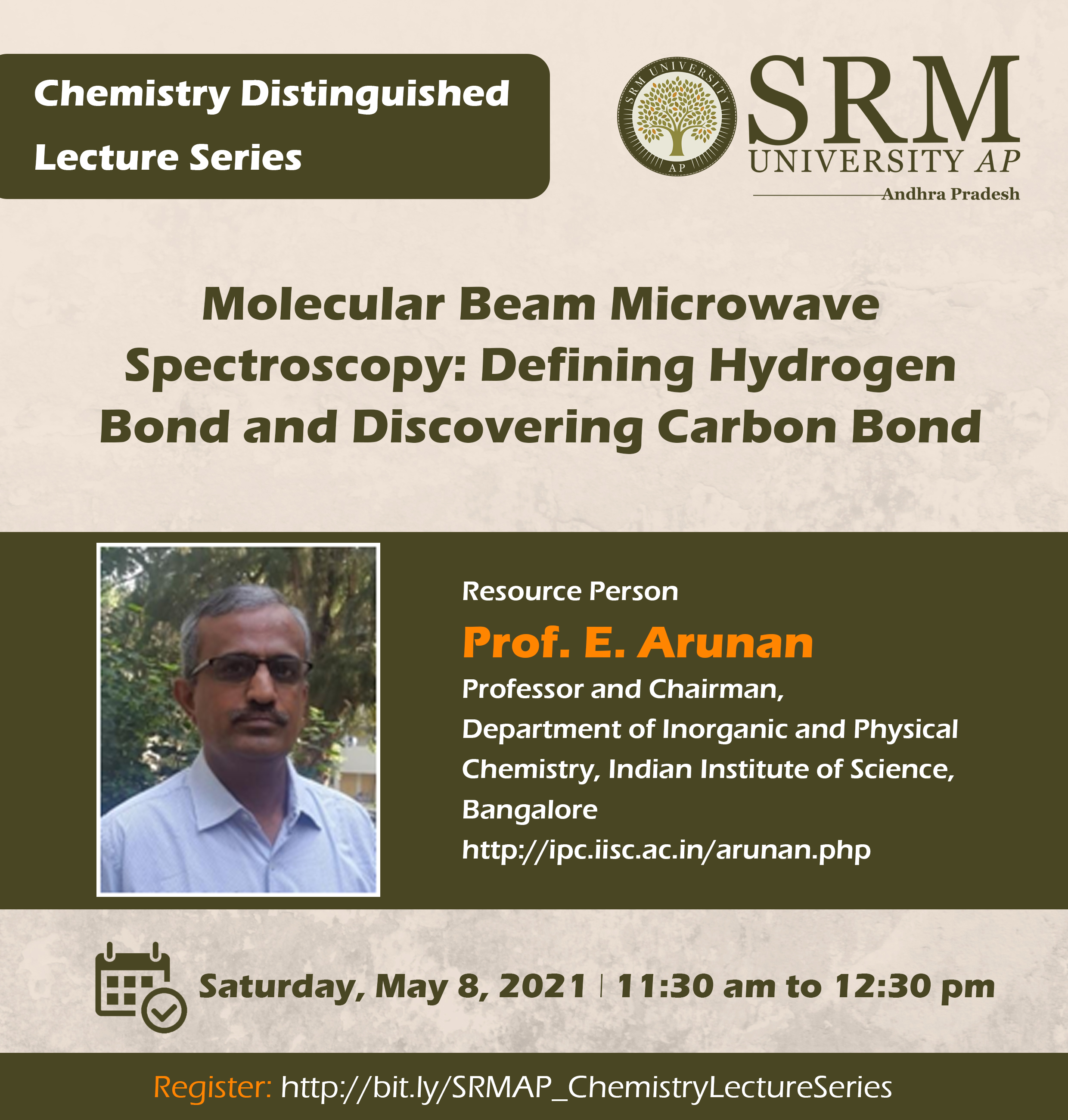 The Chemistry Distinguished Lectures series starts its voyage towards transcendental knowledge with an exciting discussion on “Molecular Beam Microwave Spectroscopy: Defining Hydrogen Bond and Discovering Carbon Bond” on May 8, 2021, at 11.30 am. Renowned scientist and Professor E Arunan from the Department of Inorganic and Physical Chemistry, Indian Institute of Science (IISc), Bangalore, will join the webinar as the Keynote Speaker.

Professor Arunan has extensive research experience in the field of Chemical Sciences and is long associated with IISc, Bangalore, one of the premier institutes of India. Dr Arunan pursued his undergraduate studies at The American College, Madurai, followed by two masters from IIT Madras and IIT Delhi. He obtained his doctoral degree from Kansas State University, USA. Prior to becoming an academician, he worked as a Post-Doctoral Scholar at the University of Illinois at Urbana-Champaign. Prof Arunan started his career as an Assistant Professor at the Department of Chemistry, IIT-Kanpur in 1995. He later moved to the Department of Inorganic and Physical Chemistry, IISc, Bangalore and became a Professor in 2009 and Chairman in 2018.

Prof Arunan’s research interests include experimental physical chemistry, molecular and van der Waals spectroscopy, chemical kinetics and dynamics, hydrogen bonding and other intermolecular bonds/interactions, shock wave interactions with molecules and materials, astrophysics/astrochemistry. He has published around 100 papers in peer-reviewed international Journals, 14 in International Conference Proceedings, 8 in Resonance, the Journal of Education and 16 in Current Science, published by the Indian Academy of Sciences. The celebrated personality has given numerous plenary, keynote and invited lectures all over India and many countries in the world, including the USA, UK, France, Germany, Italy, Poland, Spain, Portugal, Hungary, Finland, Russia, Australia, Czech Republic, China, Pakistan, Bangladesh, Singapore and South Korea. He has delivered inspiring talks at most of the premier institutes in India and also in colleges and high schools all over India.

Prof Arunan is a Fellow of International Union of Pure and Applied Chemistry, Indian Academy of Sciences and a member of the International Advisory Board for ‘Horizons in Hydrogen Bond Research” Conference 2011, International Advisory Board for the Asian Spectroscopy Conference 2009-2013, Programme Advisory Committee on Physical Chemistry, Department of Science and Technology 2008-2012, International Advisory Editorial Board for Physical Chemistry Chemical Physics, Royal Society Publication, From 2005 and many other organisations and advisory boards. Further, he is serving the scientific community as the Section Editor (Chemistry) for Current Science from 2018, Associate Editor from 2013, Associate Editor for Journal of Chemical Sciences from 2012-2016.

Chemistry enthusiasts are encouraged to join the webinar to learn more on the Molecular Beam Microwave Spectroscopy from the expert himself on May 8, 2021, at 11.30 am.