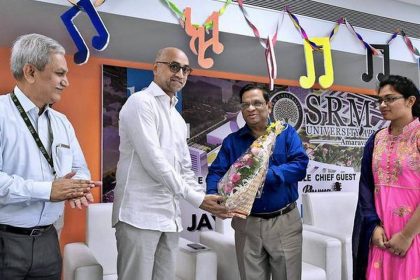 Guntur MP Jayadev Galla exhorted the youth to figure out what they plan to do at least in the next two decades to position themselves accordingly now itself and to be prepared to enter the real world from the comfort of their homes where their parents would not be around to take care of them.

“The transition from school to college and then to actual career-building will not be as fair, nice and safe as you might expect, particularly at a time when the world is rapidly moving towards a greater degree of automation with each passing day. You should quickly adapt to the changing times in order to match up to the tasks”, he asserted.

Participating as chief guest in the inaugural function of SRM University-A.P.’s 1st Cultural Fest-2018 on its premises here on Thursday, Mr. Jayadev emphasised on the need to have a long-term vision for their future. Career options at hand should be evaluated from time to time to make the necessary course corrections, Mr. Jayadev said.

Nevertheless, planning should start at the early stages so as to seize the opportunities as and when they come, Mr. Jayadev said and insisted that the youngsters should keep learning to be productively engaged with society.

Mr. Jayadev narrated how he moved from a course in chemical engineering and then electrical and to political science, all in the United States of America where his parents shifted to when he was aged four, and a challenging role he donned in Amara Raja Batteries and the way he learnt the intricacies of politics, in which he got to make his mark of 42 years of work experience.

SRM University A.P. Pro Vice-Chancellor D. Narayana Rao said the university was gearing up to expand its reach to 25,000 students in a decade and that it concentrated on research, which was a big differentiator between his institution and the State-funded universities. He thanked the Chief Minister N. Chandrababu Naidu for extending an invitation to the SRM University to set up its campus in Amaravati and took pride in the fact that its construction was completed in barely six months.