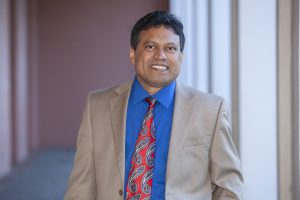 Prasant has an impressive record of accomplishments and leadership. He’s developed partnerships and fellowships for our graduate students and worked with undergraduate students on multidisciplinary research. His experience in obtaining large collaborative awards and thinking innovatively about fundraising will be critical to building our momentum in the years ahead.

Other leadership positions Mohapatra has held at UC Davis include associate chancellor (where he focused primarily on strategic planning for new initiatives and programs), interim vice-provost and chief information officer, and chair of the computer science department. He held the first Tim Bucher Family Endowed Chair in the Department of Computer Science from 2009-2013 and has remained a professor in the computer science department.

In addition, Mohapatra led a National Science Foundation-funded project for mentoring underrepresented undergraduate students. He is the principal investigator of an NSF grant for “Bridge to Doctorate,” an initiative to facilitate and train underrepresented minority groups to pursue doctorate studies in STEM areas. He has received funding from the Mellon Foundation to explore the transformation of the graduate admission process for the holistic evaluation to increase graduate student diversity.

Currently, Mohapatra has 7 patents and has published about 350 research papers and has been cited more than 12,000 times. He has received several best paper awards and has delivered distinguished lectures all over the world. He has graduated 33 doctoral degree students and 25 master’s degree students. Mohapatra is a fellow of the American Association for the Advancement of Science and an elected fellow of IEEE, the world largest professional organization dedicated to advancing technology.

Dr. Mohapatra received an Outstanding Research Faculty Award from the College of Engineering at the University of California, Davis. He received the HP Labs Innovation awards in 2011, 2012, and 2013. He is a Fellow of the IEEE and a Fellow of AAAS.

Dr. Mohapatra’s research interests are in the areas of wireless networks, mobile communications, cybersecurity, and Internet protocols. He has published more than 300 papers in reputed conferences and journals on these topics. Dr. Mohapatra’s research has been funded through grants from the National Science Foundation, US Department of Defense, Army Research Labs, Intel Corporation, Siemens, Panasonic Technologies, Hewlett Packard, Raytheon, Huawei Technologies, and EMC Corporation.

Dr. Mohapatra has consulted for many companies and organizations in USA, Australia, Korea, Ireland, and India. He has also served as an expert witness in various patent infringement and invalidation litigations.