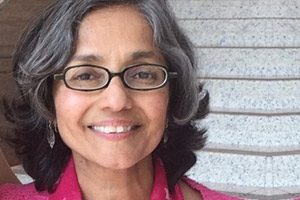 Rajini Srikanth is Dean of the Honors College and Professor of English at the University of Massachusetts Boston. She is also an affiliated faculty member in the Human Rights program, the Asian American Studies Program, and the graduate program in Transnational Cultural and Community Studies. Her research and teaching interests span American Literature (including multiethnic American writing), literature and human rights, critical race and diaspora studies, literature and the political imagination, and post-apartheid South Africa. Her publications include the award-winning book The World Next Door: South Asian American Literature and the Idea of America (2004), the book Constructing the Enemy: Empathy/Antipathy in US Literature and Law (2012), the co-edited collections Interdisciplinary Approaches to Human Rights: History, Politics, Practice (2018), The Cambridge History of Asian American Literature (2016), Bold Words: A Century of Asian American Writing (2000), A Part, Yet Apart: South Asians in Asian America (1998), and Contours of the Heart: South Asians Map North America (1996). She has also co-edited special issues of the journals International Feminist Journal of Politics (Vol. 10.4, December 2008) on Islamic feminisms, and Asian American Literary Review (Vol 2 No. 1.5, Fall 2011) commemorating the 10th anniversary of September 11, 2001. In addition, she has published numerous essays and book chapters. She has secured grants from the Ford Foundation and the National Endowment for the Humanities.

As Dean of the Honors College, she champions an interdisciplinary curriculum that spans the humanities, natural sciences, and social sciences, and a pedagogical approach that values research, interactive discussion, and a global perspective. As Professor of English, she brings literary texts into conversation with history, politics, anthropology, and economics.