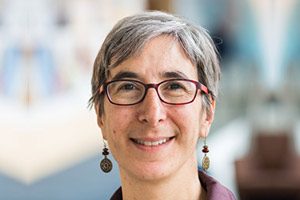 Lynn Andrea Stein is Professor of Computer and Cognitive Science at Olin College of Engineering.  Following a decade as an MIT EECS professor, Stein joined Olin College’s founding faculty in 2000, co-creating innovative curricula and a college-wide laboratory for educational innovation.  From 2009-2016, she led Olin’s efforts to collaboratively transform higher education in America and throughout the world, inaugurating the positions of Associate Dean for External Engagement and Initiatives and Director of Olin’s Collaboratory.  From 2016-2017, Stein was Special Advisor to the Provost; in 2017-2018, she served as an American Council of Education (ACE) Fellow in the Office of the President at Dartmouth College.  Stein has received the National Science Foundation Young Investigator Award, a Mary Ingraham Bunting Fellowship, the Helen Plants Award of the American Society for Engineering Education, as well as several teaching awards.  She has served on the Executive Council of Association for the Advancement of Artificial Intelligence, in leadership roles in the Association for Computing Machinery, and in various leadership and advocacy positions as a woman in computing.  Stein's research focuses on the role that interaction plays in both computational and cognitive processes. Her projects have included the construction of an artificial humanoid and an intelligent room, philosophical and pragmatic work from knowledge representation to the semantics of cognition, and co-authorship of foundational documents for the semantic web.  Over the past three decades, Stein has also led innovations in computing and engineering curricula including pioneering educational applications of inexpensive robotics, an innovative curriculum for introductory computer science, and an award-winning interdisciplinary, cross-generational design immersion.  As an international advocate for student-centered education and inclusive environments, Stein builds systems and programs for transformation, runs workshops to stimulate curricular creativity, consults with a wide range of US and international institutions, serves on curricular advisory boards, speaks frequently at educational conferences, and embeds in sites to create constructive change.