School of Engineering And Sciences 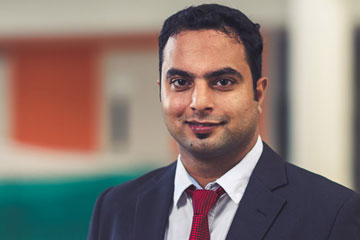 Dr Tousif Khan N, Head of the Department, Electrical and Electronics Engineering at SRM University-AP, Andhra Pradesh has been elected as a Joint Secretary (2020-2023) of the prestigious Automatic Control and Dynamic Optimization Society (ACDOS), Indian national member organization of International Federation of Automatic Control (IFAC). The objective of ACDOS is to promote automatic control and dynamic optimization fields in academia and industry across India. The society aims to host international conferences and technical workshops regularly in order to promote close interaction between industry professionals and academia. The society also participates in curriculum development for graduate and under-graduate studies in addition to facilitating productive research in this area. The society volunteers to honour eminent persons who excelled in this field in industry and academic circles.

Dr Tousif Khan N is an Assistant Professor in the Department of Electronics and Electrical Engineering at SRM University-AP, Andhra Pradesh. He has obtained his PhD from Indian Institute of Technology, Guwahati. Apart from performing his duties as a teacher, he is pursuing his research career in Control systems, Power Electronics and Optimization Techniques. The very young and talented professor has been honoured with several awards and recognitions for his pursuits in the domains of Teaching and Research. As a Joint Secretary of ACDOS, Dr Khan wishes to contribute further to the versatile worlds of Research and Academia.

To know more about ACDOS, please click the link: https://www.acdos.org/

Dr Somesh Vinayak Tewari, Assistant Professor, Department of Electronics and Electrical Engineering, brings another honour for SRM University-AP. He has been selected for Mentoring of Engineering Teachers by INAE (Indian National Academy of Engineering) Fellowship -2020. His mentor during the programme will be Dr Archana Sharma, FIE, FNAE, Outstanding Scientist, Bhabha Atomic Research Centre.

The INAE (Indian National Academy of Engineering) provides funding to an Engineering Teacher for carrying out research in the selected/proposed area to be mentored by an INAE fellow. The scheme attempts to increase the knowledge base and is instrumental in building long term collaborations. Such mentoring program helps in bridging the collaboration between an academic area and a research and development organization which is extremely necessary to sow the seeds of research in young and energetic brains so that they are able to translate their research ideas for further growth. This interaction of ideas leads to a win-win situation for both the University and the research organization. The prestigious and highly competitive fellowship receives thousands of applications nationwide though only fifteen of them finally are selected for the fellowship this year by INAE. Dr Somesh is one of fifteen outstanding researchers.

Dr Tiwari will be working on the proposed research topic- “Studies on Inertial Electrostatic Confinement Concept in Deuterium gas environment”. Inertial Electrostatic Confinement (IEC) is an alternative concept to Magnetic and Inertial fusion. IEC fusion device is an extremely compact and simple device, running by high voltage as discharge on Deuterium -Deuterium/Deuterium-Tritium/Deuterium -3He fuel gases. Studies related to IEC find application in the areas of dosimeter calibration, isotope production, radiography, and has medical applications. Such a research is multifaceted and helps an engineering teacher to enhance his skills in experimental areas of high voltage, plasma physics, vacuum techniques, radiation detection and measurement and in numerical methods and simulation leading to a comprehensive analysis of a given problem. During the two months of the fellowship, Dr Archana Sharma will be mentoring the project. It is an excellent opportunity for our faculty to work with such a renowned scientist in such close proximity. The collaboration will be beneficial for both institutions. 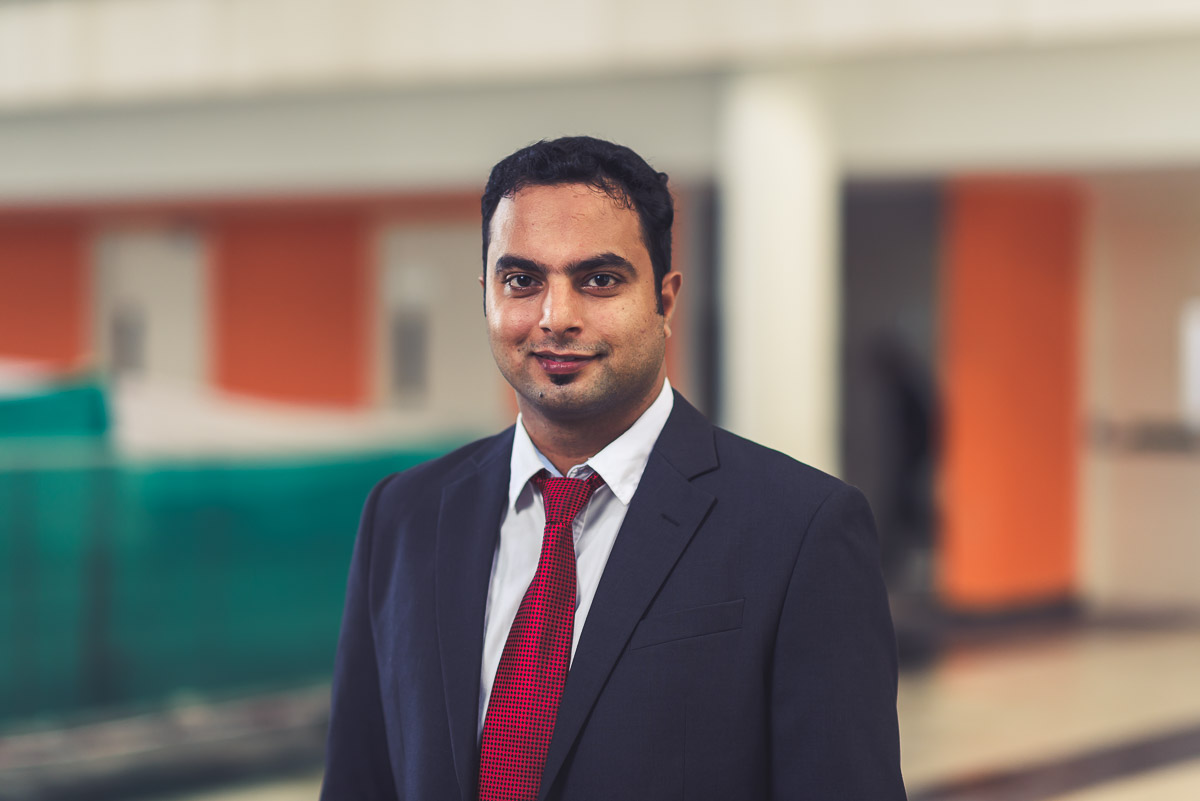 The research work of Dr. Tousif proposes a novel Laguerre neural network estimation technique for the approximation of unknown and uncertain load function, followed by its subsequent compensation in the adaptive backstepping controller. A detailed design of the proposed estimator and adaptive backstepping controller along with closed loop asymptotic stability have been presented. Further, the proposed control mechanism is evaluated through extensive numerical simulations while subjecting the converter to input voltage, reference voltage, and load resistance perturbations. Furthermore, the results are verified by testing the proposed controller on a laboratory prototype with DSP based TM320F240 controller board. The analysis of results reveals that the proposed control methodology for DC-DC step down converter offers a faster transient output voltage tracking with smooth and satisfactory inductor current response over a wide operating range. Dr. Tousif informs, “Under the class of DC-DC converters, the dynamics of DC-DC step down converter are nonlinear in nature and are largely influenced by both parametric and unanticipated external perturbations. In its closed loop operation, obtaining a precise output voltage tracking besides satisfactorily inductor current response is a challenging control objective. Hence, in this regard, this article proposes a solution.”

Electric power supply is the principal entity behind any electrical circuits and systems. Irrespective of their function in the digital domain, these circuits necessarily require a reliable and efficient energy source for their operations. Among the two existing forms of electrical energy, namely, the direct current (DC) and the alternating current (AC), the DC power finds wide use in numerous applications in the field of telecommunication, instrumentation, medical electronics, aerospace, defence and power transmission.

Ever since the fundamental innovations in DC systems by Thomas Alva Edison in 1880, DC rectification, and modulation method have remained central to various utilities. During the initial years, DC power conversion primarily resorted to the use of vacuum tube technology in delivering a desirable level of voltage from an AC source. The rectification stage was subsequently followed by filtering of the voltage at the output end. Nonetheless, the vacuum tube technology supported very low current density and featured a high ripple content in the DC voltage. Additionally, the output voltage was inconsistent or rather unregulated, making it inappropriate for DC power operated electrical and electronic systems. Much later in 1967, integrated series regulators were developed which eventually became popular as linear power supplies (LPS). Such a classical DC power generation method involved an AC transformer, AC-DC rectifier, and a voltage regulator in its assembly. The transistors in LPS operate under active region and dissipate large amounts of heat due to the voltage drop while high current flows through the collector-emitter junction, thereby causing substantial power loss and a very low energy efficiency. Even though they characterize the low level of noise and find better suitability in audio applications, yet their critical limitations of huge size, heavy weight and high cost make them infeasible for use in portable electronic devices.

In tandem to these aforementioned developments, the advancements in power semiconductor technology led to the invention of low cost reliable power switches exhibiting fast switching response. This proved to be instrumental in building an energy efficient switched mode power supply which gradually gained popularity. “Its impact on electrical technology was phenomenal, replacing conventional linear voltage supplies with switched mode power supplies giving rise to enhanced efficiency, light weight, compactness, and comparably lower cost. Such a modern DC conversion system primarily includes DC-DC converters, wherein the rectified input voltage is fed to the DC-DC converter circuits for obtaining specific voltage levels. The primary objective in DC-DC converters is to transfer the energy among different DC circuits functioning at a specific voltage and current levels. This process of energy transfer is performed by temporarily storing the energy from the input source in an operating mode, followed by releasing it in the other operational mode of the converter. Thus, one level of DC input voltage is converted to another level of average DC output voltage at the load end. Meanwhile, the converter being ideal is expected to consume no energy. Any consumption of energy in the converter interface amounts to direct power loss in the overall supply system. Typically, converters render high input-output conversion.”, enlightens Dr. Tousif Khan N. His notable research work offers to mitigate these issues, leading to the venerated APJ Abdul Kalam Memorial International Travel Award. Advancing his work in the future, Dr. Tousif will be closely working on the society’s activities with ACDOS as a member for mutual benefit.