Engagements in Other Universities

Know your style of writing 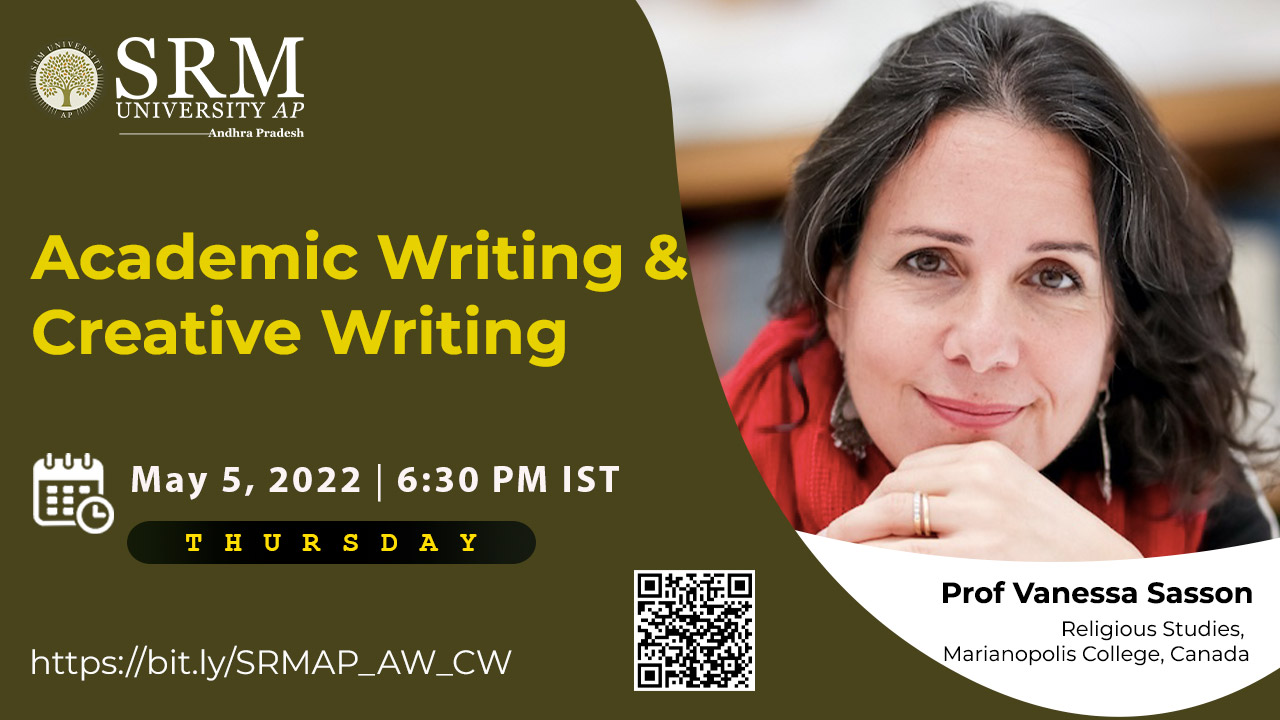 The art of writing can be branched out into different types depending upon the purpose of each piece of writing. You might have come across varied styles of writing such as creative writing, academic writing, technical writing and many more. Have you ever tried to deduce the difference between all these writing styles? Well, we offer you an informative session that will help you gather a better understanding of different styles of writing.

The Department of English has scheduled a webinar on the topic “Academic Writing & Creative Writing” under the theme “Language and Society” with Prof Vanessa Sasson as the keynote speaker.

Academic writing and creative writing seem to be pulling the act of writing and the writers in two different directions. A lot of writers, especially aspiring writers, tend to think of both genres as catering to very different audiences and fulfilling very different needs in very different contexts. Does that mean you can be only one and not the other? Do you have to choose? And how do you decide what to commit to? In this talk, Prof Vanessa Sasson will share her experience of writing in both capacities and discuss the joys and challenges of both.

Vanessa R Sasson is a professor of Religious Studies in the Liberal Arts Department of Marianopolis College where she has been teaching since 1999. She is also a Research Fellow at the University of the Free State and a Research Member for CERIAS at UQAM. She has published widely as a scholar, with a number of academic books to her credit. Her most recent book was published by the University of Hawaii Press (2021) and is entitled, Jewels, Jewelry, and Other Shiny Things in the Buddhist Imaginary. Yasodhara and the Buddha (Bloomsbury, 2021) is her first novel. She is currently completing the sequel.

Join the Webinar to master the art of writing!

Programmed sadness in the desire for connections and recognition 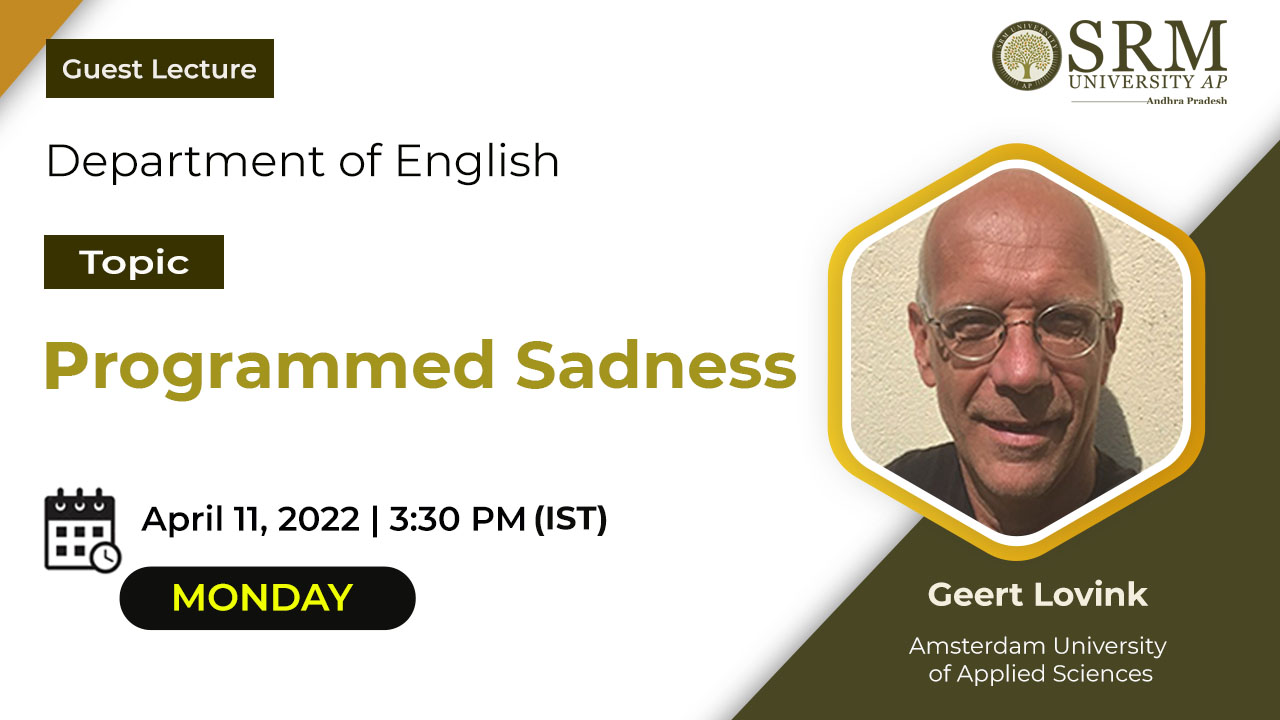 “Social media reality may be seen as a magical realm where we belong. That’s where the tribes gather, and that’s the place to be – on top of the world. Social relations in “real life” have lost their importance”– David Brooks

Technological sadness has become the default mental state of the online billions. The Department of English at SRM University-AP organises a guest lecture titled “Programmed Sadness” on April 11, 2022, to discuss the emotional analytics of network cultures. Prof Geert Lovink, Amsterdam University of Applied Sciences, will engage the participants at 3.30 pm on that day.

What happens when nothing can motivate you anymore, when all the self-optimisation techniques fail, and you begin to carefully avoid these forms of emotional analytics? Compared to others, your ranking is low – and this makes you sad. In this presentation, Dutch media theorist, internet critic and founder of the Institute of Network Cultures will discuss the dark side of the net. The mental state of internet users is tragic. Instead of empowerment and self-organisation, what we mostly see around is anger and despair. How did we end up like this? The lecture will zoom in on the widespread techno-sadness that is produced by dominant social media platforms through ‘behavioural modification’ (also known as ‘nudging’) with the aim to keep users coming back to the app, exposing them to even more personalised ads. Instead of empowerment and diversity, we witness a ‘chilling effect’ of hyper conformism, resulting in anger, sadness, depression and loneliness. This is the social reality today.

Geert Lovink is a Dutch media theorist, internet critic and author of Uncanny Networks (2002), Dark Fiber (2002), My First Recession (2003), Zero Comments (2007), Networks Without a Cause (2012), Social Media Abyss (2016), Organization after Social Media (with Ned Rossiter, 2018), Sad by Design (2019) and Stuck on the Platform (2022). He studied political science at the University of Amsterdam (UvA) and received his PhD from the University of Melbourne. In 2004, he founded the Institute of Network Cultures (www.networkcultures.org) at the Amsterdam University of Applied Sciences (HvA). His centre organises conferences, publications and research networks such as Video Vortex (online video), The Future of Art Criticism, and MoneyLab (internet-based revenue models in the arts). Recent projects deal with digital publishing experiments, critical meme research, participatory hybrid events and precarity in the arts. From 2007-to 2018, he was a Media Theory professor at the European Graduate School. In December 2021, he was appointed Professor of Art and Network Cultures at the UvA Art History Department.

All students and faculty members are invited to join this illuminating session on April 11, 2022, at 03.30 pm via the zoom platform.

Reading Skills: Insights from a Historian 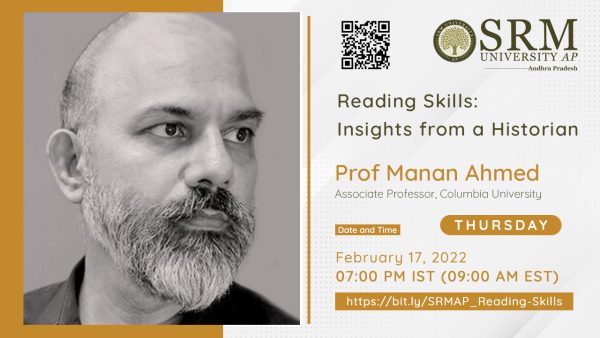 Reading means something different for everyone. Each person develops their reading skills as per their requirements. Some read to find information while others read to mine information. Some read to learn, and some read to laugh, some read to be entertained and some to escape. From reading the labels on new products to newspapers to novels, the objectives of reading can be plenty.

The Department of English is bringing Prof Manan Ahmed – Associate Professor, Columbia University to shed light on the reading approach and the reading skills of a historian in an interesting and interactive session.

Manan Ahmed, Associate Professor of History at Columbia University in the City of New York, is a historian of South Asia and the littoral western Indian Ocean world from 1000-1800 CE. His areas of specialisation include intellectual history in South and Southeast Asia, critical philosophy of history, colonial and anti-colonial thought. Two of his books The Loss of Hindustan: The Invention of India (2020) and A Book of Conquest: The Chachnama and Muslim Origins in South Asia (2016) are published by Harvard University Press.

“Reading Skills” brings to mind dreadful reading comprehension passages given in schools and courses in communication skills. However, reading is much more about finding answers to given questions. It is about finding the questions to ask of a passage, blog, article, literary texts, and historical texts. In this talk and interaction, Prof Manan Ahmed would walk us through a historian’s approach to reading. The programme is intended to be a part of the department’s larger initiative to organise interactions around “Language and Society” to address all kinds of conversations about language, communication, writing, speaking, thinking, and at a deeper level, about connecting with others.

Click here to join this exclusive session and develop an insight on reading through the experiences of our esteemed speaker.

Jairam Ramesh: On the journey of writing 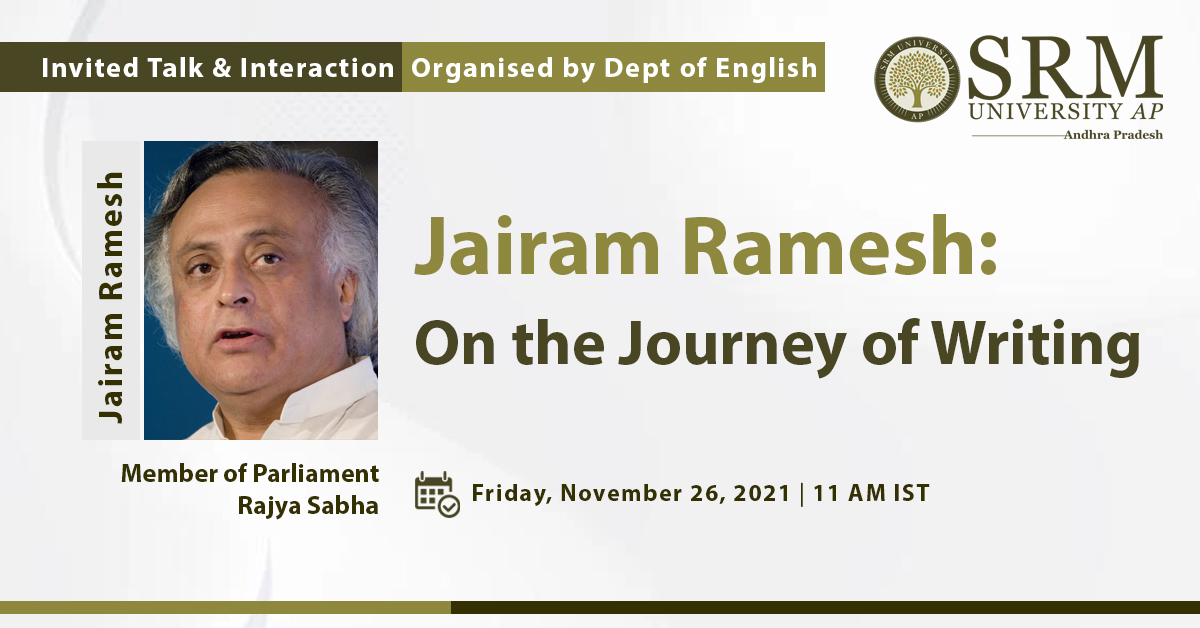 The Department of English at SRM University-AP invites you to an engaging webinar on November 26, 2021, at 11.00 am. Mr Jairam Ramesh, Member of Parliament representing the state of Andhra Pradesh, will be the guest speaker of the day.

Writing is a process of pain and pleasure. Every writer approaches, experiences, and survives it in a unique way. In this talk and interaction, Mr Jairam Ramesh would share his idea and process of writing. His talk would be followed by an interaction about his latest book The Light of Asia: The Poem That Defined The Buddha (Penguin, 2021). The talk is intended to be a part of the Department’s larger initiative to organise interactions around “Language and Society” to address all kinds of conversations about language, communication, writing, speaking, thinking, and at a deeper level, about connecting with others.

Jairam Ramesh is presently a Member of Parliament and Chairman of Parliament’s Standing Committee on Science and Technology, Environment, Forests and Climate Change. He was Union Minister between 2006 and 2014 and held several portfolios including Commerce, Power, Environment and Forests, Drinking Water and Sanitation and Rural Development. He played a key role in global climate change negotiations in 2009 and 2010. He is also the author of several well-known books some of which are Green Signals: Ecology, Growth and Democracy in India, Old History, New Geography: Bifurcating Andhra Pradesh, To the Brink and Back: India’s 1991 Story, Indira Gandhi: A Life in Nature, Intertwined Lives: PN Haksar and Indira Gandhi, A Chequered Brilliance: The Many Lives of V.K. Krishna Menon and The Light of Asia: The Poem that defined the Buddha.

We encourage you to make use of this exclusive opportunity to interact with Mr Jairam Ramesh and understand the nuances of the writing process on November 26, 2021, at 11.00 am.