School of Engineering and Sciences

Abstract: We discuss four classical theorems on roots of polynomials. They relate to four different branches of Mathematics, namely, Geometry, Topology, Complex Analysis and Functional Analysis. The theorems are stated below:

Theorem 1 (Lucas). Every root of the derivative of a polynomial lies within the convex polygon formed by the roots of that polynomial.

Theorem 2: The roots of a polynomial vary continuously with its coefficients.

Theorem 3 (Cauchy): If all the coefficients of a polynomial lie in the unit disc D, then all the roots lie in the disc 2D.

Theorem 4 (Bernstein): The norm of the linear operator D (namely the differentiation) on (The space of polynomials of degree at most n on D) is exactly n.

Some Aspects of Quantum Mechanic in Quantum Computing

What are P-Adic Numbers?

Abstract:This is an introductory level talk on p-adic numbers and p-adic analysis. Our primary goal is to give answers to the following questions:
(1) What is the p-adic number?
(2) How are they different from real numbers?

Abstract: In this talk, we will talk about some portion of the Imai’s paper on Generalization of Hecke’s correspondence to Siegel modular forms. Our goal would be to define the Mellin transform on the Siegel space.

Why is the Relationship Between Mathematics, Education & Society Important for Research?

Abstract:“Mathematics is hard!” has been a universal refrain among school children (and often their parents) for as long as we recall. But why do so many children dislike mathematics? Is it the way mathematics is taught – because math teachers follow a “rote-learning” approach instead of making sure students understand the basic concepts? Why are students from marginalized backgrounds/identities disproportionately lagging behind in & excluded from mathematics knowledge production? Or is mathematics really not for everybody?

In this talk, I draw from my PhD research with visually challenged students as well as from years of industry experience to highlight the importance of taking into account social factors in Mathematics Education Research to effectively address the challenges posed by STEM Education – and to work towards a world where mathematics really is for everybody!

Abstract: In this expository talk, we intend to discuss some basic notions related to linear algebraic groups and see some prototype examples.

Abstract: In this talk, we will give a brief survey of the theory of stable vector bundles
on smooth, irreducible projective curves (equivalently compact, connected Riemann surfaces).

Abstract: Habitat edges can have a number of effects on populations, including modifying their patterns of dispersal. Dispersal patterns can influence population dynamics. In this talk, we will explore the possible effects of a pattern of dispersal where the response of organisms to the boundary of a habitat patch depends on their local density. This talk will discuss some mathematical models for the population growth of organisms having diffusing and nonlinear per capita growth inside a patch, but with the likelihood of an individual crossing the patch boundary to leave the patch decreases as the local density of conspecifics within the patch increases. Such behaviour at patch boundaries has been observed among Glanville fritillary butterflies and has been proposed as a mechanism for generating an Allee effect at the patch level. These models predict that the behavior can indeed induce an Allee effect at the patch level even though there is no such effect built into the local population dynamics inside the patch. Also, we will discuss how per capita growth and boundary behaviours impact the Allee effects. The models are relatively simple and are not intended to give a complete description of any particular population but only to verify the idea that the mechanism of density-dependent dispersal behaviour at a patch boundary is capable of altering population dynamics within the patch.

Abstract: This is an introductory level talk on p-adic numbers and p-adic analysis. Our primary goal is to give answers to the following questions:
(1) What is the p-adic number?
(2) How are they different from real numbers?

On Non-Vanishing of Modular L-Functions Inside the Critical Strip

Abstract: Holomorphic modular forms of (integral) weight k are analytic functions on the upper half-plane which are invariant under the action of certain discrete subgroups Γ of SL2(R) and holomorphic at the cusps of Γ. Hecke eigenforms are certain nice functions which span this finite-dimensional Hilbert Space and are simultaneous eigenfunctions corresponding to a class of nice operators on this space called Hecke Operators. The Fourier expansion of Hecke eigenforms around the cusps are arithmetically significant and demand the study of the Dirichlet L-series (and its analytic continuation) associated to it. Riemann Hypothesis in this context predicts that non-trivial zeros of their L function lie exactly on the line of symmetry <(s) = 1/2 and is a long-standing open problem in Mathematics. While Riemann Hypothesis is at present out of reach, one can of course ask simpler questions.

In this talk, we discuss certain partial results on the following related question: Given s = σ + it, a complex point inside the critical strip (outside the line of symmetry), can we quantify the number of Hecke eigenforms f in Sk whose L-value is non-vanishing at s? This is a joint work with Prof M Manickam and Prof V Kumar Murty. Here, Sk denotes the space of modular cusp forms of weight k with respect to SL2(Z).

Abstract: This presentation is based on presently ongoing joint work, where we deal with the sociological, emotional and intellectual impacts of mechanical reproduction of formal knowledge systems - such as those based on mathematical models - in the service of economies of endless repetition and mass reproduction. Symbols and formalisms can carry over across different paradigms of human existence, across both time and space, without the underlying meanings and subtleties necessarily being carryied along. Such nominalization of meanings only gets exacerbated under systems of massive mechanical reproduction. Mathematical models particularly are not just mere vehicles of computation, but play a paradigmatic role in the very realization of today's political economy - being endlessly used to reproduce social relations that suit the interests of power and capital.

Specifically, we analyze a particular, basic microfinance model that aims to mathematize, and thus aid in the management of, micro-lending businesses. We describe how such a model not only tries to construct particular social realities and certain kinds of financial 'common sense' as such, but also how pre-existing normative common sense is likewise codified into the model itself. We argue how such mathematical models have no independent truth value outside of specific historic processes, contexts and paradigms of public common sense - hoping that this allows us to fundamentally shift the culture of mathematical modeling in a way that respects such subtleties of human knowledge in their extremely rich, dynamic, plural, communistic wisdom and creativity.

Our main attempt is to push the discussion not only out of the binaries of 'good/bad models', but also beyond rule-based rationalist imaginations of ethics, into the mundane and emotional - and yet creative, subtle and even magical - daily existence of ordinary people. Existence is marked by social relations of radical inequalities and radical unities. In particular, this also opens up possible directions to pursue intellectually and in practice, when it comes to the question of education.

Abstract: We discuss some problems related to the unboundedness of Betti numbers of families of affine curves defined by Numerical semigroups. We also indicate possible connections, with the help of examples, between the unboundedness of the last Betti number and the Cohen-Macaulayness of the projective closure of these affine curves. (Joint work with Ranjana Mehta, Joydip Saha & Pranjal Srivastav)

Abstract: In the late eighties, Powers initiated the study of 1-parameter semigroup of endomorphisms on B(H). This was further studied intensively by many others during the last three decades led by William Arveson. Although from the physics point of view, 1-parameter theory is the most important one, from the mathematical perspective it is not necessary to restrict oneself to 1-parameter, i.e. the half-line [0, ∞) and we could replace the half-line by any ‘reasonable semigroup’ like convex cones in higher dimensional Euclidean space. One of the nice features is that the basic theory stays intact while there are significant differences between the 1-parameter theory and the n-parameter theory. I will explain one such phenomenon. In particular, I will define the basic examples of E0-semi-groups, i.e. the CCR and CAR flows associated to isometric representations of the semigroup P. In the multi-parameter world, CCR flows need not be isomorphic to its opposite, a sharp contrast to the one parameter situation.

Applications of Geometry of Numbers and Quaternions of the Number Theory

Certain Quasi-Analyticity Results and Their Application in Fourier Analysis

Conjectures of Minkowski and Woods in Geometry of Numbers

Structures of Exclusion in STEM and by STEM: Gender, Race, Caste and Ability 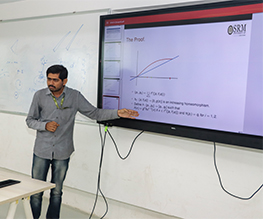 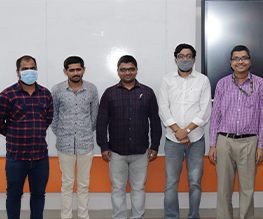