Our students are going places. Literally.
As part of semester abroad and exchange programs, summits and conferences, students get to travel overseas, gain new experiences and widen their world view. This exposure to diverse cultures also creates a platform for deeper learning and appreciation of the many pressing issues facing societies around the world. 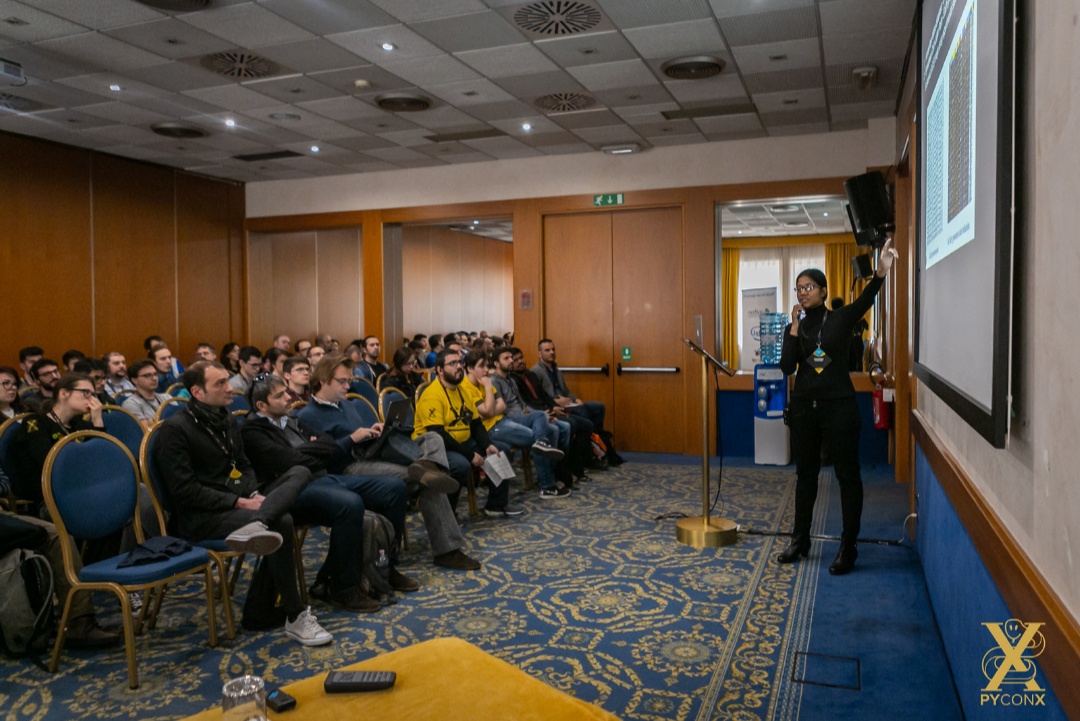 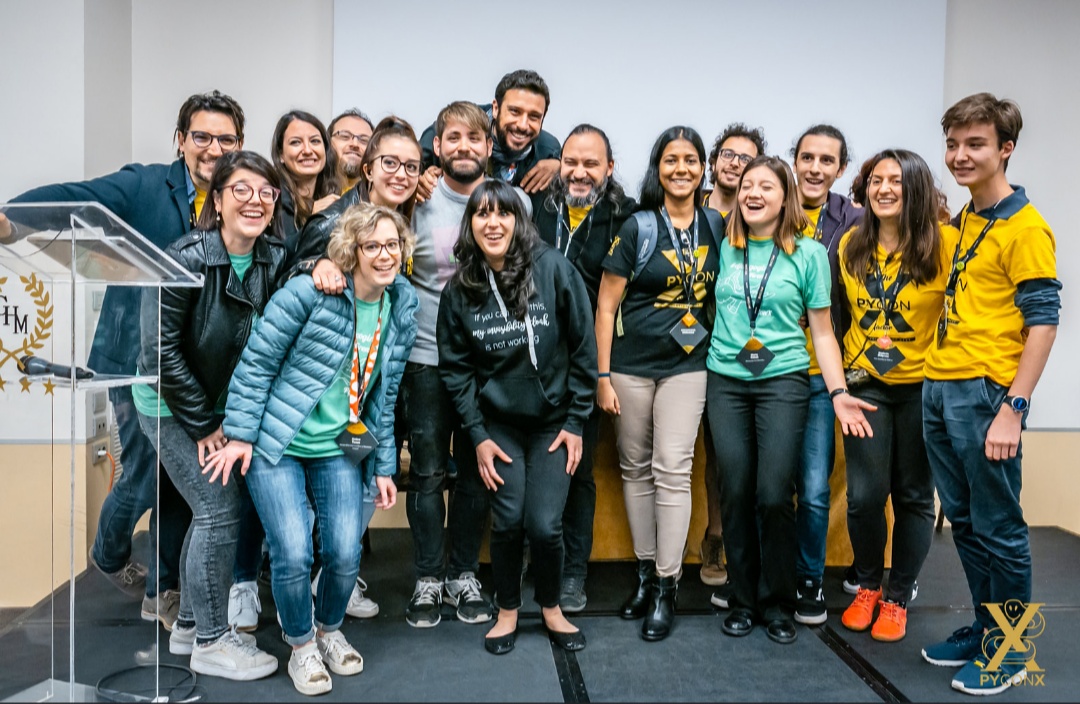 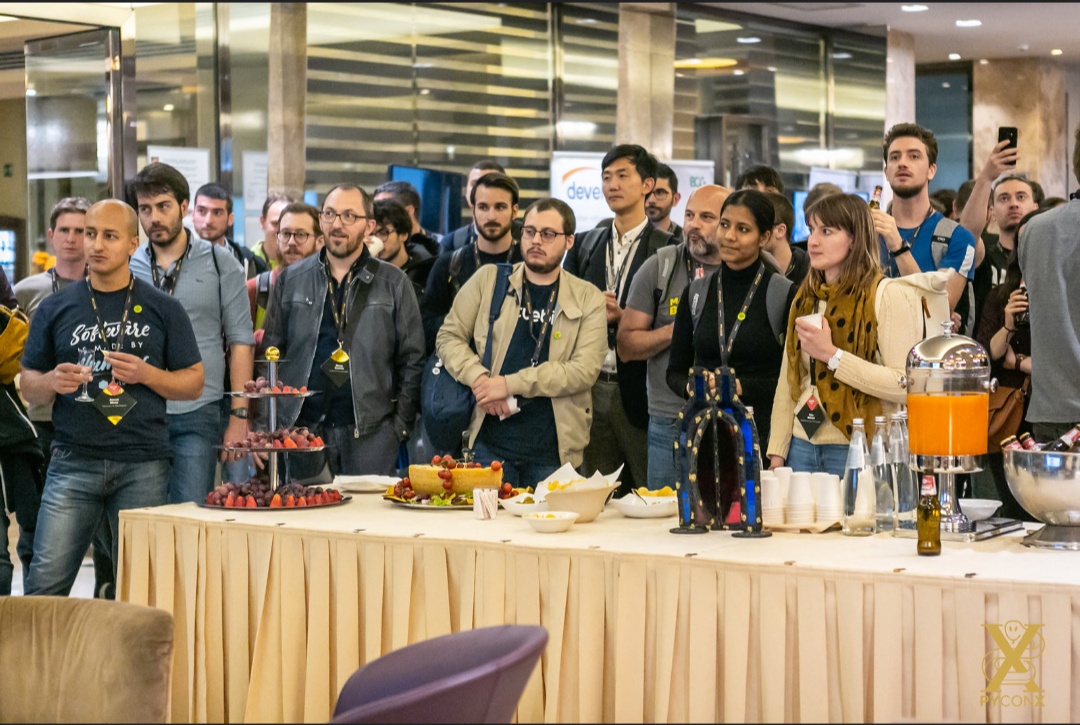 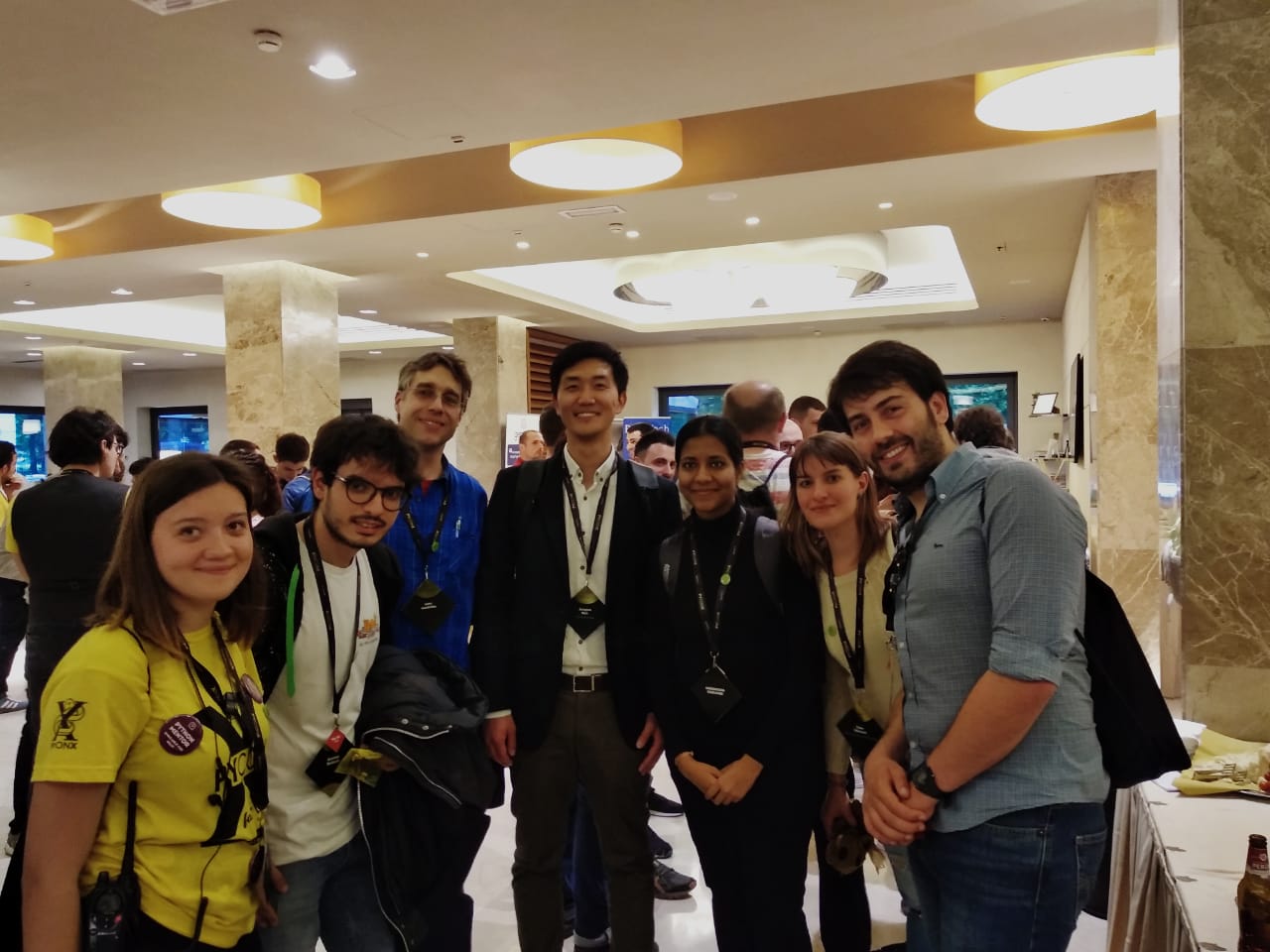 All good things come to an end and so does PyCon Italy. This was my first trip abroad and that too in the always beautiful city – Florence, Italy!

Stayed at the Grand Hotel Meditarraneo, just 15 minutes’ walk from the city centre (how convenient for first timers!). My talk was on cross modal transfer learning -  I spoke a bit about GANs, stacked VAEs and other methods to simulate this very interesting neurological phenomenon called synaesthesia - where the cross wiring of neural networks in the brain produces mixed response of two senses (e.g. coloured sounds) and then I demonstrated some of the work that I did during my last semester.

I had a diverse and wonderful audience of about 400 people - some data scientists, some researchers, developers, and students. Got some positive feedback as people reached out to discuss it in detail during coffee breaks, lunches and parties as well. 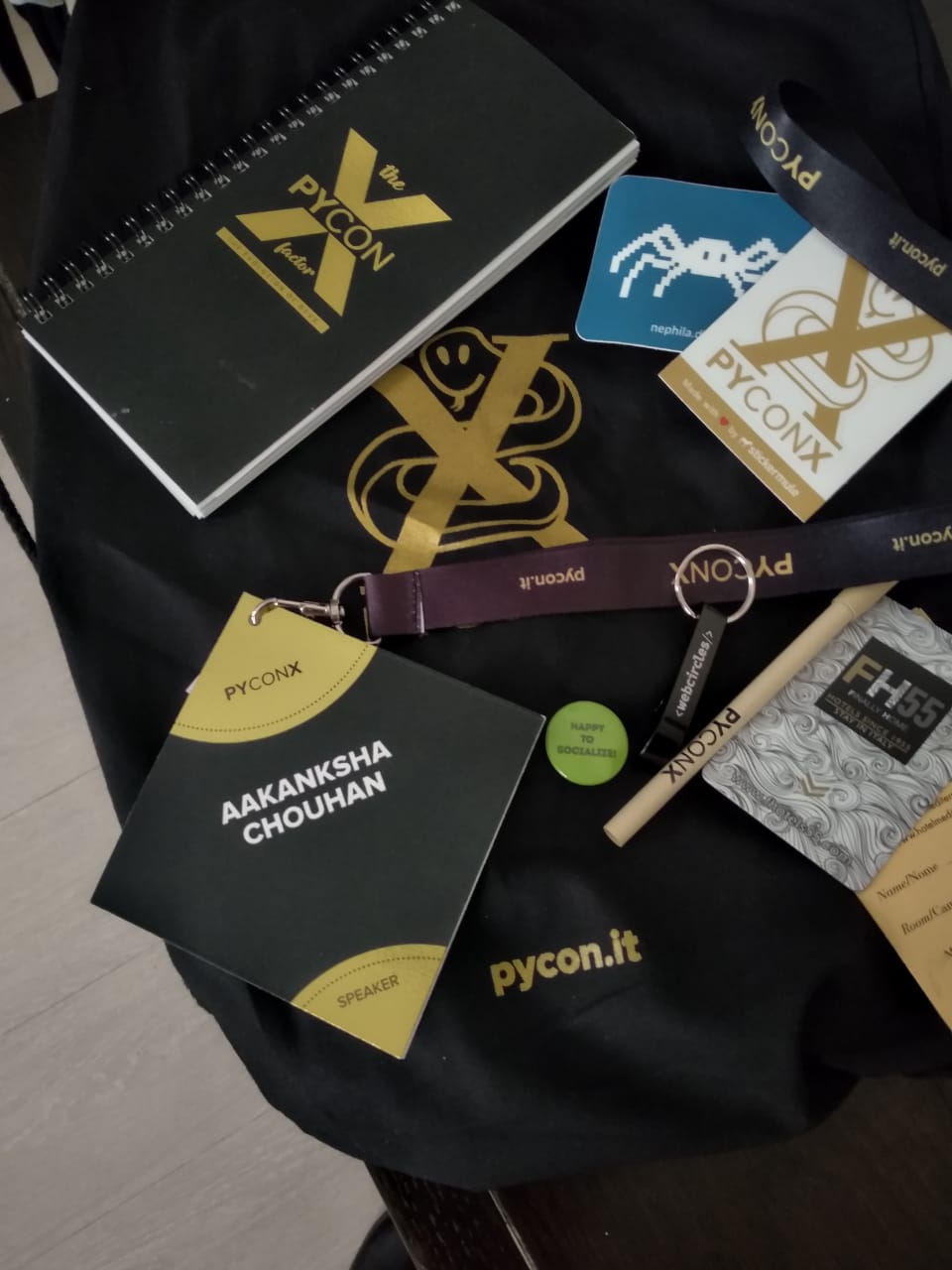 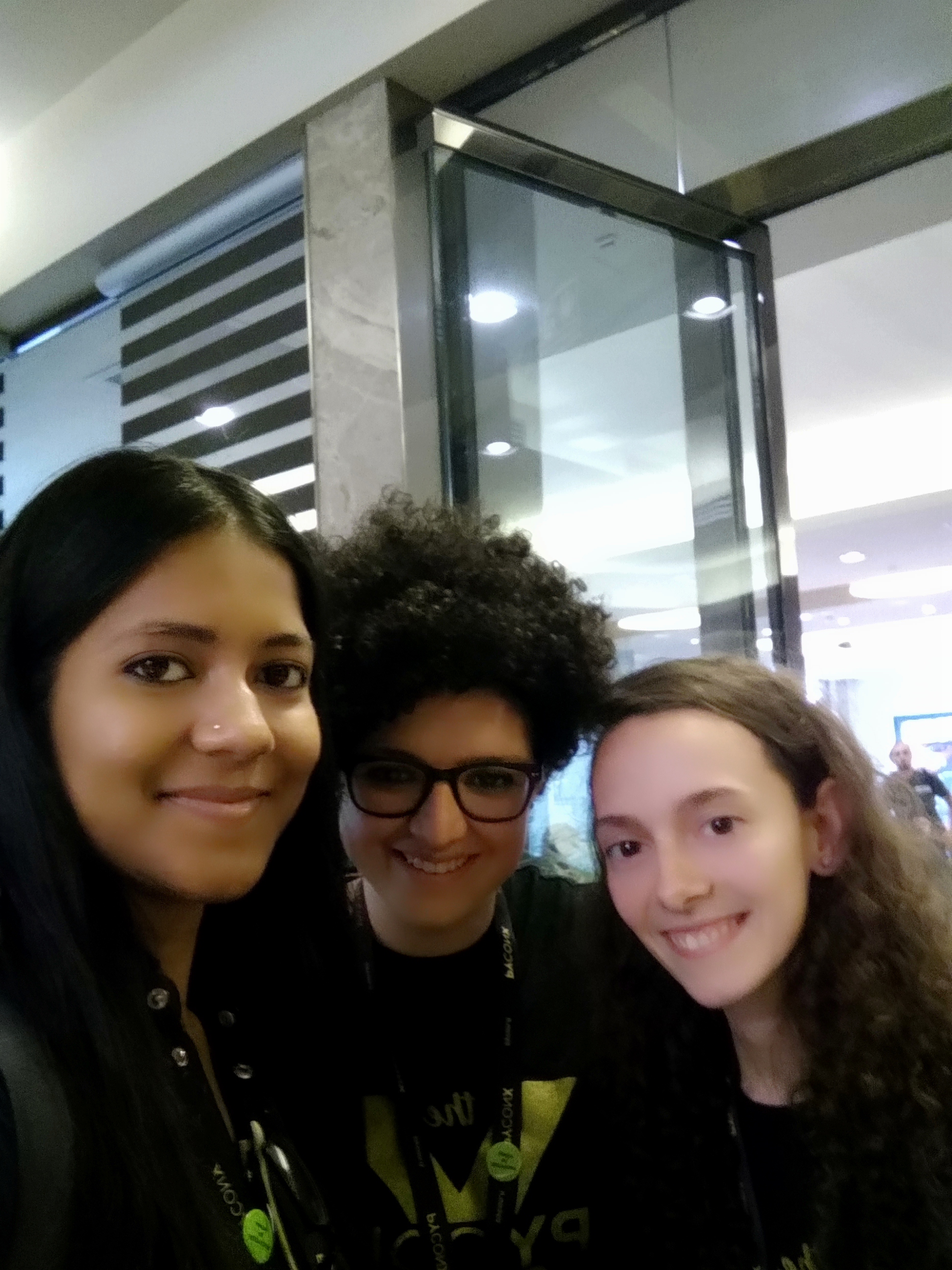 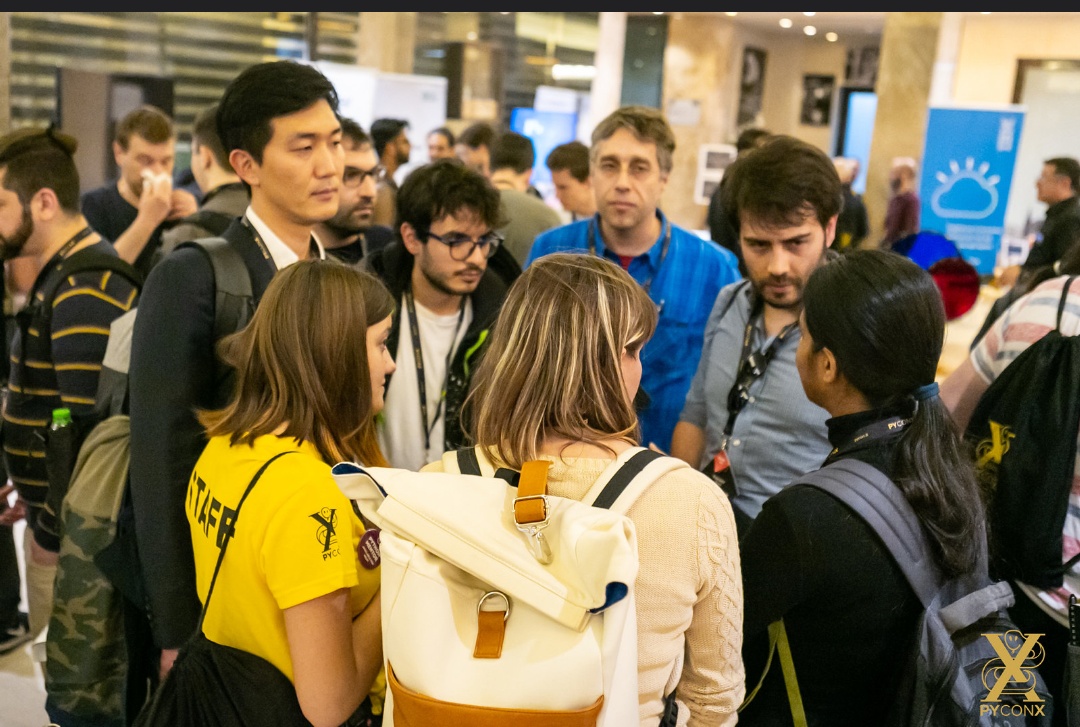 Even though I haven't had much experience participating in such conferences I can still confirm that this one was really well organized - from parallel tracks for talks to social events. Being the youngest (among attendees and speakers both) was a little intimidating but I soon realized how welcoming the Pythonistas community is towards people irrespective of their level of knowledge, experience and differences. There were some really amazing keynote speeches and well, my favourite was of course - From Science with (Data) Love: make others love data the way you do - by Paula Gonzales who told the story of how she got into one of the most celebrated fields in technology today - Data Science.

A bunch of great talks, meeting people from different cultures, connecting with like minds, making sure not to miss out on the amazing Italian cuisine, exploring the authentic side of Florence with locals, making a lot of friends, and, yes - taking lots of pictures to bring my own little Italy home with me, is what I did during my stay in the heart of Italy - the ever beautiful city, Florence!

In another distinction and example of learning beyond classrooms, SRM AP teams qualified for the Collider Cup, the annual event of Sutardja Center for Entrepreneurship and Technology (SCET) at UC Berkeley.

Also, students got to join some of UC Berkeley’s best known clubs on Machine learning VR and Robotics. Plans are underway to compete at TIECON 2019, the world's largest entrepreneurship conference.

This latest triumph at the GitHub headquarters in San Francisco caps a record season of back to back wins including five at LA Hacks.
Team members Agniswar Paul, ECE, Miran Junaidi, CSE, and Rajarshi Mazumder, CSE won the Best IoT Hack Prize for their machine learning + IoT based smart camera footage analysis system. 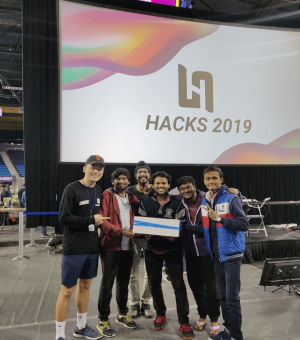 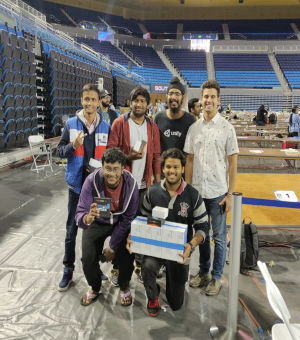 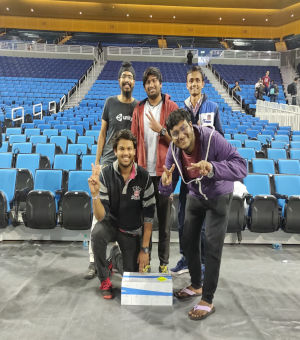 A team comprising of 3 from Next Tech Lab AP (Agniswar Paul, Fahad Kamraan and Miran Junaidi) and 2 from Next Tech Lab KTR (Tamoghna Sarkar and Rajandeep Singh) who are currently doing their semester abroad at UC Berkeley won 5 top prizes at LA Hacks 2019, at University of California Los Angeles:

More than 170 teams from across the globe participated in the hackathon hosted by Major League Hacking (MLH). The SRM AP team built a real time Image Cognitive Eyes application (RICognEYES) that provides real time voice assistance for the visually impaired. The device is a pair of wearable glasses with a ear piece.

They beat competition from teams across the country including Stanford, Harvard and other leading schools from USA and Canada. The same AP students were also part of the teams that won SF Hacks recently along with other members from Next Tech KTR.

Koushik Bhargav CSE SRM AP and head of Satoshi lab at Next Tech lab, Sauradeep Das, CSE SRM KTR and Agniswar Paul, CSE SRM AP (all three presently in UC Berkeley for the 2019 semester abroad program) taking in the technological wonders at ETH Denver, Colorado, the world’s biggest Ethereum hackathon and conference, Feb.14-17.  “It was one the best conferences I have attended, got to meet amazing people working on Blockchain technology from all over the world,” says Koushik.  It was great because Satoshi lab focuses completely on Blockchain technology.”  Koushik and his colleagues shared ideas with developers, Blockchain startups, mentors and developing hacks. “Many more amazing events lined up for our semester in University of California, Berkeley.” MTH Junaidi was one of the youngest Indians to speak at an international PyCon, presenting his work at Next Tech lab to over 400 people from across the world (including researchers, developers and other prominent technology industry professionals).

Given Python programming’s language dominance in the software industry, PyCons are crucial for developers and researchers.  This one was sponsored by industry heavyweights Microsoft, Appier, MySQL, E.SUN Bank, and Trend Micro. SRM AP also runs PyData Amaravati, a meetup group sponsored by the Python Software Foundation and NUMFocus and which focuses on Python data science applications.  MTH Junaidi is one of the co-organizers along with Shubham Rao and Saurabh Ghanekar. At Next Tech Lab AP, they work on projects in the fields of artificial intelligence, augmented and virtual reality, IoT and cryptocurrencies. Five students from SRM AP - Tuhin Sarkar, Aayusi Biswas, Vatsal Rathod, Pushya Mitra and Abirami Ravishanker - all engineering freshers, are the first cohort of the start-up semester at University of California Berkeley and Silicon Valley to learn the ways of top entrepreneurs. From meeting industry leaders to winning prizes at pitch competitions, the students aced through the semester. While in Berkeley, they worked on several group and individual projects, from topics as abstract as looking for extra-terrestrial life to predicting real estate market prices in Brooklyn. This team of freshers competed alongside graduate students and managed to grab the Bronze medal at Inaugural Playscape @Calspark. Also, they were shortlisted as one of the top 10 entrepreneurial teams in over 100 teams in the Saturdja Centre of Entrepreneurship and Technology, going on to compete for the prestigious Collider Cup. They went as young minds ready to learn and came back with the Silicon Valley mind set and the motivation to better lives!

Aaditya Jain’s (CSE) incurable fascination with cloud computing, web designing (classes hosted by Python), concepts of IaaS, SaaS, had him taking copious notes, practice and revise theories almost every day. The result? A super amazing internship for 50 days in Greece. CulturePolis in collaboration with Artia Nano Engineering vetted numerous resumes that arrived at their desk- from AIESEC. However, Aaditya Jain of SRM University- Andhra Pradesh received a call within almost a few days. CulturePolis is a private non-profit organisation based in Corfu, Greece belonging to the Civil Society Organisations – CSOs). It operates mainly in Europe and the Mediterranean Basin. The organisation’s main aim is to contribute – through research, analysis, debate and dialogue, as well as targeted action in information / awareness across verticals. The company in association with Artia Nano chose Aaditya for their new project to build a globally compatible website and connect it to the Cloud. The 19 years old packed his bags and immediately left for Greece on March 7, 2018!

For 50 days, Aaditya was reporting to work at the Peristeri office of Artia Nano Engineering. He would pull 7 hours’ shift for 5 days a week and his work would primarily involve improvising on the old website, creating a new one and integrating functions with cloud servers. He reported directly to Vasileios Laopodis, Founder of CulturePolis and there was “learning every day”.

“Things were amazing! Living in Greece has always been my dream and the internship was nothing short of a dream coming true. I made friends from Czech Republic and Greece. I celebrated Greek Easter along with the natives. I tasted Souvlaki and a lot of interesting Greek recipes. Time flew by!” says Aaditya.

He is now back with his enriching experience from his summer and believes that the exposure taught him the value of strategic planning and work ethics and helped him enhance his technological skills immensely. “A good internship can do wonders and if given the opportunity, you must grab it no matter what,” concludes Aaditya.

FROM POLLUTION CONTROL TO AI AND SILK WORM DNA! “At the WSEN summit, The mayor of Kyoto spoke of the measures his city has been taking to reduce pollution as did Motohide Yoshikawa (former UN ambassador). Switching gears - my opening presentation was on the science-tech vertical, duality of science, Artificial Intelligence and Virtual Reality start-ups. How’s this for a success story? Masataka Hosoo, the CEO of a textile company told us how he teamed up with a biotechnology company to create silk that glows in blue light. How? By DNA modification of silk worms with the help of jellyfish DNA. Masataka Hosoo is also one of the MIT Media Lab Director’s Fellows. A video message from Yoshinori Ohsumi, Cell biologist, and Nobel prize winner spoke of the importance and advantages of attending such summits (as though we had any doubts!) . Final take away; Knowledge is an endless ocean; Anything can be learnt more easily through peer learning. “At the Doshisha Retreat Center we were part of an international student group from Mexico, North America, Indonesia, China, Philippines, Palestine, UK, Australia, Saudi Arabia and Japan. Firstly, I have to say, the experience of sharing a room with two Japanese and one Saudi was amazing!

Our committee being science and technology, our discussions were mostly about how technology has changed our lives, artificial intelligence, virtual reality and renewable energy -  how it can be used for future generations.  Ideas generated were submitted to the Ministry of the Environment. Prof. Yoshinori Ohsumi (Nobel Prize in physiology), shared his ideas on the future of the world with nuclear weapons. “The World Student Environmental Network is “by the students” and “for the students”. It holds global summits every year with goals like sustainable development and environmental protection.   I was a delegate representing India, Nepal in the Disaster and Resilience committee whose main goal was pretty basic but yet most important - to figure out disasters incidence in local regions; to examine and quantify the major causes; provide sustainable solutions with resilience-oriented outcomes to eradicate the effects; study the symbiosis of culture and disaster. As part of the programs and proceedings we met with former UN Ambassador: Prof. Motohide Yoshikawa, the Mayor of Kyoto City, Daisaku Kadokawa and heard from Dr Naoyuki Kato    (Director in Earthquake Research Institute).  The earthquake simulation drills gave us the real feel of earthquakes of various magnitudes leading up to a discussion session on disaster resilience.

Disasters aside, we also got to meet Masataka Hosoo, innovator and brand director of HOSOO, a Kyoto-based traditional kimono textile maker, who is bringing Nishijin-Ori weaving techniques and textiles to the forefront of the design and fashion world. In fact, the city tour was of Kinnkaku-ji and the Nishijin Textile centre. “