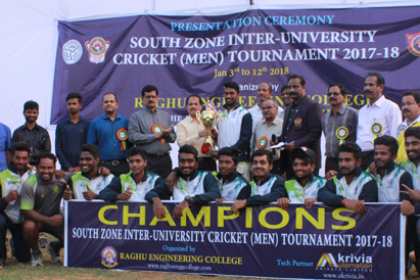 Visakhapatnam: Mahatma Gandhi University (Kottayam) clinched the South-Zone Inter-University Cricket Trophy for Men (2018) by defeating SRM University (Chennai) by 40 runs in the finals which were held at the Raghu College Ground in the city on Friday.

After a super knock from Anand Krishna’s 64 and Abdul Baziri’s 39, Sijomin Joseph’s 28 in 20 balls laid the foundation for MG University’s decent total of 212 in 40 overs.

Chasing a total of 213 on a hard wicket, SRM University team was bundled out for 172 in 35.3 overs mainly due to the failure of the top and the middle  order.  MG University’s bowlers Sijomin Joseph (3 for 20) and Sreehari S Nair (3 for 31) proved that they are the strong pillars of their team.