Speaking on the subject of women’s empowerment and gender biases in all walks of life, Member of Parliament, Meenakshi Lekhi made it a point to explain how the notion applies not only to those who have succeeded in specialised careers like space research. 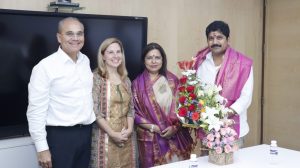 “Empowerment cannot be viewed from the narrow angle of haves and have nots. Women in power can also suffer from patriarchy. Empowerment means not having to depend on others, it is not linked to how one dresses or what one does for a living. It is about mental equality, knowing where you belong, how you express yourself, being self-assured, not letting external factors impede one’s growth and freedom.”

On the subject of government programs that empower women directly (as individuals and responsible for their families), Ms. Lekhi drew the distinction between programs like ICDS (Integrated Child Development Services) and current programs like Ujjwala Yojana, Jan Dhan Yojna, Mudra Ayojana, and Awas Yojana where subsidies and financial assistance goes directly in the hands of women. “These programs demonstrate our trust in the capabilities of women to take care of themselves and their families. It is about helping the most vulnerable, providing help where it has not reached before.”

Ms. Lekhi is a Supreme Court of India lawyer. In July 2016, she was appointed as chairperson of the Committee on Privileges of the Lok Sabha in Parliament. She was awarded the “Best Debut Women Parliamentarian” award by Lokmat in 2017. She has led the debate on a wide variety of matters such as bails, trials, appeals, criminal writs, the Prevention of Corruption Act/Customs Act/FERA prosecutions, domestic violence and Family Law dispute. Lekhi has been a part of the Drafting Committees for Bills like “Women’s Reservation Bill” and “Sexual Harassment of Women at Workplace (Prevention, Prohibition and Redressal) Bill”. She also played an active role in the drafting of the Criminal Law (Amendment) Bill, 2013 which provided for amending the existing laws related to sexual violence. She has been in the National Commission for Women’s (NCW) special Committee, and Chairperson of Special Task Force on Women Empowerment Association.