Prof A K Sood on “Doing Science Without Borders”: Collaboration and curiosity among researchers will lead to impactful multidisciplinary solutions of the 21st century 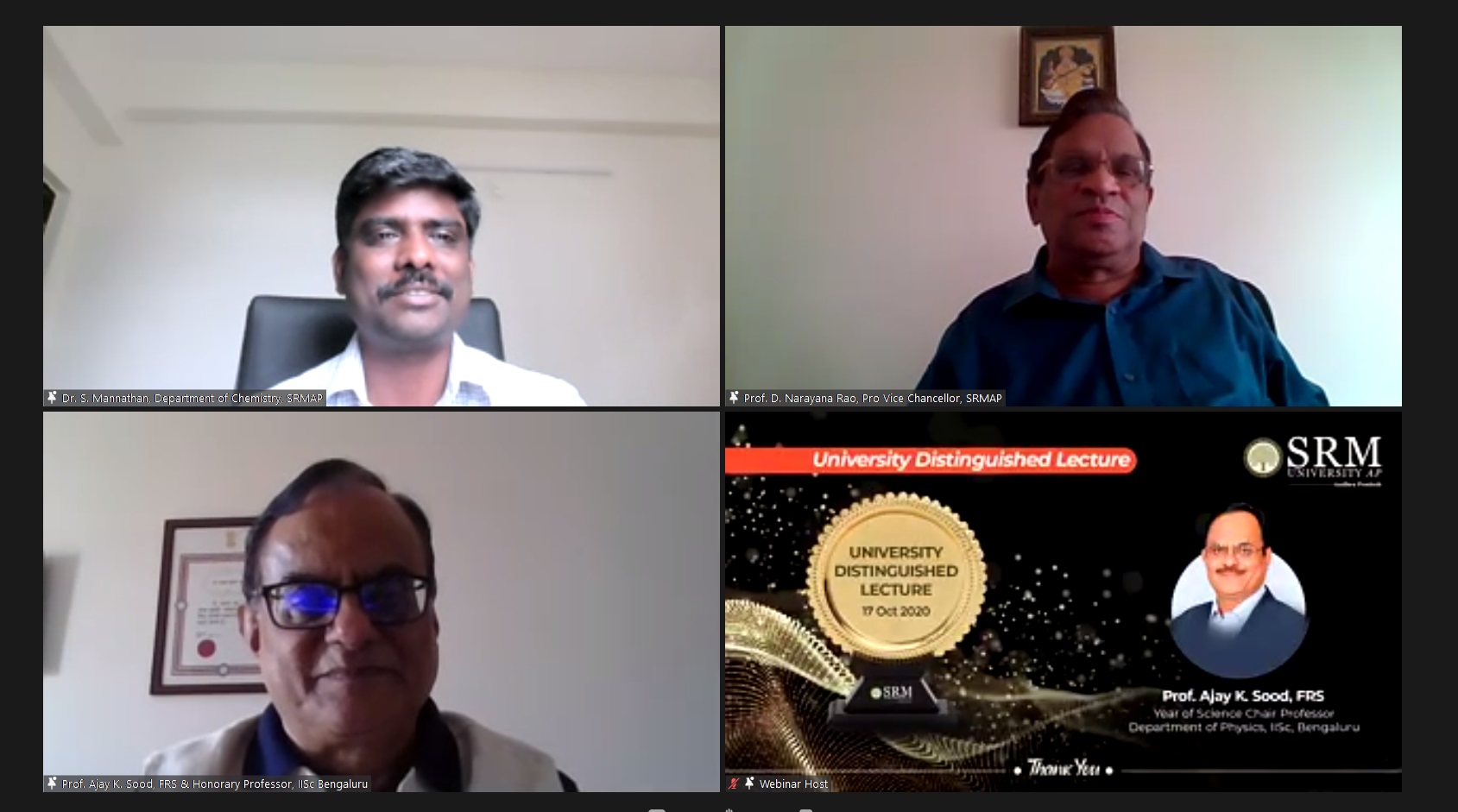 The first University Distinguished Lecture on “Doing Science Without Borders” commenced with an inaugural welcome speech by Prof V S Rao, Vice-Chancellor, and Prof D Narayana Rao, Pro-Vice-Chancellor, SRM University-AP, Andhra Pradesh. Prof V S Rao expressed their gratitude to Prof Ajay K Sood for his gracious presence. Prof Narayana Rao emphasized that under the University Distinguished Lecture series, the talks will be delivered by eminent scientists from India and abroad that would be of immense benefit for students and the faculty and researchers. He further mentioned, “Doctors, researchers, engineers and scientists from several fields of knowledge around the world worked together to confront corona outbreak with an unprecedented spirit of collaboration. Also, NEP advocates and emphasizes that the societal need of the 21st century require broad-based multidisciplinary research and education”.

Prof Ajay K Sood, Fellow of the Royal Society, FRS and Honorary Professor, Indian Institute of Science (IISc), Bengaluru, narrated three stories of his recent experiments and advanced research work, namely “Emergent flocking behaviour seen in nature: Laboratory experiments”, “Crystallization of Glass: Machine Learning in condensed matter Physics”, and “Bacterial Nano Heat Engine: Getting bacteria to work”. He begins by stating that back in 1944, a profound physicist Schrodinger introduced the concept of “aperiodic crystal” which led to the understanding of genetic molecules, enunciating the importance of inter-disciplinary applications of scientific works. In his first narrative, he speaks of the flocking movement among birds, bacteria, locusts, and human beings as well. He brought the same experiment in his laboratory where he used 2 particles, energized them, and identified their flocking pattern. He observed that the velocity of movement between the two particles differ, which can be applied to particle sorting. This experiment has applications in biology, where bacteria and/or cells can be sorted and separated and also in autonomous cars.

While explaining his second experiment, Prof A K Sood mentioned that he studied the devitrification or the tendency of glass particles to crystallize over time to reach a state of stability from its metastable state. He used supervised Machine Learning to predict where crystallization will occur in glass. His team trained the system to identify the hard and soft particles of the glass. His experiments concluded that Machine Learning (ML) helps in identifying the soft particles, which possess the tendency to move and crystallize over a long period of time. Further, Prof A K Sood and his team of collaborators developed bacterial nano heat engines by mimicking the biological motors in our body which produces energy for living beings to function. Using bacterial activity, they made heat engines and are advancing their research work to recognize the practical applications of the nano heat engines in cars, batteries. The bacteria heat engines is a highly promising technology of the future.

Prof A K Sood narrated his laboratory stories to explicate the splendor of multidisciplinary research which can be used to solve basic problems. He said, “The key to successful scientific research is to collaborate with experts beyond their own domain. Communication and appreciation of views of an open mind enable the scientists to understand the various phenomena. Students and researchers should be curious which will lead to research having various interdisciplinary applications that will make an impact across various domains.”