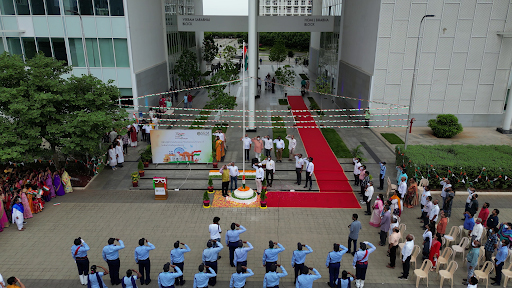 SRM University-AP celebrated the 75th Independence Anniversary of the nation in all its pomp and glory. As India has surpassed 75 years of independence and is propelling towards a glorious future of many more accomplishments, the nation was painted with the colours of courage, peace, and prosperity as part of the Har Ghar Tiranga campaign launched by the Prime Minister. In keeping with the vibe and vigour of freedom celebrations resonating all over the nation, the SRMAP NSS unit and the Department of Student Affairs visited houses in the nearby villages to promote the campaign.

The celebrations started off with the hoisting of the National Flag ceremony by the honourable Vice-Chancellor Prof VS Rao. He conveyed his Independence Day greetings to all and paid homage to all the brave warriors of our nation including Mahatma Gandhi, Subash Chandra Bose, Chandra Shekhar Azad, and all other known and unknown heroes of the land who lived, fought, and died for the nation.

Prof V S Rao also highlighted the role of Science & Technology in taking the country forward along the paths of sustainable and inclusive development. ”From green revolution and nuclear technology to our space missions, entrepreneurial evolution, and contribution to covid abatement, Science & Technology has effectively spread to every possible sector”, he remarked. He urged the student community to mould themselves up to be active collaborators in the process of nation-making. He also accentuated that SRM-AP is replete with opportunities for students to navigate their skills in all possible ways.

Students staged a colourful array of cultural programmes including songs and dance performances expressing their patriotic spirits. Prof VS Rao felicitated students who have brought laurels to the institute for their outstanding skills in various curricular and extra-curricular activities. Certificates were distributed to the participants of the Blood Donation camp. And the celebration came to a closure with the prize distribution ceremony to the winners of various games and sports events conducted on campus as part of the Azadi ka Amrit Mahotsav celebrations. 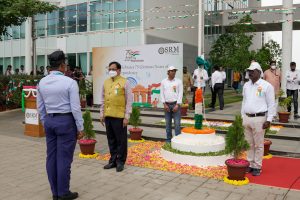 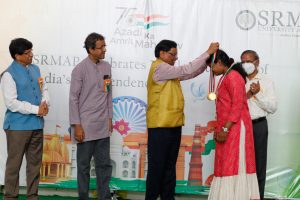 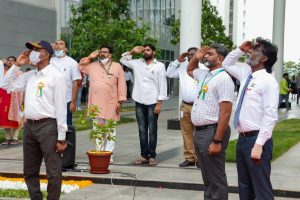 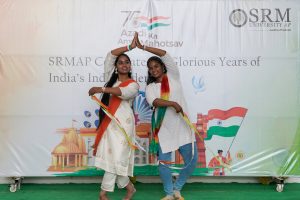