“Research is a culture, adopted through practice.” Professor Prasant Mohapatra

“Research is a culture, adopted through practice.” Professor Prasant Mohapatra 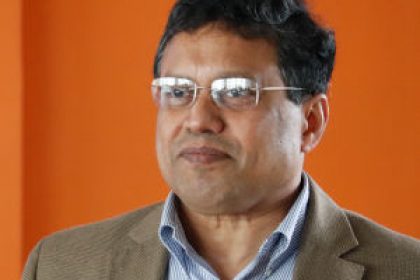 “Problems in the world are not discipline specific. Universities need a wider scope in research,” was one of the points raised by Prasant Mohapatra, member of SRM AP Board of Governors, in his symposium on research methodologies. “Research responds to societal needs. To remain contemporary and dynamic it is necessary to reinforce it regularly with current best practices.”

At its root, university led research in the arts and sciences provides researchers the satisfaction of solving unsolved problems and raise the level of understanding of fundamental concepts and their practical significance. It is now a widely accepted view that most academic research has a long term impact on the advancement of society and mankind as a whole.

Speaking from his years of experience as Vice-Chancellor for Research at University of California, Davis and as Professor in the CS department, Mohapatra raised a key point on how research can be carried out successfully at universities, “Research works best when it is a culture adopted through practice.” A culture, as he described it, where “not everyone has to do it, certainly not for glory, not a switch that can be turned on or off, and not something that can be scheduled to fit one’s own timetable.”

“While foundation building research is critical,” he said, “it is better to expand the breadth of knowledge on a selected topic.” This point was raised in light of the noted high percentage of unsuccessful attempts at research globally. “But once you build a culture of research you can develop a method for analytic thought for one’s own ideas,” he said.

Mohapatra recommended researchers spend more time on defining the research/problem formulation as new innovations can be discovered in the process; Using the example of fields as diverse as ant colonies, biological evolution, game theory and social networks, Mohapatra explained how concepts and methods benefit from inter-disciplinary cooperation, a cross-area approach. In closing, Mohapatra went on to address issues around professional ethics, multi-disciplinary and collaborative research.