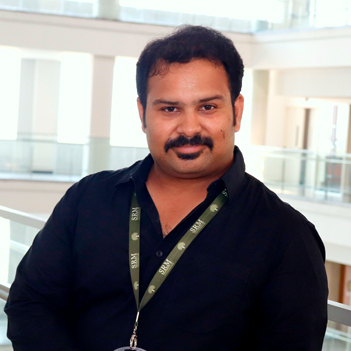 Dr. Sutharsan Govindarajan, Assistant Professor, Department of Biological Sciences, SRM University-AP has been awarded the prestigious ‘Early Career Fellowship’ grant by DBT/Wellcome Trust India Alliance, funded by the Department of Biotechnology (DBT) and the Wellcome Trust, United Kingdom. The fellowship supports outstanding young scientists to pursue high-quality research in the field of biomedical science and establish themselves as independent researchers in India. Dr. Sutharsan sought a total research grant of 1.1 crore for a period of 5 years as a DBT/Wellcome Trust India Alliance Early career fellow. The India Alliance grants are highly competitive and is based on the profile of the applicant and the novelty and the importance of the proposed research. Nationwide only less than 10 Early Career grants are awarded every year. Dr Sutharsan is a highly accomplished scientist, having published research articles in highly reputed journals, including the most prestigious Nature and Nature Microbiology. Through this fellowship, Dr. Sutharsan will establish an independent research laboratory at SRM University – AP with the support of Prof. Jayaseelan, Head, Department of Biological Sciences, and the fellowship supervisor of the project.

In this project, Dr. Sutharsan plans to venture and explore the biology of a novel class of bacteriophages called Jumbo-phages. “Bacteriophages, which are the most abundant biological entities on the planet, are viruses that infect bacteria but do not harm humans. Jumbo-phages, as the name suggests, are giant viruses with large genome. A sneak peek into their lifestyle during my postdoctoral research led me, to realize that these phages build fascinating complex structures inside the bacteria they infect. Such complex structures are well known to be formed in eukaryotic cells like human cells but was not thought to be made by bacteriophages, which have evolved billions of years before eukaryotes. Thus, studying how such cellular structures are formed by jumbo-phages provides a unique opportunity to investigate the origin of complex life” informs Dr. Sutharsan. He also explains that the proposed research has several biotechnological applications such as phage therapy and synthetic biology.

Dr. Sutharsan further shares, “This is one the best fellowships, a young scientist can obtain in India. It is an honour, prestige and a recognition for the scientist as well as to the University. In the next 5 years, I anticipate major fundamental discoveries in the field of bacteriophage biology and evolution”.