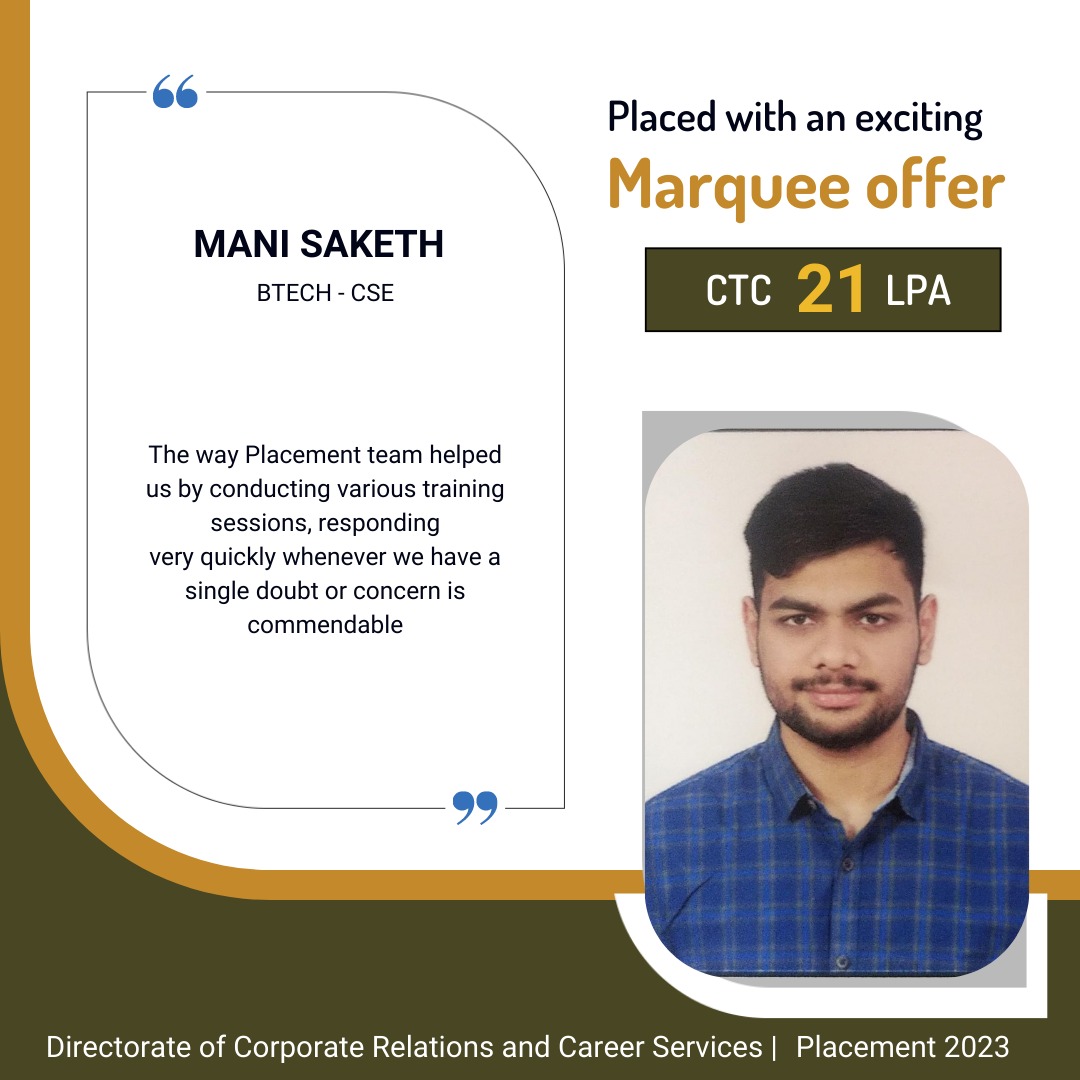 Mani Saketh is beyond happy to get placed with a Marquee offer of CTC 21 LPA in his third year of under graduation at the Department of Computer Science and Engineering. He is placed at Western Digital, the company that introduced hard discs to the world. An immense commitment to obtain a Marquee offer was the driving force of his placement journey. He believed in keeping hope, persistence, and perfection alive at heart as they procreate the momentum to learn anything.

The company he got placed in basically works on HDD’s, SSD’s, Pendrive, NAND Flash-based Storage devices, etc. It is a hard disk drive manufacturer and data storage company. It is also the parent company of SanDisk. It was his internship that led him to this enormous placement offer.

He is in awe of the robust support system that the Directorate of Corporate Relations and Career Services is. “They helped me a lot by bringing many Marquee companies at the beginning, which made me work faster on my skills. The way they helped us by conducting various training sessions, responding very quickly whenever we have a single doubt or concern is commendable”, said Mani Saketh with most gratitude.

He was part of the Marquee Training Batch, where he got the freedom to practice whatever he wanted. But at the end of the day, all he wanted was to show some progress. Students who attended the Marquee training session used to solve coding questions, and if anyone failed to find the solutions, they had discussions in peer groups. This helped the students with the benefits of self-learning. The interactions among students during the problem-solving sessions encouraged their communication skills and improved their efficiency in resolving any coding question.

Mani Saketh thanked Mr Laxmanan Angu Raju, one of the senior managers of the Directorate of CR&CS, for having hope and confidence in him. According to him, getting placed at Western Digital wouldn’t be possible without the help of Ms Akhila, CR&CS executive. The mentoring and training of the placement team stayed with him throughout the placement session. He also thanked Dr Jaya Lakshmi Tangirala, his placement mentor, who made him realise the importance of CSE core fundamentals in the initial days of placement training.

As of now, Mani Saketh wants to convert this internship offer to a full-time offer and would like to work in the organisation for at least three years. Later, based on his interest, he wants to study further and grow in the company.