The power of merging art with science is beyond our imagination. This amalgamation can pull off things that may seem insurmountable without the assistance of the other. Professor Hiren Deva Sarma, Guest faculty of the Department of Computer Science and Engineering, has developed a computational technique to find the similarity between the given songs in a pool. His paper titled An Approach to Discover Similar Musical Patterns has been published in IEEE ACCESS, a Q1 journal with an impact factor of 3.36. 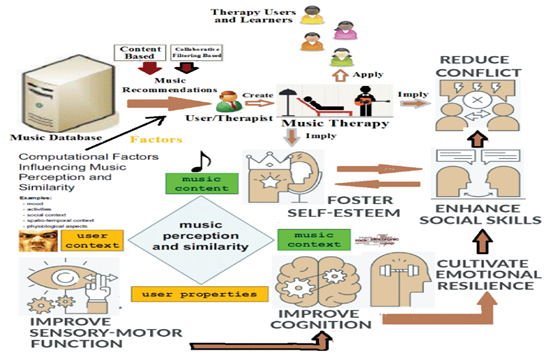 An algorithm has been developed to find the similarity between given songs. The song pattern similarity has been determined by knowing the note structures and the fundamental frequencies of each note of the two songs under consideration. The statistical concept, Correlation of Coefficient, is used in this work. The correlation of Coefficient is determined by applying the 16 Note-Measure Method. If the Correlation of Coefficient is near 1, it indicates that the patterns of the two songs under consideration are similar. Otherwise, there exists a certain percentage of similarity only. This basic principle is used in a set of Indian Classical Music (ICM) based songs. The proposed algorithm can determine the similarity between songs, so alternative songs in place of some well-known songs can be identified in terms of the embedded raga patterns. A digital music library has been constructed as a part of this work. The library consists of different songs, their raga name, and their corresponding healing capabilities in terms of music therapy. The proposed work may find application in the area of music therapy. Music therapy is an area of research that has been explored significantly in recent times. This work can also be exploited for developing an intelligent multimedia tool applicable in the healthcare domain. A multimedia-based mobile app has been developed encapsulating the abovementioned idea that can recommend alternative or similar songs to the existing ICM-based songs. This mobile app-based music recommendation system may be used for different purposes, including entertainment and healthcare. As a result of the applications of the proposed algorithm, similar songs in terms of raga patterns can be discovered from within the pool of a set of songs. A Music Recommendation System built on this algorithm can retrieve an alternative song from within the pool of songs as a replacement to a well-known song, which otherwise may be used for particular music therapy. Results are reported and analysed thoroughly. The future scope of the work is outlined.

Explanation of the research

A computational technique has been developed to identify a particular song similar to another in terms of its embedded raga pattern. Indian Classical Music (ICM) based songs are considered in this work. As a result of the application of the proposed technique, it is possible to identify similar songs in terms of their raga patterns from within a pool of songs. Subsequently, a similar alternative song can be recommended for different applications, including music therapy. If we consider music therapy, an alternative medicine (note: here, medicine is the song) is possible to recommend due to the proposed technique. This algorithm will find many applications in the domain of music information retrieval (MIR) and music recommendation systems (MRS).

Practical implementation of the research

In the future, the researchers look forward to exploring the music therapy capabilities of Indian Folk Music (IFM) like Kamrupia Lokgeet, Goalparia Lokgeet, and Baul Geet. Understanding the similarity and dissimilarity of the above-mentioned folk songs with Indian Classical Music (ICM) from computational musicology perspectives is another objective of the proposed research work. The researchers also aim to develop Music Recommendation Systems (i.e., applications) considering the songs mentioned above (ICM + IFM) and the different requirements of the users.