Dr Writoban Basu Ball, Assistant Professor, Department of Biology, received an outlay of Rs.26.34 lakhs from DBT, Government of India to pursue research on “Targeting Kennedy pathway of cellular phosphatidylethanolamine biosynthesis as a common therapeutic strategy against protozoan parasites like Leishmania donovani, Trypanosoma brucei and Entamoeba histolytica.” Disease-causing intracellular parasites present serious health challenges, which could be fatal if left untreated. For example, Leishmania donovani and Trypanosoma brucei are the causative agents of visceral leishmaniasis and sleeping sickness, respectively. Entamoeba histolytica causes amoebiasis and 100,000 people die each year world-wide from amoebiasis-related complications. The current treatment regimen against these diseases consists of drugs that possess severe toxicity and drug resistance. Toxicity is detrimental to health and drug-resistance causes unresponsiveness of the drug to the parasite, rendering the drug ineffective. Therefore, it has become imperative to discover new drug molecules to combat these diseases. 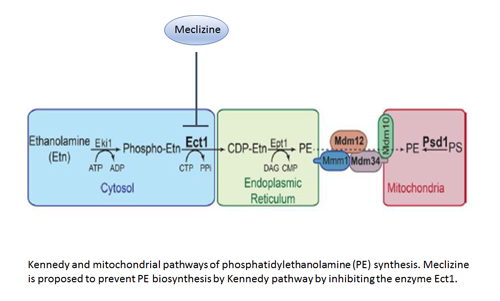 In his study, Dr Writoban proposes to repurpose an FDA-approved drug meclizine, which can be used as a potential drug against dreadful parasitic infections. He explains. “One rational way to discover new and effective drugs entails identifying pharmacological targets against unique yet essential parasite metabolic pathways which are either absent or redundant in hosts (in the present case humans). One such central metabolic pathway in L. donovani, T. brucei, and E. histolytica is the Kennedy pathway for the biosynthesis of phosphatidylethanolamine (PE), a major lipid molecule of the cell. Without the presence of this lipid molecule, the cellular membranes (plasma membrane, organellar membranes) cannot form. Therefore, the Kennedy pathway is indispensable to parasite survival. On the contrary, in humans, although the Kennedy pathway is present, other pathway of PE biosynthesis is predominant. Hence, the Kennedy pathway offers a potential target to disrupt PE biosynthesis in these parasites without causing any side effects in the human host. In this context, meclizine, an over the counter anti-nausea drug, has been shown to disrupt the Kennedy pathway.”

Dr Writoban’s research is oriented to find safe cures for dreadful parasitic diseases that mostly plagues the underprivileged section of the developing countries like India, and countries of the sub-Saharan Africa. He believes, “The successful implementation of the proposed research scheme would benefit a lot of underprivileged people belonging to the underdeveloped and developing countries, as well as reduce the disease burden of those countries.” Further, Dr Writoban emphasizes, “Getting the grant is only the job half done. I would like to guide this proposal to a fruitful completion so that it can benefit people who need it most. I really want to take this project beyond the bounds of a mere academic exercise.