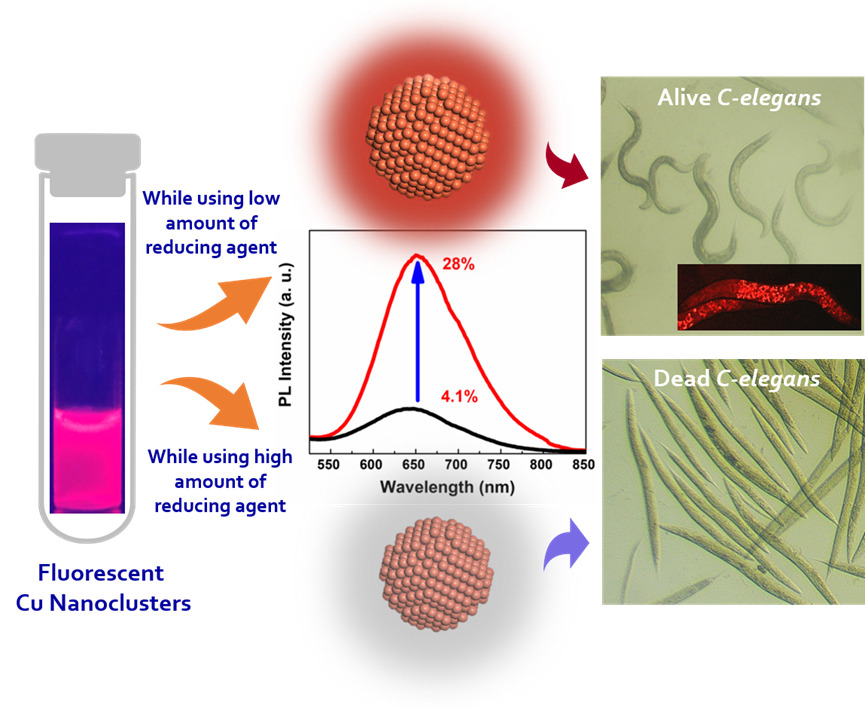 Inspite of being a plentiful and inexpensive metal, the use of copper nanoclusters is limited in bio-medical research because of their toxicity and low stability due to its easily oxidizable nature. It also has a low quantum yield. The interdisciplinary publication of the researchers at SRM University-AP successfully addressed these constraints, resulting in strong fluorescence, superior colloidal stability, and non-toxicity of copper nanoclusters for bio imaging applications. The research was a collective work of Dr Manjunatha Thondamal from the Department of Biological Sciences, Dr Mahesh Kumar Ravva and Dr Sabyasachi Chakrabortty from the Department of Chemistry along with their PhD scholars; Mr Kumar Babu Busi, Ms Kotha Jyothi, Ms Sheik Haseena, Ms Shamili Bandaru and Ms Jyothi Priyanka Ghantasala.

The article titled ‘“Engineering colloidally stable, highly fluorescent and nontoxic Cu nanoclusters via reaction parameter optimization” was featured in the prestigious Q1 journal RSC Advances (IF: 4.036), published by the ‘Royal Society of Chemistry’. They successfully prepared the protein stabilised copper nanoclusters inside the aqueous medium with exceptional optical properties. To the best of their knowledge, the reported colloidal stability and quantum yield of their as-synthesized Cu NCs are the highest reported in the literature, where the emission wavelength is in the red region. Also, optimised copper nanoclusters showed excellent biocompatibility towards solid cancer cell lines and C. elegans as in vitro and in vivo environments. Thus, these red colour luminescent copper nanoclusters were becoming a suitable fluorescent probe for deep tissue penetration, photodynamic, photothermal and diagnostic applications.

Metal Nanoclusters (NCs) composed of the least number of atoms (few to tens) became very attractive for their emerging properties owing to their ultrasmall size. Preparing copper nanoclusters (Cu NCs) in an aqueous medium with high emission properties, strong colloidal stability, and low toxicity has been a long-standing challenge. Although they are earth-abundant and inexpensive, they are comparatively less explored due to their limitations such as ease of surface oxidation, poor colloidal stability, and high toxicity. To overcome these constraints, we established a facile synthetic route by optimizing the reaction parameters, especially altering the effective concentration of the reducing agent to influence their optical characteristics. The improvement of photoluminescence intensity and superior colloidal stability was modelled from a theoretical standpoint. Moreover, the as-synthesized Cu NCs showed a significant reduction of toxicity in both in vitro and in vivo models. The possibilities of using such Cu NCs as a diagnostic probe towards C. elegans were explored. Also, the extension of this approach towards improving the photoluminescence intensity of the Cu NCs on other ligand systems was demonstrated.